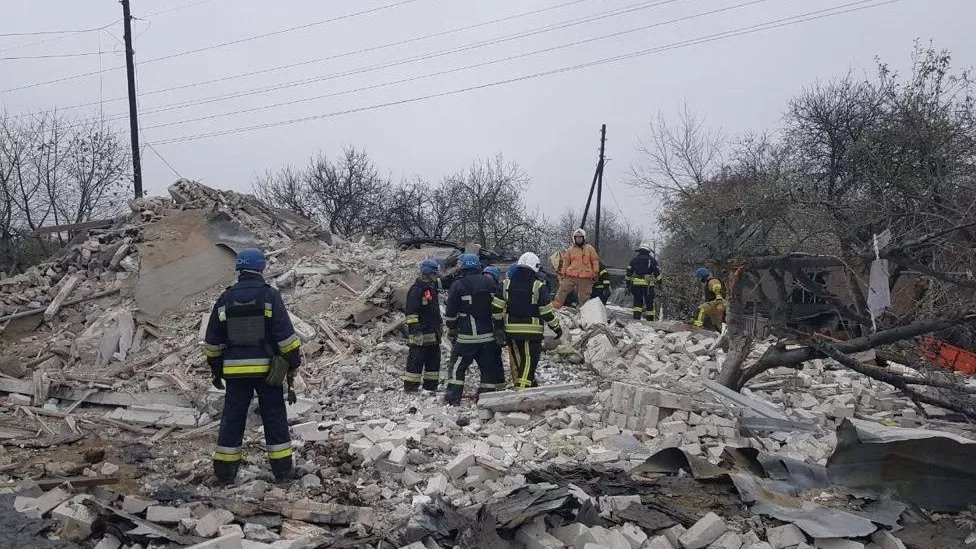 President Volodymyr Zelensky stated that 10 million without power after Russian strikes on Ukraine's energy system and regions such as Odessa, Vinnytsia, Sumy, and Kyiv were most affected.

On Thursday morning, Russia launched yet another round of rocket, drone, and missile attacks over Ukraine. The most recent attacks - the sixth major assault since early October, according to Ukrainian authorities - are said to be aimed at destabilizing the nation's energy infrastructure.

The number of fatalities from the strikes is currently at least seven but is certain to increase.

In his nightly video message on Thursday, Mr. Zelensky stated, "We are doing everything to normalize the supply." Six cruise missiles and five drones were successfully shot down by Ukraine's air defense.

Less than two days after one of its biggest bombardments to date, Russia bombarded Ukraine once more on Thursday, this time with missiles, striking additional energy facilities and other civilian sites.

The Ukrainian presidency reported that seven people were killed after a missile struck an apartment building in Vilnyansk, close to the southern city of Zaporizhzhia.

According to officials, recent targets included a weapons complex in Dnipro and a gas production plant in the east.

The capital city of Kyiv, the western city of Vinnytsia, the port city of Odesa in the southwest, and Sumy in the northeast are the primary areas affected.

Mr. Zelensky claimed that Russia had cut off the heat and electricity to his countrymen.

The Ukrainian leader reiterated his requests for "full protection of the Ukrainian sky" from its allies, stating that doing so would persuade Russia to cease the conflict.

Moscow has attempted to use Kyiv's "unwillingness" to negotiate as justification for its most recent military actions.

After Russia unleashed what Ukraine claimed was the greatest bombing of civilian infrastructure of the war earlier this week, Kyiv had its first snowfall of the season as authorities announced that they were trying to restore power nationwide.

The Donetsk region saw the most intense fighting thus far in the conflict. Troops withdrawn from Kherson city in the south, which Ukraine reclaimed last week, were added to Russian forces. The nearby towns of Soledar and Bakhmut were among the targets of artillery fire from Russian forces, as stated by the Ukrainian military.

Early on Thursday, several targets included Dnipro, one of the biggest cities in Ukraine, which is located near Zaporizhzhia. According to Prime Minister Denys Shmyhal, a missile-producing factory called Pivdenmash has been attacked.

23 people, including a teenager, were hurt after the city was shelled, according to another official.

The most recent civilian fatalities could not be reliably verified by the BBC.

Around the city of Nikopol, which is southwest of Zaporizhzhia, 70 shells are alleged to have landed, cutting off the water and electricity to thousands of homes.

State-owned energy company Naftogaz, meanwhile, claimed that a "massive attack" had been launched against its gas-producing facilities in eastern Ukraine.

Officials in the northern Kharkiv region and the southern Odesa region recorded further infrastructure hits as well as casualties to civilians.

One location where air raid sirens could be heard was in Kyiv, the capital. Mobile phones began to ping at around 08:00 local time (06:00 GMT) with official warnings of a new missile attack across Ukraine.

Local air defenses reacted by launching five drones made in Iran and four cruise missiles, according to military authorities.

Russia, according to President Zelensky, wanted "only as much pain and suffering as possible" for its citizens, not peace.

After another massive attack on Tuesday, Ukrainians are taking air raid warnings seriously.

That day, Ukraine came under attack from dozens of long-range missiles, in what was thought to be the war's heaviest onslaught.

One rocket that landed outside of Ukraine and killed two people in a village in Poland close to the shared border late on Tuesday night stoked concerns about a potentially hazardous escalation in the battle.

The friends of Kiev noted that although President Zelensky initially insisted that this had been launched by Russia, it actually appeared to have originated from Ukrainian air defenses.

Jens Stoltenberg, the commander-in-chief of NATO, asserted that Moscow was ultimately to responsible for igniting the conflict.

While many of Russia's Tuesday missiles were shot down, those that did hit infrastructure targets managed to significantly deplete Ukraine's power supplies.

This is a modern Russian technique used in response to defeats on the battlefield, and its effects are now becoming more noticeable.

On Thursday morning, a layer of snow covered the city of Kyiv. Many people's houses are currently without heat as a result of emergency power outages.

The senior American military has cautioned that Kyiv's odds of winning the conflict by reclaiming all of the Russian-occupied territory are "not high, militarily."

Gen. Mark Milley did, however, allow that there might be a "political solution" if Russia decided to leave, declaring that the invading power was "on its back."

After retaking the southern city of Kherson, there has recently been confidence on the Ukrainian side.

On Thursday, new Russian strikes struck cities all over Ukraine, the most recent in a string of assaults that have crippled the nation's energy infrastructure as winter descends and the temperature drops.

Numerous bombardments have cut off the water and electricity to millions of Ukrainians, but the Kremlin has attributed the suffering of civilians to Kyiv's refusal to engage in negotiations rather than to Russian aggression.

The board of directors of the UN nuclear watchdog issued a resolution on Thursday expressing "grave concern" about Russia's failure to heed requests to stop measures against nuclear facilities in the conflict-torn Ukraine.

The 35-nation board of governors of the International Atomic Energy Agency asked Moscow "to abandon its baseless claims of ownership of the Zaporizhzhia Nuclear Power Plant."

Along with urging Moscow to "immediately withdraw its military and other personnel from the plant, and to cease all actions against, and at, the plant and any other nuclear facility in Ukraine," the IAEA released a statement.