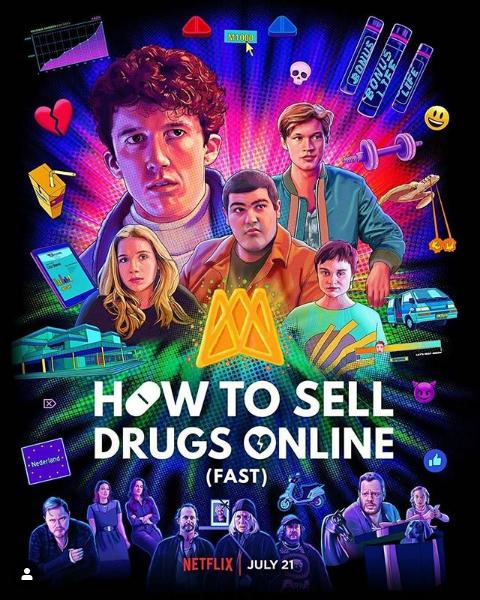 Have you seen how to sell drugs online fast TV shows? If you are a teenager’s parent, you know that they will expose to everything more than you. Social media, smartphones, and easily accessible drugs are exacerbating teens more than ever.

Although you don’t give much freedom to your kids, they will be many possibilities that they may expose to drugs. The best example of this is the German TV show How to Sell Drugs Online (Fast). Read further to know about the reel and real story of How to sell drugs online fast.

Moritz Zimmermann (Maximilian Mund), a 17-year-old drug kingpin, learned how to move without detecting large amounts of the drug, such as MDMA. Moritz begins to tell the story of how it all started. It was an affair with a girl Lisa Novak (Lena Klenke). They have been friends since childhood. Lisa studied abroad for a year in the US, mostly in New York.

When she’s back, Moritz can’t wait. He collects all their WhatsApp text conversations in one book and plans to surprise her for Germany’s return. But when she called him from the airport, she said that she needed some space.

Moritz feels anxious and devastated. He did the thing that he never wanted to do. He Logs in to her Facebook account to see what she’s doing. He was distracted by this breakup. For this reason, he could not be able to focus on his business pitch. But his best friend, Lenny Sander (Danilo Camber), completed that on his behalf of him.

The idea of that business is impressive: an eBay-style marketing center for maidens, armor, rare weapons, and other tools to use in online games. Meanwhile, Moritz knew that Lisa talked to the handsome and dashing boy named Rich Daniel Rift (Damien Harding), who turns out to be a resident MDMA dealer at the school.

When he finally logs into Lisa’s account, Moritz is shocked to see his beautiful and charming girlfriend now ecstatic. He logs into her account and sees Lisa’s welcome-home party (Moritz not invited) and messenger conversation between Lisa and Dan and how much “good stuff” he’s going to bring.

Moritz decides to focus on Lisa again and take Dan to where he bought his MDMA. Moritz wants to capture this drug dealing in the camera and want to post it on social media. Although Moritz has less cash, he somehow gets a threatening dealer who has a joint venture to sell his supplies; Moritz uses some simple mobile phone tricks to please the dealer.

Lenny is very angry with Moritz when he knows that Moritz has used some money from MyTems’s startup funds. Moritz smashed that party but could not sell MDMA’s bag because Dan was good enough and got a kick in the teeth by Dan.

Of course, we should have sympathy for Moritz, because he is in a very sensitive situation. Moritz endorsed General Z ‘Philosophy’s voiceover, where he said that today’s millennials always indulge in their mobile phones and get everything they want. He also mentioned the examples of some famous entrepreneurs.

But he did not want to be like other millennials. He reckons that he will eventually be rewarded. “Nerd today, Boss tomorrow,” he said. He started to say about a couple of people like Jeff Bezos that support essential ways to get customers.

Moritz lost his mother when he was quite young, which explains his intimacy with Lisa, but a normal human male can’t give space to her beautiful and young girlfriend when she needs it the most.

If anything, the show has been somewhat focused on recent episodes. It’s tough to get into Moritz’s plan because we do not know much about putting him and Lisa together and keeping them together for years.

The creators did some unique things in the directing. Like in the starting when Moritz said that Netflix is making a series on his story and told views to skip the intro and how to skip their swim coach book about MDMA.

It’s interesting to see how Moritz uses the technology developed by him and Lenny (mostly Lenny) to sell drugs instead of Fortnite tools. And now his drug selling business venture initiates.

How to Sell Drugs Online Fast Tv show Season 2 shows that Young Moritz (Maximilian Mund) is growing his online My Drugs empire, rising to millions of euros. Similarly, he is becoming an egoist person. His Dutch business partner Good Times wants to expand the business and advises to cut off his friends from MyDrugs and become CEO in Rotterdam.

However, when Moritz selfishly mentions his path, there are two scams and vicious moves that lead the Conservatives from the small German town of Rinseln to a dangerous place in the final stages of the Drug Cartel.

Moritz, who is back with Lisa, is lying to her and his family about what he does in his spare time. To make matters worse, Moritz’s mother, Bettina, returns with bad news – she’s going to sell her family name after her.

Moritz hates her, especially since she knows how to break her little sister’s heart. Then Dan’s mother allows them to create bank accounts, and then all of them started to launder the money. No one can suspect that a high school boy now becomes a millionaire.

They can withdraw money and make online transactions, allowing Moritz to buy a house with MyDrugs money. He saves his family in the form of an anonymous buyer, allowing the family to live there without rent, which leads to a favorite party. Now Moritz considered himself as a great loser who never defeated.

Moritz was in a mental and emotional flow after parting ways with Lisa to focus entirely on business. He did not even participate in his experiments (equivalent to the German SAT), but Lisa starts a fire, so they postpone it because Moritz can’t come to the school in time.

She found out that Moritz is the CEO of the MyDrugs empire by herself. She wanted Moritz to stop all of these things. But Moritz did not understand her, and they fall apart.

They chat about the future, and although Moritz never seemed to come to light, he was grateful that Lisa had not left him. He knows that he has been pushing people back recently because of his arrogance and passion for spreading with the times, but he can say that she loves him because she wanted Moritz to get rid of this criminal siege.

However, Moritz still goes downhill and locks his friends’ websites and bank accounts and goes to Rotterdam to pick up the deal. But at the Good Times party, Moritz saw the murder of a girl named Mia when she wanted to resign from this drug company.

She hates to hide in the shadows about how they sold Ecstasy, realizing that Moritz’s worst fears have come true and that he’s in a group. He once lied to Lenny and Dan that Good Times were killers, but now he sees it for the first time.

Moritz returns home upset at the drive home with Morton, but when he tried to warn his friends, they blocked Moritz. They think this is a scare tactic, so they keep quiet about MyDrugs and don’t start a rival company.

Moritz is left without credibility, so frustrating action is needed in frustrating times. He knew Morton would come just as he had killed Moritz’s supplier in a plane crash in Season 1.

In Season 2, after Buba accidentally commits suicide while harassing Moritz’s staff last season, Buba’s mother and drug gang forced teenagers to work with them. Moritz signed a cocaine deal and cut off $50,000 to the perpetrators, but he had to come back when he thinks he is now out of this mud.

He pays another sum to find his friends, and he wants to protect Lenny and Dan from Morton. When Morton goes to kidnap Moritz’s friends, Buba’s people come for him. They chased Lenny and Dane and used them as bait, mocked Morton, and connected him with Tesla before he automatically became a pilot in the Netherlands. However, it is not clear whether he was killed throughout the trip, and he did not bring it back to the Good Times in the final moments of the season.

Dan and Lenny’s hacker girlfriend Kira try to help Lenny start a company to steal MyDrugs clients when it comes to teens. Lenny doesn’t like copying other ideas and codes, but when Kira reveals that he can use the money for his cancer treatment, he comes around and adds that they can now get out of the Moritz’s business.

Lenny built an insecure way on Pebble Watch that could deactivate MyDrugs’ bitcoins and wipe out servers, client lists, and user data so that he would wipe MyDrugs out of existence.

The “Thermal Exhaust Port in Death Star” means the Moritz must respond to the Good Times for losing their golden egg. The show ends with Moritz giving a flash talk to the documentary team about his story, and he chooses to go when asked about choosing a business over friends.

The big revelation is that Moritz is arrested throughout the series, and when the police take him away, he jokes with them about the secrets to success. Now we all are waiting for the third season of this excellent TV show.

The Real Story Behind How To Sell Drugs Online (Fast)

Moritz is the main character in How to Sell Drugs Online (Fast), but the name of the person that started this drug venture in real life is Maximilian S. In 2013, Max began an online shop called Shiny Flakes to sell drugs when he was 18 years old. He started this from his childhood bedroom.

Thanks to his technical hygiene and ability to understand customer habits, he has developed a very successful business similar to the successful Bitcoin worth millions of euros. Unlike the show, Max had no friend to help – he did everything himself. He hid his income as a profit from the web design business but was eventually caught by the police.

How He Was Caught?

Although Max hid his website in the dark web, he made two IRL mistakes and was arrested. He did not use proper mail in one of his packages, so instead of returning it to the sender, they sent it to the mailing center until the package was opened (drugs were found inside).

There are similar cases in the Leipzig region. Another mistake Max made was using the same mailing stations – so the police started analyzing data from several mailing centers and monitoring the stations. Eventually, they found out that Max was sending these packages.

As an experiment, authorities began buying drugs from his website and blocked 40kg of drugs by mail. Eventually, they move out of Max’s house and wait for the sale. Max was confronted by police, who saw the drug transfer. He ran to his house and tried to destroy the hard drives, but he was not enough. Police arrested him and seized 320 kg of narcotics worth 4.1 million euros.

His Partnership With The Show

Max was tried all these as a minor, so he was sentenced to only seven years in prison. He has been serving his sentence since 2015, but he is not your average prison bird. Max is allowed to get out of jail during the day; after hearing that his story is turning into a Netflix show, he shows up on the production set.

From this post, you know all about How to sell drugs online fast TV shows. It is a worth watching show. If you haven’t watched it yet, this weekend will be an excellent time to start binge-watch. If you wish to read more about such a kind of CBD, gambling, and Drug TV show, write the names in the comment section below.