Best 4 Fantasy Movies You Should Have Seen By 2021 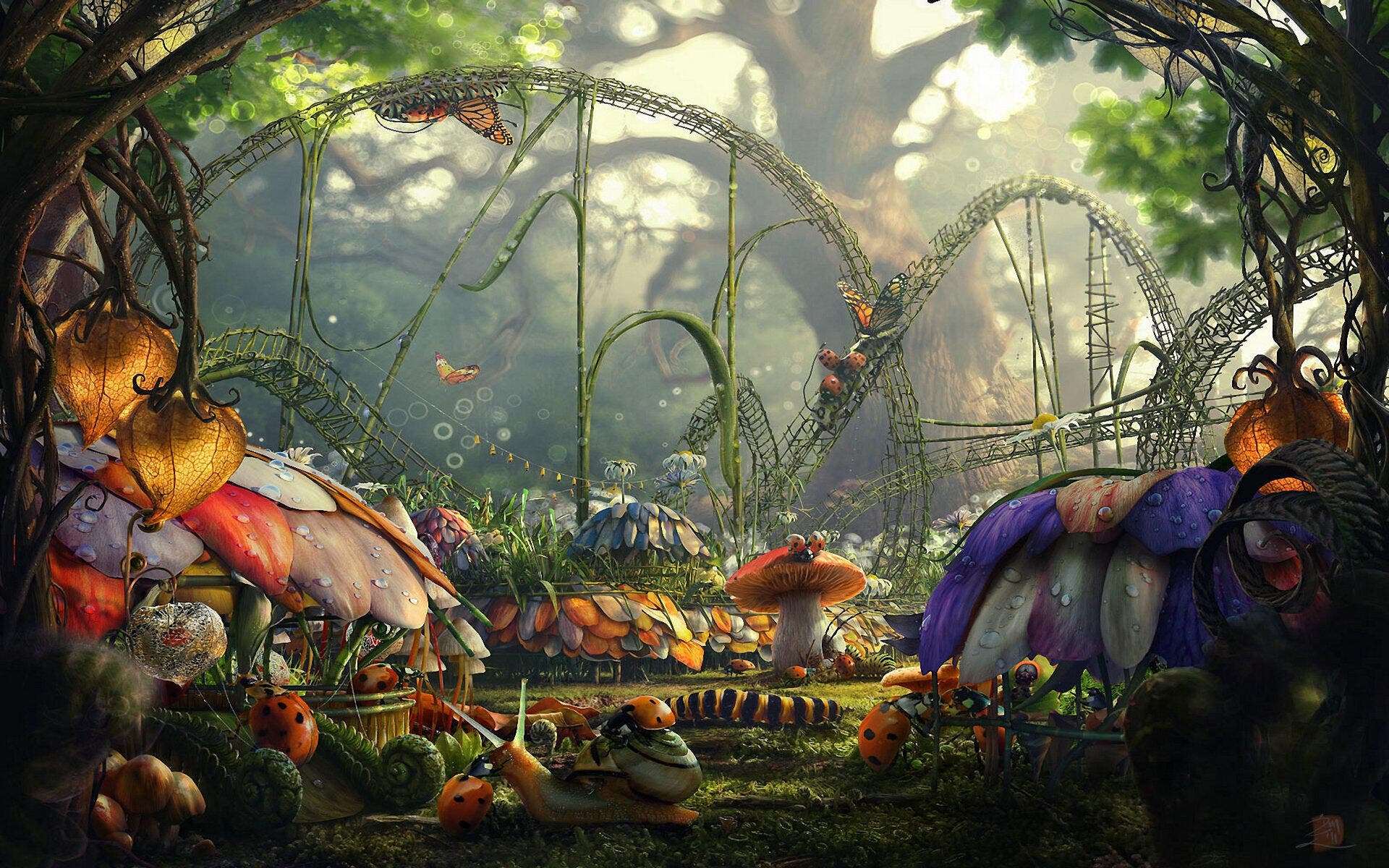 Fantasy films are films featuring extraordinary themes, such as magic, supernatural happenings, mythology, folklore, or exotic fantasy realms, that belong to the fantasy genre. Although the genres overlap, it is considered a kind of speculative fiction alongside science fiction and horror films. Magic, myth, wonder, escapism, and the extraordinary are all common themes in fantasy films.

Raya And The Last Dragon 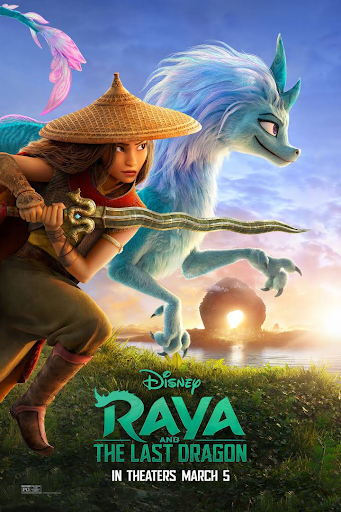 Best fantasy movies in 2021 raya and the last dragon

Raya and the Last Dragon is a 2021 American computer-animated fantasy action-adventure film directed by Walt Disney Pictures and released by Walt Disney Studios Motion Pictures. It is directed by Don Hall and Carlos López Estrada, co-directed by Paul Briggs and John Ripa, produced by Osnat Shurer and Peter Del Vecho, written by Qui Nguyen and Adele Lim, and has music by James Newton Howard.

Walt Disney Studios Motion Pictures released Raya and the Last Dragon in normal 2D, 3D, Dolby 3D, and IMAX 3D formats in the United States on March 5, 2021. As a result of the COVID-19 pandemic's influence on theater releases, the film was made accessible on Disney+ Premier Access at the same time.

It has grossed $132.9 million worldwide, excluding Disney+ Premier Access, as of June 14, 2021, making it the eighth highest-grossing film of the year. It has received positive reviews from critics, who praised the animation, visuals, action sequences, characters, musical score, voice acting, and messages, despite some criticism for the lack of actual Southeast Asian representation among the film's cast.

Best fantasy movies in 2021 raya and the last dragon 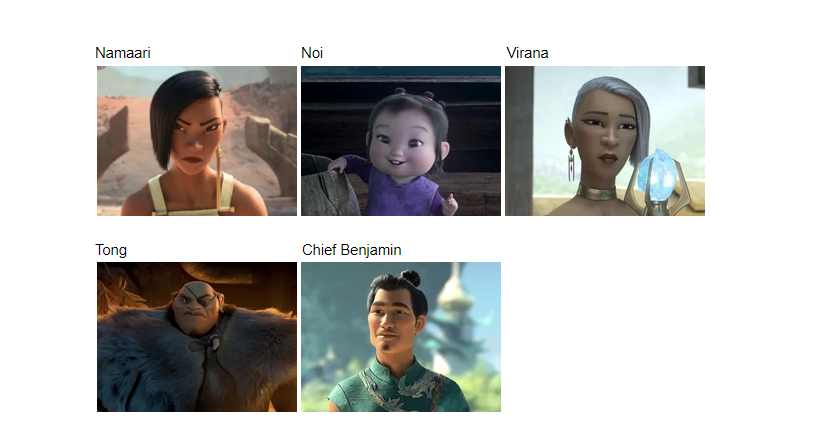 Five hundred years ago, the land of Kumandra was ravaged by evil spirits that attack and petrify dragons. Sisu, the last dragon, concentrates her magic into a gem and banishes the Druun. A power struggle for the gem divides Kumandra's people into five tribes - Fang, Heart, Spine, Talon, and Tail. Raya travels across the land to find Sisu in order to help her recover the four missing pieces. After six years, Raya finally manages to summon Sisu who admits she did not create the gem, but only used it on behalf of her siblings. 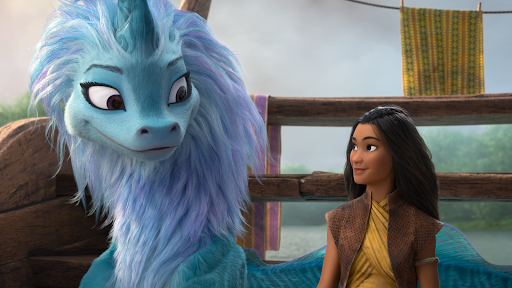 Sisu turns back into a dragon, saves Raya, but ends up sparing Namaari. Raya's companions rescue the people of Fang using the gem pieces while Sisu's death causes all the water to disappear from Fang's canal, allowing the Druun to overrun the realm. The group then meets Tong, a fearsome warrior and the village's sole survivor, who hands over Spine's gem piece, allowing Sisu to control rain.

Raya, the strong and valiant warrior princess of Kumandra's Heart Land who has been training to become a Guardian of the Dragon Gem, is played by Kelly Marie Tran. She sets out to find the final dragon in order to bring peace to Kumandra.

Awkwafina as Sisu, the world's last dragon. Her demeanor is odd and insecure, yet she is also bold, compassionate, and intelligent.

Boun, a dynamic 10-year-old entrepreneur and proprietor of the "Shrimporium," a boat restaurant in the Tail Land, is played by Izaac Wang.

Namaari, the warrior princess of the Fang Land and Raya's adversary, is played by Gemma Chan. Namaari is played by Jona Xiao.

Tong, a fearsome yet kind-hearted warrior giant from the Spine Land, is played by Benedict Wong.

Little Noi, a baby con artist from the Talon Land, is played by Thalia Tran. 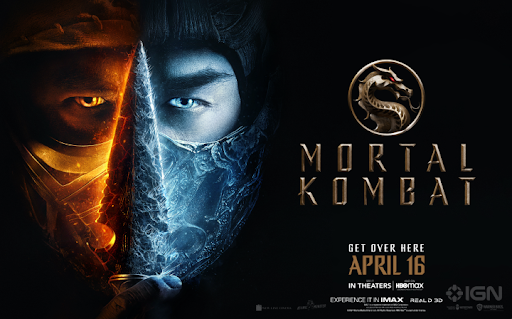 Mortal Kombat is an American martial arts fantasy film set in 2021, based on the same-named video game franchise. Lewis Tan, Jessica McNamee, Josh Lawson, Tadanobu Asano, Mehcad Brooks, Ludi Lin, Max Huang, Chin Han, Joe Taslim, and Hiroyuki Sanada are among the cast members of the film. Simon McQuoid (on his feature directorial debut) directs the film, which is based on a screenplay by Greg Russo and Dave Callaham and a screen scenario by Russo and Oren Uziel.

In late 2010, Warner Bros. Pictures and New Line Cinema began work on a new Mortal Kombat film. Kevin Tancharoen directed the film, which was based on a story by Uziel Uziel. In August 2015, James Wan was confirmed as a producer, and in November 2016, McQuoid was revealed as the director. Adelaide Studios in Adelaide and other sites in South Australia were used for filming.

Outworld has defeated Earthrealm in nine of ten tournaments known as "Mortal Kombat" The rules state that if Earth realm loses the tenth tournament, it will be conquered by Outworld. An ancient prophecy states that the "blood of Hanzo Hasashi" will unite a new generation of Earth's champions to prevent Outworld's victory. One such champion, Cole Young, is attacked alongside his family by Bi-Han, who now calls himself Sub-Zero. Jax Briggs rescues the Youngs, directing them to find his partner, Sonya Blade. However, he loses his arms in the process.

Cole follows Sonya to her hideaway, where she is questioning Kano, a captured Australian mercenary. She explains that she and Jax have been looking into Mortal Kombat's existence, and that anybody who kills the original bearer can get the dragon mark. Shang Tsung's assassin, Syzoth, attacks them, but Kano kills him with the assistance of Cole and Sonya. They visit Raiden's temple and meet Liu Kang and Kung Lao, current Earthrealm champions. While Sonya looks after Jax, Cole and Kano work with Kang and Lao to uncover their "arcana," a power that only dragon mark carriers possess.

Kano reawakens his arcana, which allows him to fire a laser from his right eye. Despite his efforts, Cole is unable to rouse his. Raiden returns him to his family while explaining that he is a Hasashi descendent. When Raiden reveals Cole's lineage before teleporting most of the Earthrealm warriors to the Void, Shang Tsung and Sub-Zero are furious.

Cole devises a strategy to drive Outworld's champions into a single battle with Earthrealm's before annihilating Sub-Zero all at once. Raiden hands Cole Hanzo's kunai, which still has his father's blood, and tells him that he may summon his spirit to fight with him if he uses it. Sonya kills Kano and gains his dragon mark, as well as the ability to shoot purple energy blasts as her own arcana, when beating Kano. Cole travels to Los Angeles in pursuit of Johnny Cage, a well-known Hollywood martial artist. 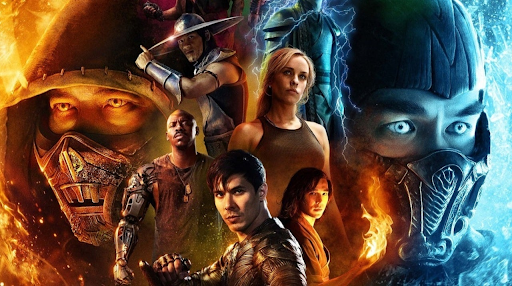 Joe Taslim, who played Bi-Han, the first Sub-Zero, was the first actor cast for the project in July 2019. Jax, Raiden, Mileena, and Liu Kang were cast in August by Mehcad Brooks, Tadanobu Asano, Sisi Stringer, and Ludi Lin, respectively. Josh Lawson, Jessica McNamee, Chin Han, and Hiroyuki Sanada were cast as Kano, Sonya Blade, Shang Tsung, and Scorpion, respectively, later that month, with Lewis Tan as Cole Young, a new character developed for the movie. Max Huang was cast as Kung Lao on September 16, 2019, according to Deadline. On November 11, 2019, stuntwoman Elissa Cadwell was named as Nitara's replacement. 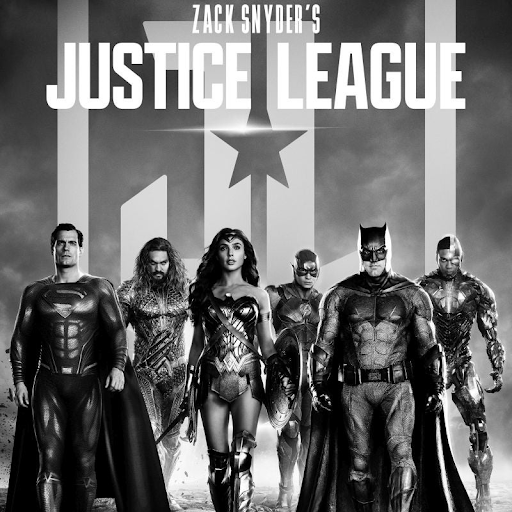 The "Snyder Cut" of Zack Snyder's Justice League is the 2021 director's cut of the 2017 American superhero blockbuster Justice League. It shows Justice League how director Zack Snyder envisioned it to be before stepping away from the project. It follows DC Comics' Justice League in their effort to save the planet from the cataclysmic danger posed by Darkseid and his army of Parademons, much as the theatrical version.The development of Justice League was challenging. Between 2016 and 2017, the script underwent significant revisions both before and during production. Joss Whedon was recruited to finish the picture in May 2017, and he did so as an uncredited director. The theatrical release of Justice League was met with mixed reviews and a box office flop. Warner Bros. is rethinking the DCEU's future, with less emphasis on a unified story.

Justice League suffered a difficult production. The script underwent major changes before and during production between 2016 and 2017. In May 2017, Joss Whedon was hired to finish the film, completing it as an uncredited director. The theatrical version of Justice League received mixed reviews and was a box office disappointment. Warner Bros. is reevaluating the DCEU's future, with less regard for a shared narrative.

On March 18, 2021, Zack Snyder's Justice League was released. The initial version of the picture, which cost about $70 million to make and was set to be released in February 2020, cost around $70 million to make. Fans and cast and crew members petitioned for an alternate edit that was more loyal to Snyder's vision. After receiving a lot of positive feedback from fans, Warner Bros. decided to go forward with it in February. 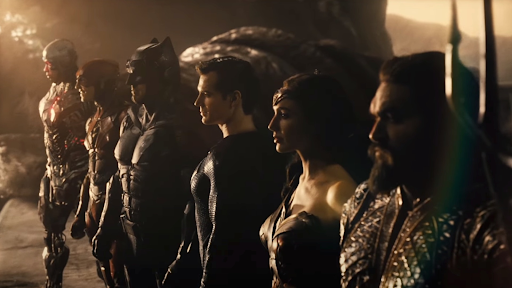 Darkseid and his legion of Parademons attempted to conquer Earth using the Mother Boxes. The attempt was foiled by a unified alliance of Old Gods, Amazons, Atlanteans, Men and a Green Lantern. In the present, Superman's death triggers the Boxes' reactivation, attracting Steppenwolf, Darkseid's disgraced lieutenant and uncle. He aims to gather the boxes to form "the Unity," which would terraform Earth in the likeness of their world Apokolips. Diana Prince and Bruce Wayne want to establish a metahuman squad to safeguard the planet.

When Steppenwolf returns from Themyscira with a Mother Box, Queen Hippolyta warns her daughter Diana Prince. When Arthur Curry's half-brother Orm refuses to take action, his tutor Vulko asks him to help Mera secure the outpost. Victor Stone joins when Parademons capture his father Silas and other S.T.A.R. Labs personnel in search of the humans' Mother Box. Gotham City Police Commissioner James Gordon provides information that leads the squad to Steppenwolf's troops at an abandoned base beneath Gotham Harbor.

Victor brings out the last Mother Box he had concealed for the group to examine. He reveals that the Boxes are "change machines" that carry out their master's wishes without fail, destroying or restoring life without prejudice. Barry and Victor exhume Superman's body and put it in the amniotic waters of a Kryptonian ship in S.T.A.R. Labs' genesis chamber. An amnesiac Superman is revived when Barry triggers the mother box, and he attacks the group mercilessly. Lois Lane, who had been visiting the Superman memorial, arrives just in time to calm Superman down, preventing him from killing Bruce.

Five heroes travel to an abandoned Russian city, where Steppenwolf aims to unite the Boxes. They plan to separate them by hitting them with a kinetic charge generated by Barry and Victor. The team fights their way through the Parademons while Barry runs to generate the charge. By the time Victor is ready, Barry is knocked down by a Parademon, allowing the boxes time to form the Unity, causing a massive explosion that wipes out the team. Bruce, Diana, and Alfred Pennyworth agree to set up a base of operations at the former Wayne Manor.

Jerry Siegel (Superman created by) and

Chris Terrio (story by) and

Will Beall (story by) 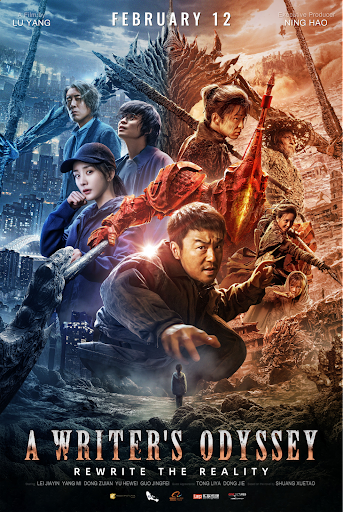 A Writer's Odyssey is a Chinese fantasy action-adventure film directed and written by Lu Yang, and produced by Ning Hao. It was released in 2021 in China.

The film is based on the same-named novel by Shuang Xuetao and its sequel, Godslayer.

Guan Ning's quest for his missing daughter, whom he suspects was abducted by traffickers, is depicted in the film.

In January 2021, a trailer for the film was published with English subtitles.

On Rotten Tomatoes, the film earned a 92 percent favorable review, with an average rating of 7.2/10. "Odyssey is packed with spectacular visuals, including a 50-foot, four-armed CGI adversary," Variety's Richard Kuipers observed, "but is let down by a narrative that fails to shape intriguing plot components into a consistently captivating whole." CBR.com's Narayan Liu gave the film a favorable review, complimenting the graphics but criticizing the characterisation.

Guan Ning's (Lei Jiayin) quest for his missing daughter, whom he suspects was abducted by traffickers, is depicted in the film. A big company ultimately contacts him and asks him to assassinate a teenage author whose fantasy work looks to be affecting their reality. A father goes on a bloody search for his kidnapped daughter. 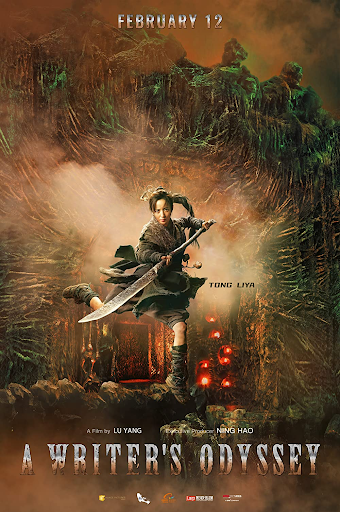