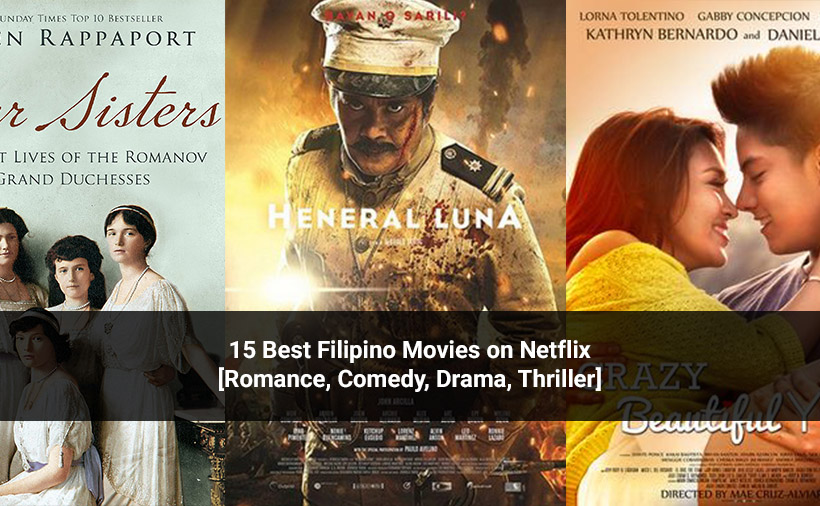 Netflix has become one of the popular binge-worthy OTT platforms Worldwide and not only this but also it has played a significant role in bringing Eastern Cinema to an international audience. In recent time, not only Indian Cinema but also the Eastern Cinema has performed really well on OTT platforms in terms of content & storyline. Be it Korean, Japanese or Filipino, people are drooling over the movies and web shows from these categories. So, if you are also looking for some fantastic Filipino movies to add in your watchlist, you must check out these 15 best Filipino Movies on Netflix from popular genres like Romance, Comedy, Action, Drama & Thriller. We are sure that you are definitely going to fall in love with each of them.

Overview: If you are a big fan of war movies and documentaries, then Heneral Luna is one of the best action-war Filipino movies on Netflix that you must watch. The movie highlights the war scene of 1898 and the resistance faced by General Antonio Luna from his own countrymen as he fights for his country’s freedom during the Philippine-American War.

Overview: A fantastic comedy-romance Filipino movie on Netflix to binge-watch in your free time. Gab, a perfect girlfriend, finally gets engaged to her long-time boyfriend, Jason. But her happiness turns into disappointment when she learns that she has accidentally married to a complete stranger, Dos. While trying to nullify her marriage with the stranger, will Gab fall in love with the stranger?

Overview: If you’re looking for some great comedy-drama movie to watch with your family, then Four Sisters and a wedding is the perfect choice for you. Four sisters reunite to stop their little brother’s wedding with a mean girl, and in doing so, all four of them comes closer and open their hearts out about the things they have kept buried for a long time.

Overview: A romantic teen drama that you can enjoy with your friends and lover. A nineteen-year-old rebellious girl Jackie with trouble soul is forced to tag with her mother on a medical mission. But on her way to medical mission, she finds a lively guy Kiko, and both discovers a special & beautiful bond between them.

Overview: A feel-good Filipino movie on Netflix to watch with your family. Highlighting the disintegration of an upper-middle-class, the movie revolves around a teenager Conrad who feels guilty for his older brother’s death due to a sailing accident. After spending some time in the psychiatric ward, he reconnects with his emotionally hurt mother and father with the help of his psychiatrist.

Overview: Two strangers running away from their grieving past memories, head to Barcelona for a fresh start. When both meet each other, they discover a special connection between them, but their bitter past memories come in between their path. How will these two trouble souls unite together? A perfect romantic drama movie on Netflix to add in your binge-watch list.

Overview: An inspiring family drama movie to enjoy with your family members. An imperfect family of a widowed father, left by his two sons, reunites when he is diagnosed with cancer. In the process of taking care of their father, the two brothers resolve their long-time harsh issues.

Overview: A rich and powerful businesswoman Vivian discovers that she has stage-3 cancer. While living the last moments of her life, all she wants is to reconnect with her son, who always feels neglected in his life. But when appoints a nurse named Angel, the things take a positive turn as Angel becomes the connecting bridge between Vivian and her son. A nice comedy-family drama Filipino movie on Netflix to enjoy with your family members.

Overview: An engaging mystery-thriller Filipino movie that you must watch. A Filipina farm girl, born and brought up in a reserved background by her father learns shooting by him. But one day she mistakenly shoots & kills an endangered Phillipean Eagle, after which some horrific events disturb her quiet life.

Overview: Dreaming about a fairytale wedding and actually having it are two different things, and nothing goes as planned. Popoy and Basha understand this thing after having a storybook wedding. But the realities hit them hard when they have to struggle to manage their marriage life and falling business together. Will both of them able to give a second chance to their love and dreams? A popular second edition of “First CXhance” Filipino movie on Netflix.

Overview: A nice thriller Filipino movie on Netflix for those who loves watching mysterious films and shows. Socially awkward guy partners with a group of misfit students to abduct a rich bully student, but their unprofessionalism turns this kidnapping mission into a deadly cause.

Overview: A cute love story that begins at the Rome Airport when a broken heart Mace struggles to adjust her personal belongings in luggage, so she doesn’t exceed the load and get help from a stranger named Anthony who offers her his free luggage space to keep her belongings. From there, the duo keeps their hearts open in front of each other and forms a special bond during their journey.

Overview: After being dead for two years because of her diabetes, Lisang overstayed in her purgatory room to trouble other souls for her entertainment. But the day arrives when she has to leave the room, and on the same day, the room gets leased by Hintayan- her ex-boyfriend. The movie received lots of popularity among critics for its storyline & concept.

Overview: A complicated romantic Filipino Movie on Netflix to binge-watch. An achievement-oriented guy Ethan starts falling for an old-soul girl named Audrey, who already is in relationship with Tristan- a guy in a coma. After meeting Ethan, Audrey starts falling in love with him and found herself in a dilemma where she has to choose between a man of her dreams and the man who can fulfil her dreams.

1. What Are Some Best Romance Filipino Movies On Netflix To Watch Online?

2. What Are Some Most-watched Filipino Movies On Netflix?

Filipino Movies have gained a lot of popularity globally on Netflix, and here are some most-watched Filipino movies that you must enjoy:

3. Is It Possible To Download Filipino Movies On Netflix App?

4. Is Filipino Movies Available On Netflix App Are Worth Watching?

Netflix has lots of great shows and movies to binge-watch in your free time, and Filipino movies belong to the same category. There are plenty of great Phillipean movies ranging from Comedy to romance, Thriller, and Drama are available on Netflix that are worth watching. We have shared some best worth0watching Filipino movies available on Netflix in the above article that you can refer to. Binge-Watch & Chill.

The links and information mentioned in the above article are legal and for entertainment purpose only. We don’t encourage any kind of piracy/pirated content and always advise our readers to purchase a legal subscription of entertainment apps/OTT platforms to watch their favourite shows and movies.