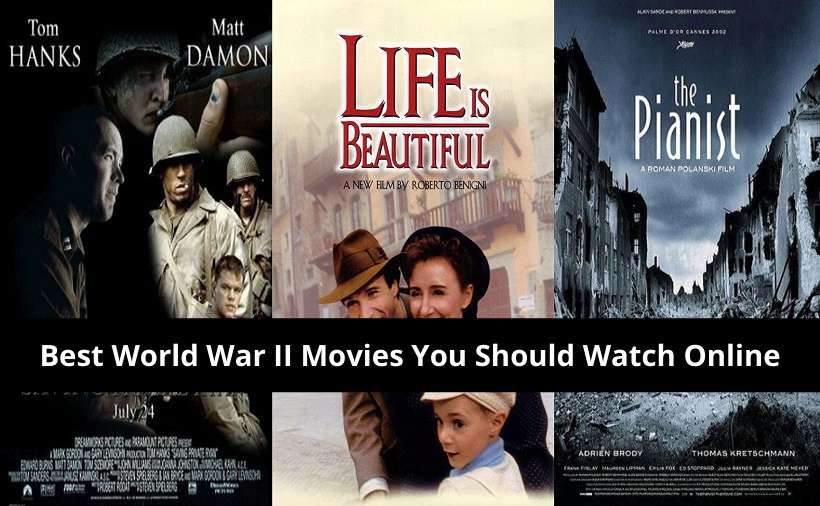 The era of World War II saw the rise and fall of heroes, love, ideologies and morales. It witnessed soldiers with battle-hardened hearts grieve, leaders rejoice, and people lose their close ones forever.

The movies based on World War II explore the emotions and struggles that the people went through. these world war II movies also introduce you to a whole new spectrum of human emotions along with the brutal realities of the Nazi reign.

Suggested: Best war based movies of all time you should watch now

Here’s a list of the 15 best World War ii movies that will take you to the back in the era. Don’t just read this article but you must also watch them in your free time.

Overview: This movie outlines the story of a businessman named Oscar Schindler (Played by Liam Neeson) who arrives in Krakow in 1939. With intentions to mint money from World War II, he joins the Nazi party to gain a political edge over others. He hires Jewish workers for his factory for expedient reasons. When the SS start to exterminate the Jews, Schindler comes up with a plan to protect his workers to keep his factory functioning. He soon realizes that in this process, he ends up saving innocent lives.

Overview: This movie is widely renowned for its realistic portrayal of the invasion of Normandy during World War II. It revolves around Captain John Miller (Role Played By Tom Hanks) who sets out with his men to search for Private James Ryan, whose three brothers were killed in the combat. Captain and his men begin on their journeys, amid brutalities and bloodshed. By the end, each man emerges victorious as they find out their unique strengths with bravery, honour, and respectability. Actors like Matt Damon, Edward Burns and Vin Diesel did justification to their roles.

Overview: The story is about how an Italian waiter called Guido crosses the path of Dora, a beautiful school teacher during World War II. Dora falls in love with him, all thanks to his charming personality and a great sense of humour. They soon get married and Dora gives birth to their beautiful son, called Giosue. Their life comes to halt when Dora is separated from her son and husband, as they get taken to the concentration camps. To guard his son against the horrors and brutal realities of war, Guido convinces him that their stay in the gas chambers is limited, and is only a part of a game.

Also check: Best prison movies on Netflix to watch in 2020

Overview: A Polish Jewish pianist named Wladyslaw Szpilman sees the eventual changes in Warsaw since the inception of World War II. During Operation Reinhard, he is made to part with his family after being compelled into the Warsaw Ghetto. The story proceeds as it shows how Szpilman hides to save his life through the ruins of Warsaw until the release of the prisoners from the concentration camps. The film is an adaptation of the famous autobiography of the book “The Pianist: The Extraordinary True Story of One Man’s Survival in Warsaw, 1939-1945.”

Overview: Trapped in the confines of a German submarine as it patrols the Atlantic Ocean, the crew goes through numerous conflicts due to long durations of isolation and weariness.

The crew must fight the daily obstacles to survive throughout the War. The good, old captain strives to keep the team’s sinking spirit up by motivating them amid ferocious storms, bloodshed, and waning resources. The War correspondent, Werner, keeps a tab on the daily proceedings on the U-Boat.

Overview: During the first year of German’s reign in France, lieutenant Aldo Rain (Played By Brad Pitt) gathers a team of Jewish men to rage against their nemesis, the Nazis. He gears them up to revolt against them violently, which also included the taking of their scalps. They soon join hands with the German actress and undercover agent, Bridget von Hammersmark, and conspire together to bring the doom upon the leaders of the Third Reich. Their destinies eventually align with Shoshanna Dreyfus, whose family was killed by the Nazis. She was a theatre owner, looking for ways to seek revenge from them. The film shows their journeys together, and how their fate ends up like. Most of the characters played by Christoph Waltz, Daniel, Michael Fassbender and Eli Roth elevated some scenes with their performance.

Check: Best Spy Movies on Netflix to watch in 2020

Overview: In 1942, Traudl Junge bagged the position of secretary to the infamous Adolf Hitler, whose power was at its peak. However, three years down the line, Hitler resorts to a bunker where he spends most of his life, as a result of his wrongdoings. The movie’s highlight is the narration done by the real-life Traudl, about Hitler’s last few days, when he sinks into delusion and fights his betrayers and howls orders to his armies who were merely imaginary. Eva Braun, his mistress, sympathizes with him in his misery, while the other Nazis prepare for their doom.

Overview: The movie revolves around the fearless adventurer, Indiana Jones, (Role Played By Harrison Ford) who embarks on a journey to rescue his father. His father was a medievalist who went missing while questing for the Holy Grail. Jones connects the dots by following the clues in his father’s notebook and soon finds himself in Venice. He seeks help from a gorgeous scholar but eventually finds out that they aren’t the only ones on their journey. They start to face ominous, old enemies whom they have to battle to reach the end of the trail.

Overview: Based on the real-life story of Pfc. Desmond T. Doss, who was famous for winning the Congressional Medal of Honor in World War II. He earned himself the medal without bearing arms during the war, on religious grounds. He was excluded from the community by the other soldiers for defying the norms and for his pacifist nature. He still managed to garner respect and acknowledgement for his courageousness, sense of sacrifice, and his compassionate nature. He managed to save 75 men in the Battle of Okinawa, without firing a single shot.

Only for you: best suspense movies you must watch on Netflix

Overview: Starring Benedict Cumberbatch, the film highlights the journey of Alan Turing (Benedict Cumberbatch) who was a Cambridge mathematics alumnus. A British Intelligence agency M16 hires Alan, to help decode Nazi codes, which also included Enigma, regarded as an ‘unbreakable code’ by cryptanalysts. Joan Clarke was also on Turing’s team, and they all join forces to crack the Enigma messages, while Alan assembles a decoding machine for the same. He and his team finally emerge victoriously and get hailed as heroes all over the world. However, in 1952, the authorities reveal the fact that Alan is gay, which makes him suffer through disgrace, and is sent to prison.

Overview: The long-buried, forgotten letters found on the island shed light on the stories of the Japanese troops who breathed their last breath fighting in World War II. Some of them were Baron Nishi who was an Olympic champion, Saigo who was an ordinary baker, and Shizimu, a soldier who lived by the idealistic notions of war. The lieutenant, Gen Tadamichi knew that he and his men had no chances of making it through. Still, he devises extraordinary tactics to fight the American troops. The movie is about giving your best, even when you know it might not bear fruit.

Overview: Rachel Rosenthal experiences a narrow save from the clutches of death, and goes on to become a part of the Jewish resistance. She takes up the name, ‘Elles de Vries.’ Her headmen give her the order to seduce Ludwig, a Gestapo officer. Although she successfully manages to do so, she eventually finds herself falling in love with him.

Overview: A runaway fugitive of the US Army, Private Witt is shown to be living an ordinary, happy life with the localities of the South Pacific island. His commanding officer soon finds out about his whereabouts and forces him to come back to the army and resume his training for the Battle of Guadalcanal. Witt and his team land on the island, where the American troops declare war by assaulting the established Japanese positions. The movie shows the fate each character is met with, and how they react to do or die situations.

Overview: A political officer decides to make his friend, a young Russian sharpshooter, Vassili, the star of his campaign. As the story progresses, both of them fall in love with the same woman, who was a soldier. It puts their friendship at stake. Vassili faces the ultimate challenge when the Nazis command its most able marksman, to hunt down and execute him. The story shows the series of events that follow soon after amidst the raging battle.

Overview: When the Allies were making their ultimate push into the European theatre in 1945, a cold, disciplined Army sergeant called Don “Wardaddy” Collier took up a death-dealing mission. He leads a Sherman tank and a troop of five men. They eventually find themselves in a helpless, hopeless situation with dwindling ammunition and outnumbered soldiers. Stuck with an inexperienced soldier (played by Logan Lerman), they still move forward fighting all odds to take down the Nazis. Roles played by Shia LaBeouf and Jon Bernthal as soldiers did a marvellous job to steady the plot of the movie.

Recommended: Best inspiring movies of all time based on true stories

1. What Are Some Of The Best World War Ii Films Out There?

On Platforms like Netflix, Hulu, Prime you can find a wide range of world war ii war movies from old to the latest ones to watch online or download within the website/app. Some of the best world war 2 movies are:

2. Do OTT Platforms Have World War 2 Based Movies Category?

On the Internet, many of the OTT Platforms have plenty of world war 2 movies available from comedy-war, romance-war, war-drama, war-thriller, and war-action genres to watch online.

3. How To Find World War II Movies To Watch On OTT Platforms?

4. Is It Possible To Download World War 2 Based Movies Online?

5. Can We Watch These World War II Movies Online For Free?

6. How Many World War II Movies Are Available On Netflix?

Netflix has plenty of World War II Based movies available on it. It has some 20-60 best world war II films that you can enjoy anytime online.

If there’s one aspect the film industry has been ceaselessly creative with, it’s World War II movies. The above-mentioned list will have you welling up at heart-wrenching romances, and rejoicing with hard-attained victories. Get your binge-watching mode on, sit back and hold your breath while these movies take you for a ride!

Here at Bingepost, We never assist or promote any kind of piracy content or torrent websites here. We are just giving you the official and legal links to watch them on OTT platforms. Piracy of any authentic content material is a punishable crime and we completely oppose this piracy. The content material that’s given above is simply to provide the wanted details about unlawful actions. Its objective shouldn’t be at any time and in any solution to assist in piracy and morally unsuitable acts. So, we request our readers to please steer clear of such web sites and decide the precise manner or authorized websites for downloading any movies online.