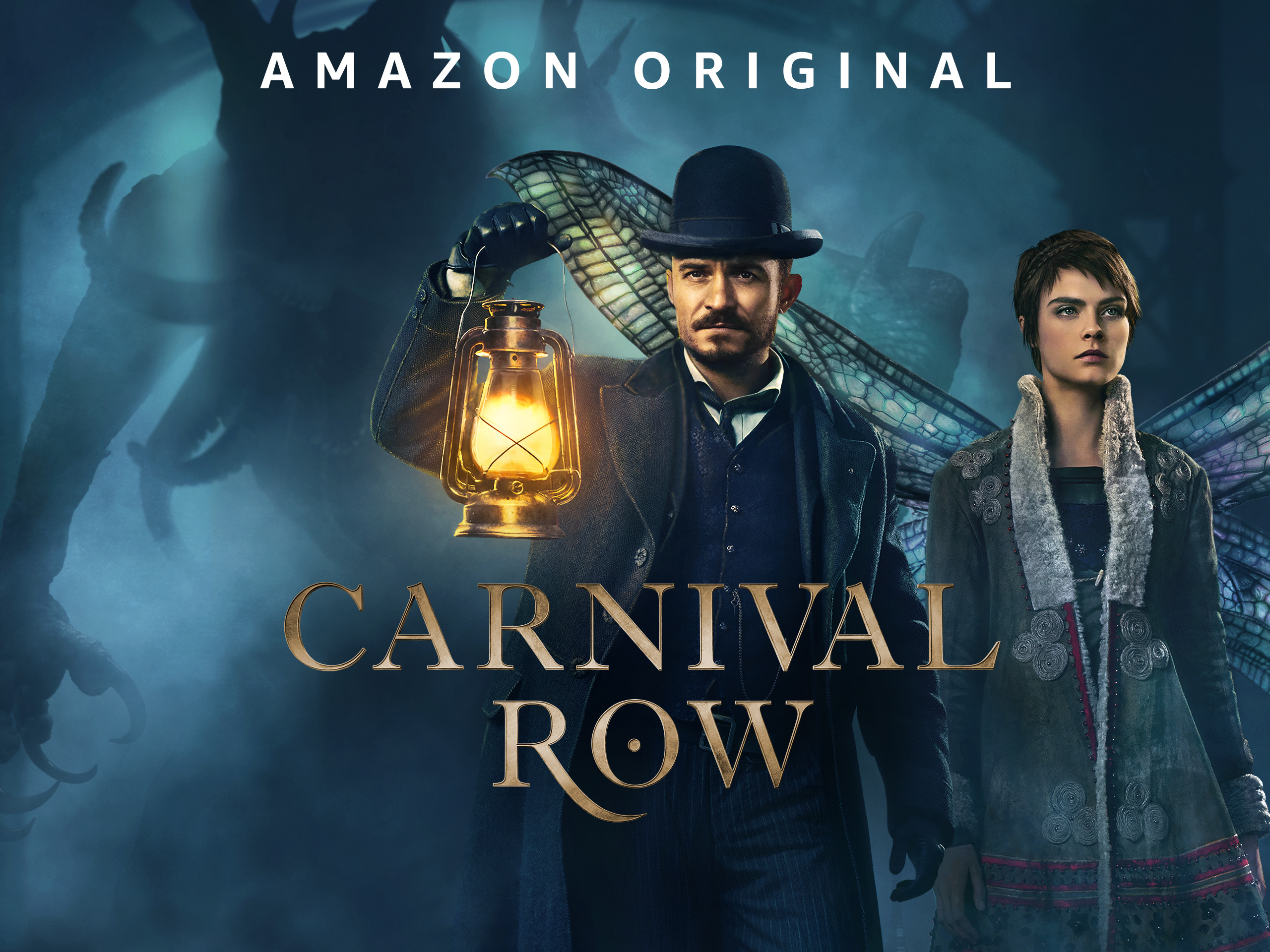 Carnival Row, an adaptation from a film script called A Killing on Carnival Row, written by Travis Beachem, premiered on Amazon Prime in 2019, brings viewers to a dark, Victorian-style dystopian society destroyed by war and ethnic hatred, it wasn’t the colour of people’s skin that mattered, but rather their species. Starring Orlando Bloom and Cara Delevingne. As fairies and other mythical creatures whose prosperous homelands were conquered by human civilizations, made up the refugees who were undesired in their new human home.

This burgeoning immigrant community struggles to survive with humans in the city's most impoverished neighborhood, where they are banned to dwell, love, or fly freely. Despite an increasingly hostile society, hope lingers on when a human investigator, Rycroft Philostrate, and a refugee faerie named Vignette Stonemoss renew a hazardous romance. Vignette has a secret that puts Philo's reputation in jeopardy during his most critical case yet: a spate of brutal murders that threatens the Row's fragile tranquility. 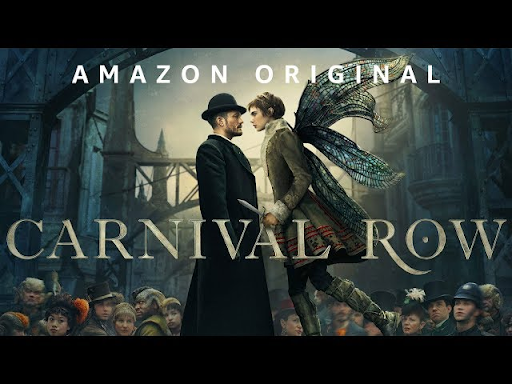 Pixies, fauns, dark magic, and monsters abound in a Victorian world that seems as distant from life in 2019 as imaginable. Despite this, the first season of Carnival Row was relentless in reminding us of some of the most pressing problems of today. Instead of avoiding being too current or merely dealing with general issues about the essence of life, the series aggressively challenged us to consider how we treat migrants and how society may lose its moral compass when it succumbs to fear. But that didn't stop the show from providing a getaway from our troubles. It accomplished so only because of its classic and captivating love storyline. 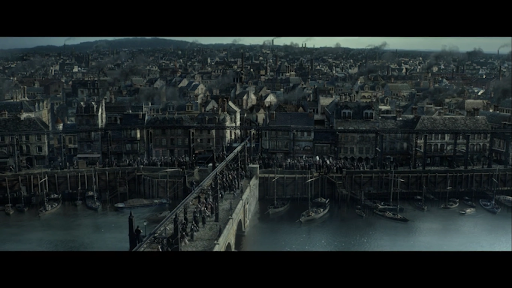 Citizens of a war-torn country were forced to abandon their homes by an oppressive imperialist ruler at the start of the season. It all came to a head when a supposedly "moral" country imprisoned those same persecuted migrants in a detention camp. While watching these events develop, it was difficult not to think of the atrocities that follow every everyday report. It felt all too real for Jonah to acquire political power by manipulating the fear of "others." "Restore The Burgue's Greatness" by informing his people that strange-looking individuals from over the border are the root of all their troubles. Then hope they overlook the nation's elite's riches and apathy, which are the actual causes. A metaphor for contemporary racial and immigration conflicts The nonhuman species serves as an all-purpose emblem of oppression, having been turned into refugees by human conflicts and imprisoned in ship holds to be sold into indentured slavery. 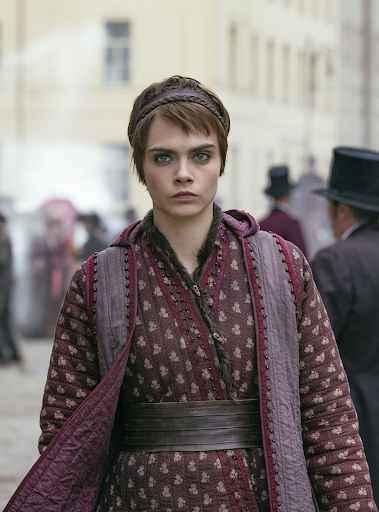 Vignette is a fae (fairy, or "Pix" in the show's universe) who is fleeing her past life as a librarian-turned-smuggler and seeks to make a new life in the Burgue, one of the major human districts, after a battle tore her own nation apart. Vignette is smart, clever, and determined to figure out what occurred when she discovers that her old boyfriend, policeman Philo (Orlando Bloom), is alive and well in this side of the world. 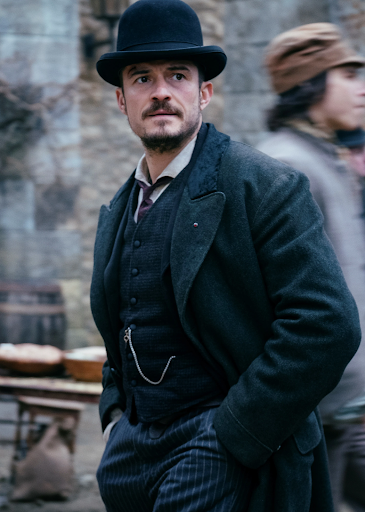 Inspector Rycroft Philostrate of The Burgue is devoted to the pursuit of justice. He despises the maltreatment of the fae on Carnival Row, and despite the restrictions of a society plagued by racism, Philo has made it his particular goal to guarantee that everyone is treated fairly. He is the lead investigator in the Carnival Row murders.

The Spurnroses(Andrew Gower And Tazmin Merchant) 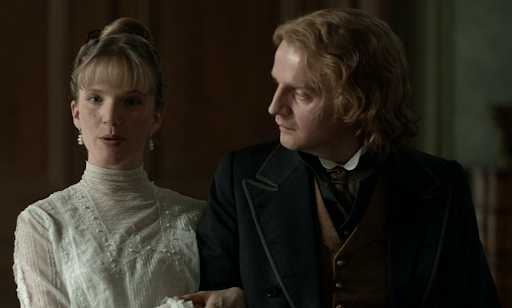 Ezra Spurnrose (Andrew Gower) is a young aristocratic heir who is mismanaging his late father's money, jeopardizing his and his sister Imogen's social standing. As the owner of the ship Deliverance, which he purchased in the hopes of profiting from the Fae who pay to flee their ravaged homelands, he hires survivor Vignette as a servant for Imogen (Tazmin Merchant), who shares her brothers' contempt for others and is particularly bothered by their new faun neighbor. They're two of the more easy-to-hate individuals on Carnival Row, being selfish and prejudiced. 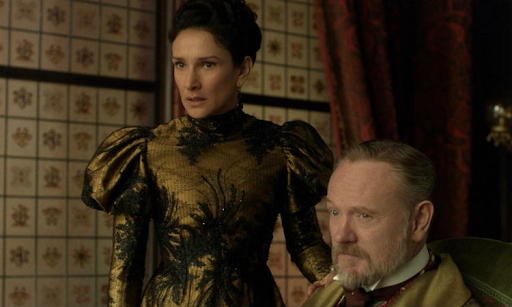 Absalom Breakspear (Jared Harris), the Chancellor of Burgue, is a man entangled in the web of Burgeon politics and the Fae immigration problem. He is regularly questioned by his more conservative and anti-magic colleagues, while being a liberal. He is snippy with his wife Piety ( Indira Varma), who is pulling a lot of the strings behind the scenes–and is faced with an unwanted controversy when his son, Jonah (Arty Froushan), is abducted and held for ransom after a drunken affair on Carnival Row. 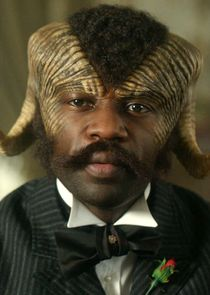 Agreus Astrayon is a newcomer to Imogen and Ezra's long-time neighborhood, and he is not welcome. No other fairy has ever had the audacity to live among humans. Agreus, on the other hand, is a master at code-switching, unlike the other fae. He knows how to blend in with others.

The Wolf's Curse, which effectively turns humans into werewolves, and the strange creature known as a Darkasher, which is produced from the corpses of other animals, are two more notable magical entities they encounter. It's also indicated that the Fae utilize magic in ordinary ways on a regular basis. Perhaps this explains some of the interesting anachronisms in “Carnival Row's” Victorian setting, such as the elevated trains that pass through the Burgue.

Some Dark God Wakes (Episode 1) - Philo looks into an unknown attacker who has a vendetta against the fairies; Imogen meets her new neighbor; Vignette comes to The Burgue seeking for a fresh start. The debate over the critch is heating up in Parliament.

Aisling( Episode 2) - Philo is called in to examine the death of a strange fairy. Vignette is introduced to a new set of faeries by Tourmaline. Imogen makes an attempt to get Agreus removed from the area. Jonah Breakspear vanishes.

Kingdoms of the Moon (Episode 3) - Philo was once entrusted with guarding a faerish mimasery as a Burguish soldier. Philo meets Vignette and finds love in the most improbable of settings while The Pact bears down on them.

The Joining of Unlike Things( Episode 4) - Philo looks into the assassination of his childhood headmaster. Vignette becomes friends with the Black Raven. Imogen devises a strategy to assist her brother. With Longerbane, Breakspear launches an attack.

Grieve No More (Episode 5) - Philo contacts a Haruspex in order to learn more about the murderer; Vignette develops a stronger bond with her newfound family. Imogen draws Agreus into her circle, and a new player makes an impact in Parliament.

Unaccompanied Fae (Episode 6) - Philo is starting to fit things together. Vignette finds herself in an unexpected spot. Jonah slips away to see someone he shouldn't be seeing. Imogen makes a gamble that will cost her a lot.

The World to Come (Episode 7) - Philo is arrested and imprisoned. He gets some unexpected aid from Vignette there. Ezra, on the other hand, is not fond of Imogen's new lifestyle. Sophie makes a bargain with Jonah.

The Gloaming (Episode 8) - Philo must fight both darkness incarnate and the evil that commands it as tensions escalate on Carnival Row. The Burgue's real nature is revealed in Vignette. Imogen makes a decision she will not be able to reverse. Breakspear's secrets are discovered.

Carnival Row has a 56 percent approval rating on Rotten Tomatoes, based on 68 reviews. "Beautiful, but bloated, Carnival Row boasts meticulously crafted mythology and lush world building—unfortunately, its narrative of haves and have nots just has too much going on to produce anything cohesive," says the website's critical consensus. Meanwhile, 87 percent of viewers have given it a positive rating. The series has a weighted average score of 58 out of 100 on Metacritic, which indicates "mixed or average reviews" based on 22 reviewers. The average user score is 7.8 out of ten.

When Will There Be A Season 2? 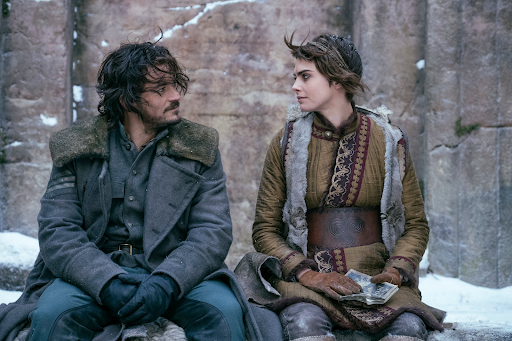 Carnival Row Season 2 has been renewed by Amazon Prime Video. Season 1 of Carnival Row wowed the audiences. The performance was favorably received by both fans and reviewers. Despite the fact that it has been renewed for a second season, we can expect it to air in the fourth quarter of 2021. Season 2 shooting was believed to have begun in 2019. It was, however, placed on hold owing to the epidemic. Filming is believed to have restarted in 2020. According to certain reports, the filming will be completed in August 2020. When shooting was suspended owing to the pandemic, the creation cast was supposedly three weeks away from completing up filming for the season. But nothing is set in stone just yet.

Season 2 will include the same cast as Season 1, with the following actors reprising their roles: Rycroft ‘Philo’ Philostrate is played by Orlando Bloom, Vignette Stonemoss is played by Cara Delevigne, Runyon Milworthy is played by Simon McBurney, Imogen Spurnrose is played by Tamzin Merchant, Agreus Astrayon is played by David Gyasi, Tourmaline Larou played by Karla Crome, Jonah Breakspear played by Arty Froushan, and Sophie Longerbane played by Caroline Ford.

However, there have been some changes behind the scenes, according to Deadline, season one showrunner Marc Guggenheim departing the show to focus on other projects he is already working on. Erik Oleson will take over as showrunner, bringing his expertise from the third season of the Netflix series Daredevil with him.