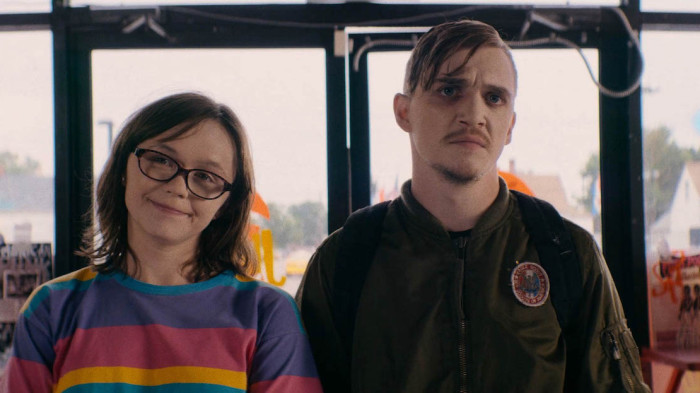 You will find pieces of”Repo Man,””Napoleon Dynamite” and other literally or simply philosophically”punk rock” cult comedies at the DNA of all Adam Carter Rehmeier’s rude yet ingratiating “Dinner in America” — and mercifully none whatsoever here of his 2011 first feature “The Bunny Game,” a shrilly monotonous “extreme” horror for which all is now forgiven. This rambunctious mix of anarchic humor and misfit romance is not always inspired in the writing department, but its uneven qualities are mostly steamrolled over by the infectiously high-energy execution.

Best of all, it’s got a knockout lead performance by Kyle Gallner (soon to headline CBS All Access series “Interrogation”), who turns an admittedly showy role into something quite likely to become the favorite movie character ever for a small but fervent minority. As the saying goes, a star is born. Though unlikely to risk a major commercial breakout, there are enough other assets in this playfully surreal “Dinner” to attract niche distributors in various formats.

We first meet Gallner’s Simon as he’s about to get chucked from a paid drug-research study he’s enrolled in for a little extra cash. Suffering the same fate is newly-met Beth (Hannah Marks), who casually invites him over for dinner and possible sexual favors at home, where her family appears to have stepped out of Jules Feiffer’s “Little Murders.” But dinner and the other stuff are swiftly canceled after Beth’s mom (a frisky Lea Thompson) gets a little too interested in their guest, whose spectacular exit adds to the many reasons he’s already wanted by local police.

Musician Simon is also a drug dealer as well as drug enthusiast, which is presumably the main cause of his cop following. When the fuzz nearly have him cornered, he’s saved by semi-accidental intervention from pet store worker Patty (Emily Skeggs), a young woman who’s awkward in so many ways that she spends much of her time being called a “retard.” She, too, invites him home — unfazed by his vaguely Hitleresque mohawk, among other red flags — where her family also turns out to be completely mental. Nonetheless, Simon urgently needs a hideout, so this suburban Detroit split-level will do. Still, he nearly bails upon realizing that Patty is an obsessive fan of his alter ego, John Q. Public, the masked and anonymous lead singer of punk quartet PYSOPS.

At first glance, Simon is just a walking snarl, forever picking fights over nothing, however hopeless he is in an actual punchup. Yet under oddball Patty’s roof, other sides emerge: He can be droll, imaginative, a consummate liar, even altruistic in his own bemused way. Fooling her family into taking him in as an alleged son of missionaries, he both provokes them and improves their lot, if only by introducing several desperately uptight personalities to the unwinding power of weed. He also gets Patty to stand up for herself, or at least let him stand up for her, in the face of various bullies.

Gellner makes Simon so charismatically cool we can shrug off the fact that the script include some homophobic slurs amid his colorfully profane language. (Such jibes seem somehow beneath him.) He tosses off lines with the kind of insouciant bravado that makes them seem instantly repeatable, though on the page few might seem special. He also lends sufficient conviction to the unlikely chemistry with Patty, who’s ably played by Skeggs (from Broadway’s “Fun Home”), but is a more patly familiar conceit of caricatured geek-girldom — complete with de rigeur “Look, she’s pretty now that she believes in herself!” transformation toward the end.

Its various amiable plot complications leading to a concert/police-raid climax, followed by some amusing epilogue material, “Dinner” isn’t masterfully constructed or even wildly original. But it has a bright comic look and energy to it, with every design contribution from Jean-Philippe Bernier’s widescreen lensing to John Swihart’s thumping electro-trash score upping the viewer’s happy-pill dosage. And beyond finding a godsend in Gellner, Rehmeier gets good mileage from nearly the entire supporting cast. They grasp the slightly warped humor he’s aiming for here, hitting a suitable range of comedic notes from the deadpan to the broadly farcical.