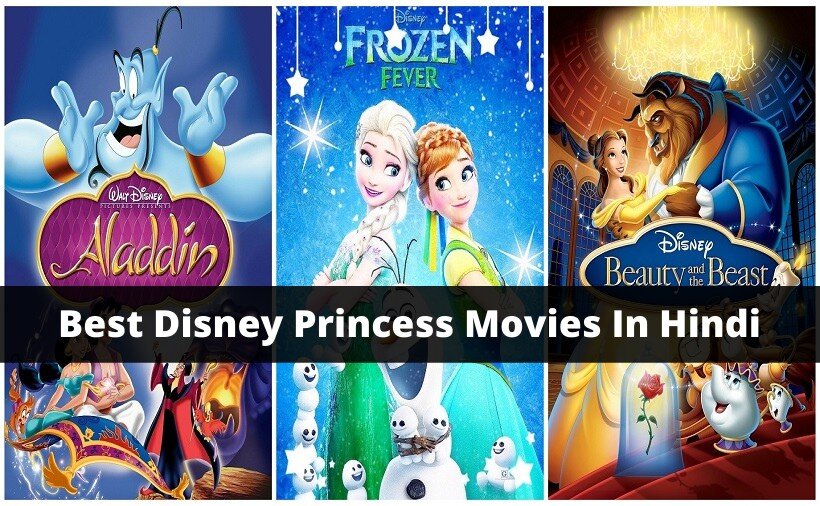 Over the years Disney has offered us many Princess movies to watch. Most of us have grown watching the stories of Cinderella, Snow White, and others. Disney has a long line-up of Princess Movies and more new names like Moana and Frozen and being added to the list.

As kids, we all loved to watch Disney Princess movies. Many of these movies have been re-made by Disney or they have released a live adaption movie. But all of these movies are made in English. This can be a problem for small kids as many of them are not well-versed in English. They may not be able to understand the language while watching the movies. This is why we need Disney princess movies dubbed in Hindi.

Also read: What Disney Princess are you currently?

List Of Best Disney Princess Movies In The Hindi

Overview: Beauty and the Beast is one of the most successful Disney princess movies ever made. This is the story of beautiful Belle and a prince who is trapped inside a beast’s body because of a curse put on him. This movie has received the highest IMDb score.

There’s no other Disney Princess movie that could beat its record to date. Disney also launched a live-action adaptation of the movie in 2017. The huge success of the movie which collected more than $1 billion may have convinced the makers to design these robots. The movie is available on Amazon Prime Videos and Disney+ Hotstar.

Overview: Although the name of the movie is based on the name of the lead male character, that doesn’t mean that Jasmine is any less important. She is one of the most popular Disney princesses. The movie has scored 8.0 on IMDb which makes it yet another highest rated movie.

In 2019, Disney launched a live-action adaptation of Aladdin. In this, Jasmine had an even bigger role to play than what she had in the animated movie. The movie is currently available on Amazon Prime Videos & Disney+ Hotstar.

It has received a score of 7.7 which is more than a lot of other Disney movies. The story of Rapunzel has resonated well with viewers. The movie is available on Amazon Prime Videos and Disney+ Hotstar.

Overview: We have watched The Little Mermaid cartoons by Disney. But later they came up with stunning animation and released the movie. This is the story of the mermaid named Ariel and her life under the sea. The excellent animation and catchy soundtrack make this the perfect fairy tale for any little girl.

The movie quickly captured the hearts of the audience as soon as it was released. It has a 7.6 score on IMDb which is good. Currently, Disney is preparing a live-action adaptation of the movie that will feature Halle Bailey as Ariel. The movie is available on Disney+ Hostar and amazon prime.

Overview: There is hardly anyone who doesn’t know the story of Snow White and Seven Dwarfs. Her charm is admired by everyone in the kingdom except her stepmother, the jealous Queen. But out of jealousy, the Queen traps her in the evil magic that sent her to a deep sleep which can be broken only with the kiss of her true love.

The movie has won the hearts of millions of viewers worldwide. Not just that, but it has also received really good ratings on IMDb. The movie is currently available on Disney+ Hotstar and youtube.

Overview: Moana is one of the newest additions made in the Disney princess list of movies. Although it’s a new story, the animated movie has done well. The audience has accepted the movie. It has received a score of 7.6 scores on IMDb.

However, there is a lot of debate regarding whether Moana should be considered a princess or not. Just so you know she is a part of the Disney Princess family. Currently, This movie is available to stream on Netflix and Disney+ Hotstar Apps.

Overview: The story of Cinderella and her glass slipper is perhaps the most famous Princess story ever. Ask anyone and they all know the story. Taking advantage of the popularity of Cinderella, Disney made the first animated Cinderella movie which won millions of hearts. The movie was loved by everyone.

Currently, the movie has a 7.3 score on IMDb. In 2015, Disney decided to make a live adaptation movie of Cinderella. However, it received a lesser score than the original Cinderella movie by Disney. currently, This movie is available to stream on Disney+ Hotstar and youtube.

Related news: Disney is promoting Cinderella motivated desserts which are appropriate for a princess

Overview: Frozen is a new addition to the Disney princess franchise. This 3D animation movie was such a big hit that the makers were convinced to come up with a second part.

The movie was not only entertaining for kids, but it was even loved by adults. Frozen is the story of Queen Elsa who has got the power of ice and her sister Anna. We recommended you to watch this movie without missing. The movie is currently available to watch on Netflix and Disney+ Hotstar.

Overview: The Princess and the Frog is yet another popular Princess story from Disney. The movie was released back in 2009, but it is still enjoyed by kids. With this movie, Disney introduced an African-American princess to its Princess franchise. This is one of the main reasons why the movie did so well.

The movie received a lot of appreciation because people were happy to see a Princess of colour instead of a typical white Princess like in every movie. The movie has got a 7.1 score on IMDb. The movie is available to watch on Disney+ Hotstar and Netflix.

Overview: Pocahontas was released at a time when Disney was going through its Renaissance period. This Disney princess movie is the perfect combination of great animation and music. The film is based on an important Native-American figure.

However, the movie didn’t receive high ratings like the other Disney princess movies. It got a score below 7 on IMDb which is very low. but it is worth watching now online. The movie is currently available on Disneyplus.com

Overview: Brave is the story of a tough Princess who is strong and needs no saving. With this new princess in the line-up, Pixar and Disney wanted to change the image of a typical princess that they have always portrayed. No doubt, the idea behind the movie was great, but it failed to resonate with the audience.

It didn’t do that well as the other movies. It got a 7.1 score on IMDb, which is lower than many other movies in the Disney Princess franchise. The movie is available to watch online on Amazon Prime Videos & Disney+ Hotstar.

Also check: The best reality TV shows on Disney+ to watch as a family

1. Where Can I Watch Best Disney Pictures In The Hindi Language?

You can watch all of the Disney Princess pictures in one of the leading OTT platform which is Disney+ Hotstar. these top animated movies are available in both English and Hindi language to watch in India. just search for the movie name you want to watch on either google or directly in the Hotstar platform and you will get the content you want.

2. What Are The Top Disney Princess Movies Based On Ratings?

3. Can I Watch Best Disney Princess Movies For Free Online?

All of the Disney Princess Movies In Hindi listed in this article are only available to watch on their respective OTT platform Hotstar. if you want to watch any Princess movie online then you must take paid subscription of Disney+ Hotstar service. Always legally watch movies to support the original content creators & avoid piracy.

Yes, These movies are definitely worth watching if you want to get some pure entertainment. Even though these are just animation movies, the kind of plot and graphics used to produce such movies will give you a super experience in the real world. Such movies are always made with some entertaining and romantic dramas behind them. They comically portray the real-life. so you can watch them without any worries.

So these are some of the greatest & best Disney Princess movies that are dubbed in the Hindi language. You can stream these movies on their respective platform i.e, Disney+ Hotstar and watch them in your regional language. Since the movies are dubbed in Hindi, it becomes easier to understand for the Indian audience.

We don’t assist or promote any kind of piracy stuff or torrent websites here. Piracy of any authentic content material below Indian legislation is a punishable crime and we oppose this piracy. We are just providing legal information that is available on the internet. The content material that’s given above is simply to provide the wanted details about unlawful actions. We have only provided the official, legal links to watch movies on their respective OTT platforms. Its objective shouldn’t be at any time and in any solution to assist in piracy and morally unsuitable acts. So, we request our readers to please steer clear of such web sites and decide the precise manner or authorized websites to access movies online.