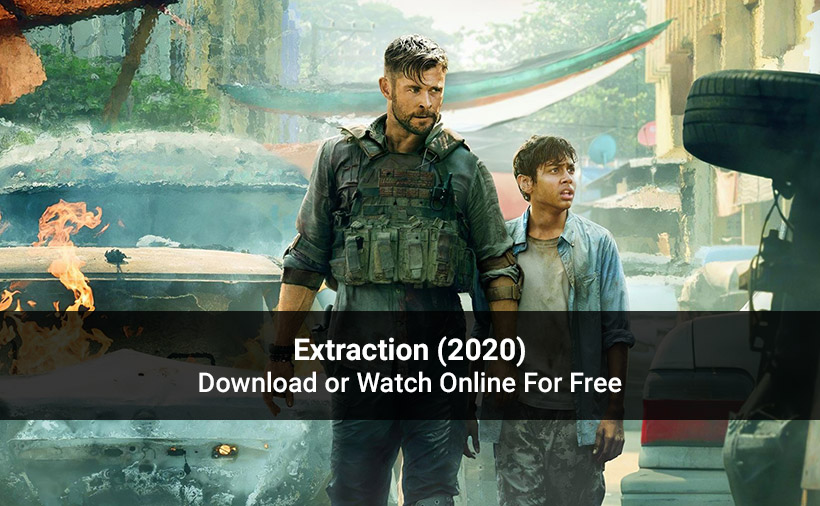 After producing so many memorable Marvel movies, Russo Brothers, along with Sam Hargrave (Stunt Coordinator in several marvel movies), come up with their new creation Extraction on Netflix. Starring industry’s big faces like Chris Hemsworth, Pankaj Tripathi, and Randeep Hooda, Extraction is an action thriller film. Shot in Dhaka, Bangladesh, Extraction full movie revolves around a mercenary who is on a mission to rescue India’s druglord’s son from his rival, who kidnapped him. Unaware of the danger involved in this mission, the mercenary deals with corrupted military officers, dreadful fights, and a deadly situation. Amid burning cars, bullets, and druglord’s goons, how will this mercenary rescue that child, is this movie all about.

Extraction is recently aired on Netflix, and if you haven’t watched it yet, here is its detailed review for you. Along with Cast and plot details, we will also share Extraction movie download and streaming availability details for you. So, what are you waiting for? 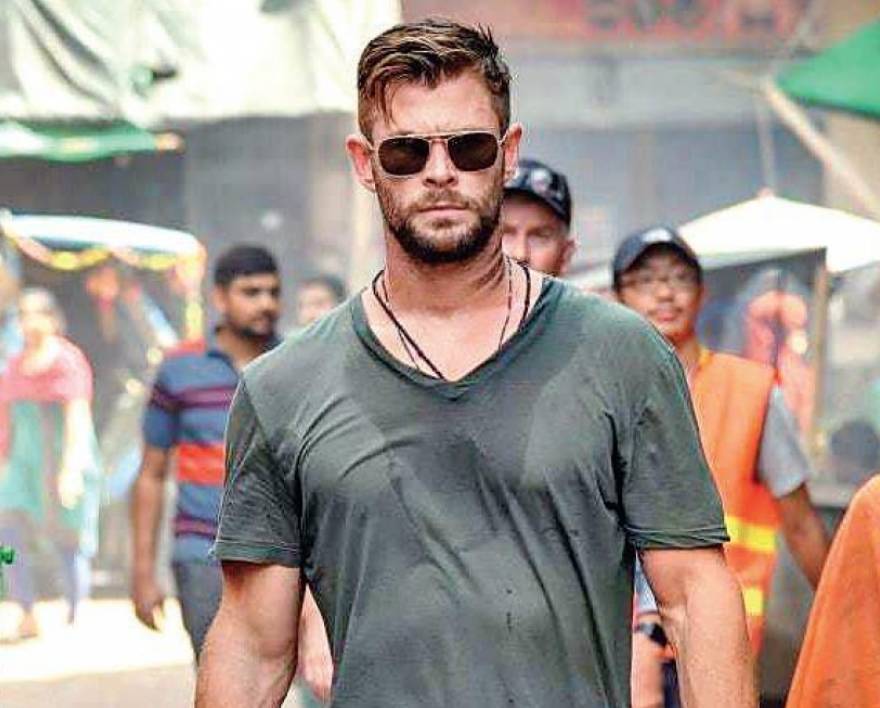 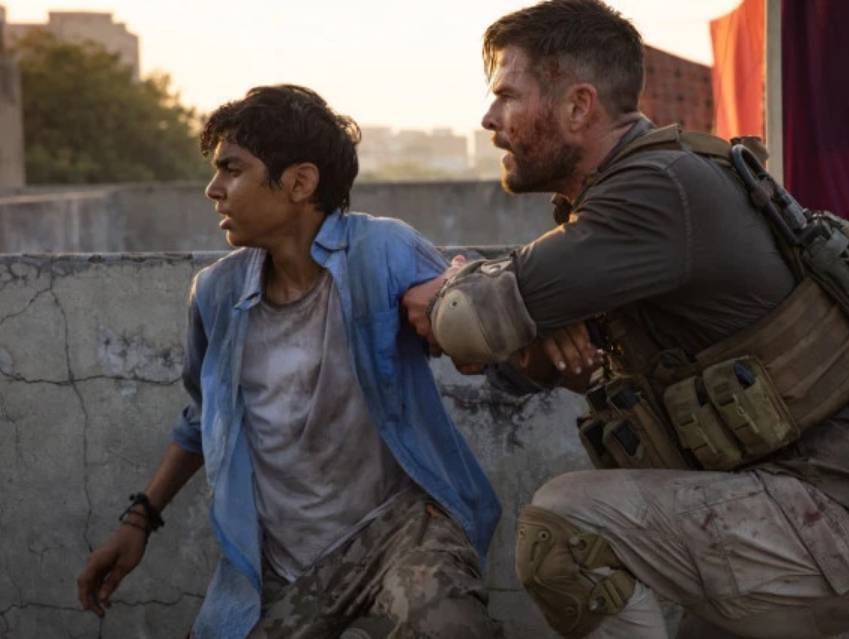 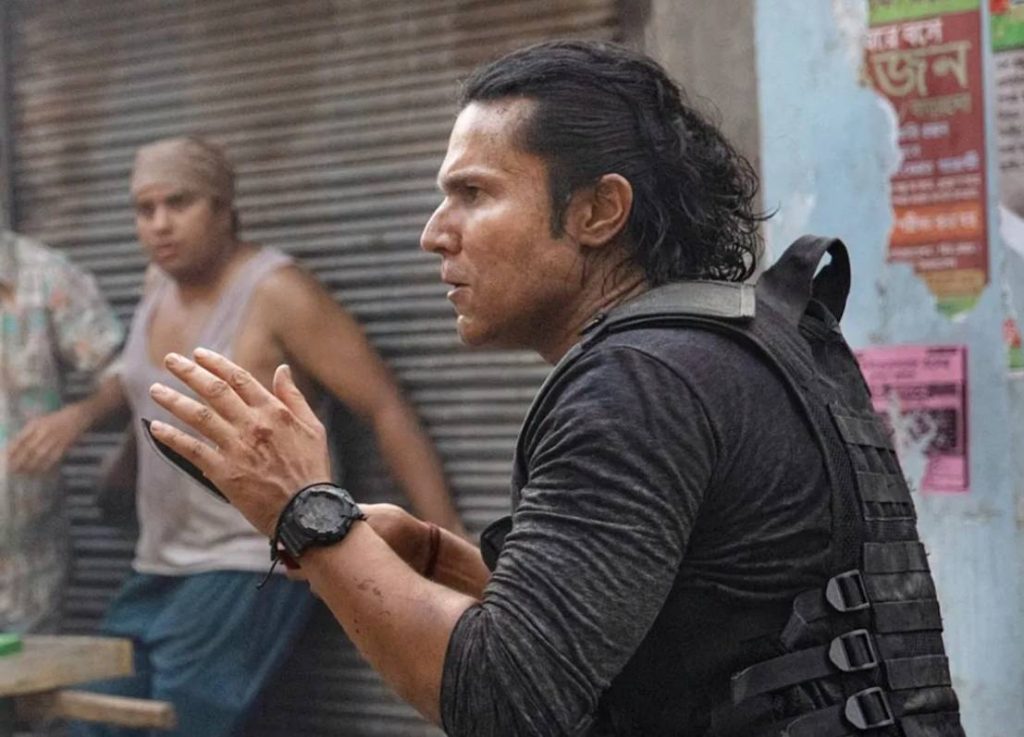 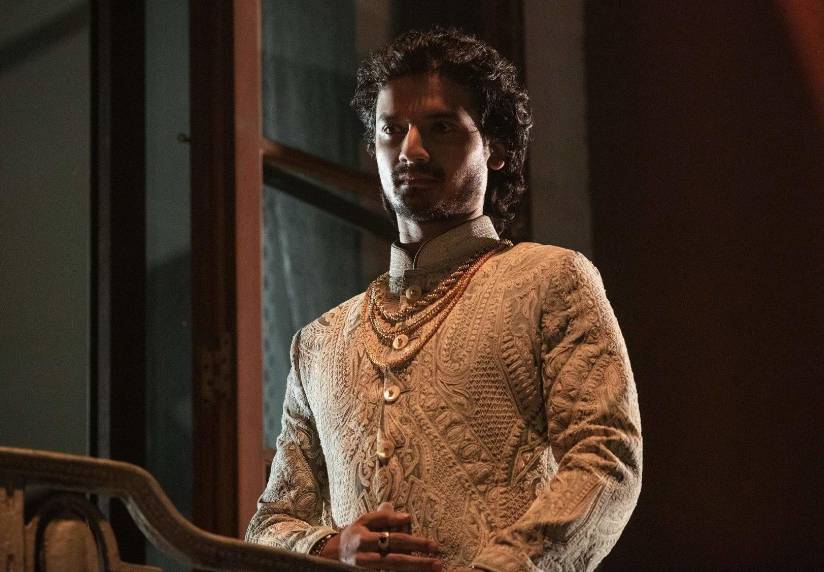 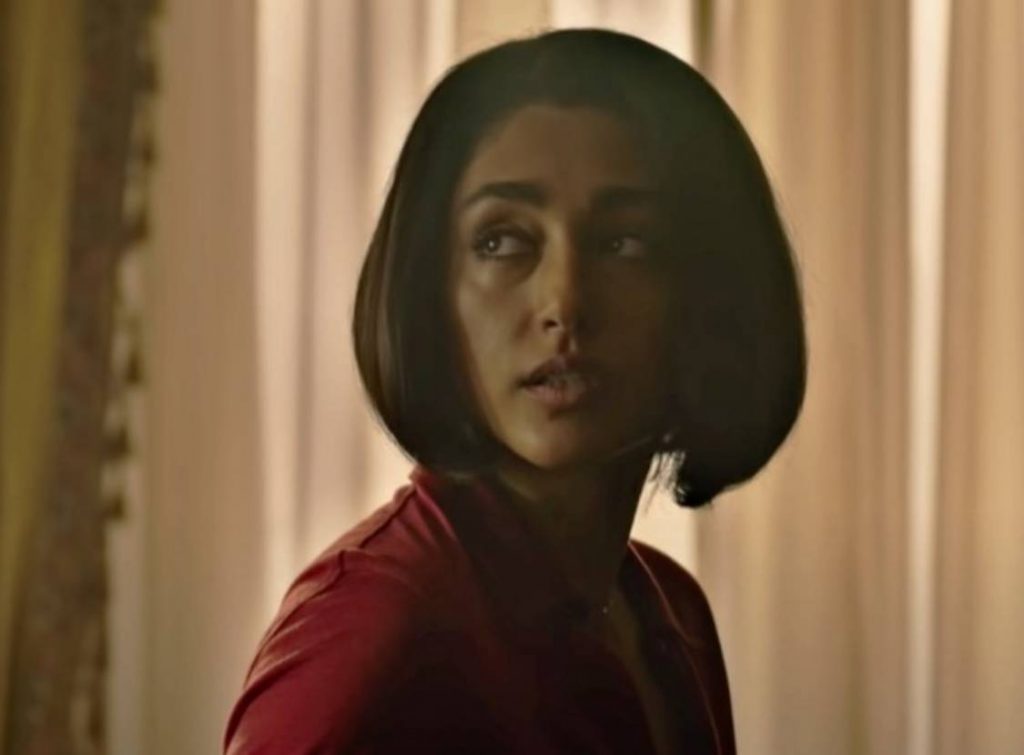 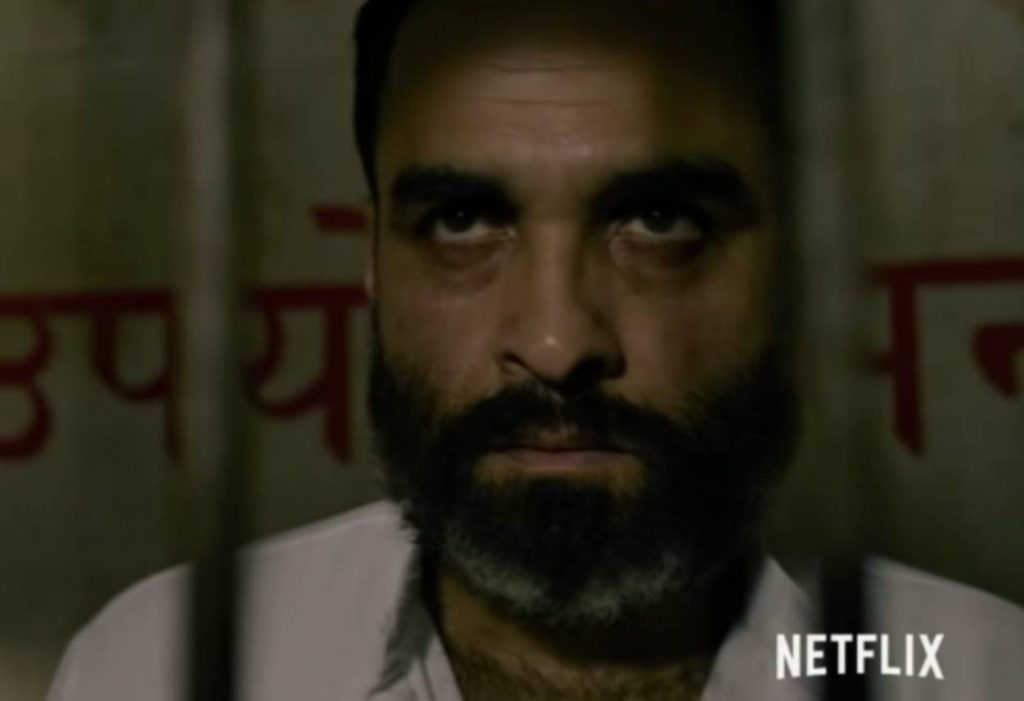 Extraction is based on a mission: To find the son of Indian Crimelord Ovi Sr. who is kidnapped by his rival and Bangladeshi Crime Lord Amir, rescue him and safely escort him back to India. For this mission, Ovi Sr. (Pankaj Tripathi) hires Tyler Rake- a black market mercenary. Tyler, who had a haunted past and is a kind of damaged personality, opt this mission for self-redemption. But he was unaware of the fact that Ovi Sr. doesn’t have money to pay him, and that is why his henchman- Saju is also sent by Ovi Sr. on this mission to kill Tyler Rake once he rescues Ovi Jr. safely. On the other hand, Amir is a powerful crimelord in Bangladesh and control all the corrupted military force under his power. When Tyler, along with his partner Nik reaches Dhaka to rescue Ovi, learns that it is a deadly mission as the whole military is after him, and it seems impossible to save Ovi. One side there are Amir’s men, and the other side is Saju, both want to kill Tyler Rake.

With so many men against him, Tyler redoubles his efforts to rescue Ovi Junior and kills many people in this process. Ovi Jr., who is not happy with his father’s profession, forms a special bond with Tyler Rake and shares his experiences with him. Damaged Tyler also feels the same and shares his traumatic past with Ovi Jr. and how he lost his six-year-old child, suffering from the disease. Since the death of his child, Tyler blames himself for his wrong choices and have no motive to live his life. But after meeting Ovi, his perspective changes, and he tells Tyler that he should forget about his sufferings and move on.

After rescuing Ovi somehow, Tyler encounters Saju, who tries to kill him. Both Ovi and Tyler manage to escape from there, but a young boy Farhad who wants to prove himself to Amir attacks them. After a brutal fight, Farhad fails to kill them, and Tyler’s old friend Gasper offers shelter to Tyler and Ovi. Gasper works for Amir and tries to convince Tyler that he should not go against Amir. Rake fights with him, but suddenly Ovi comes and kills Gasper by shooting him twice.

Ovi feels like Tyler can be a good guardian, and he feels safe with him. After killing Gasper, Tyler unwantedly seeks help from Saju to escort Ovi safely back to India, as the whole military force of Amir won’t let him do this alone.

As Saju’s ultimate motive is to bring back Ovi Jr. safely to India, he agrees to help Tyler. Rake tries to distract the force while Ovi and Saju move towards a bridge checkpoint. Rake tries to make his way towards bridge checkpoint, but Amir’s men arrive there while Amir witnesses the whole battle by standing afar. Nik and the team pick Ovi up, and Tyler, along with Saju, fights off with a horde of Amir’s men. The more they kill, the more killers come in their way. Finally, Colonel Shadek (top Sniper in the industry and works for Amir), appears at the scene to kill Ovi, Rake, and Saju.

Saju, who is already injured by fighting with Amir’s men, try to stand one last time to fight off but shot straight by Shadek. Tyler, anyhow, keeps fighting with the force and gets severely injured. Nik and Ovi move forward on the bridge while Tyler keeps fighting to continue the Extraction. Tyler instructs Ovi to get into the helicopter approaches them, and just when Tyler was about to approach the helicopter, he is shot by Farhad in the neck. Tyler drags himself to the side of the bridge and falls in the bridge as self-redemption. Ovi is shocked by watching Tyler fall off the bridge, but Nik’s team takes him back to India safely.

After eight months, Nik kills Amir in the washroom to revenge Tyler’s attack. Ovi jumps in the school’s swimming pool, and when he comes up from the water, he saw a blurred figure, seems like Tyler is watching him from a distance. 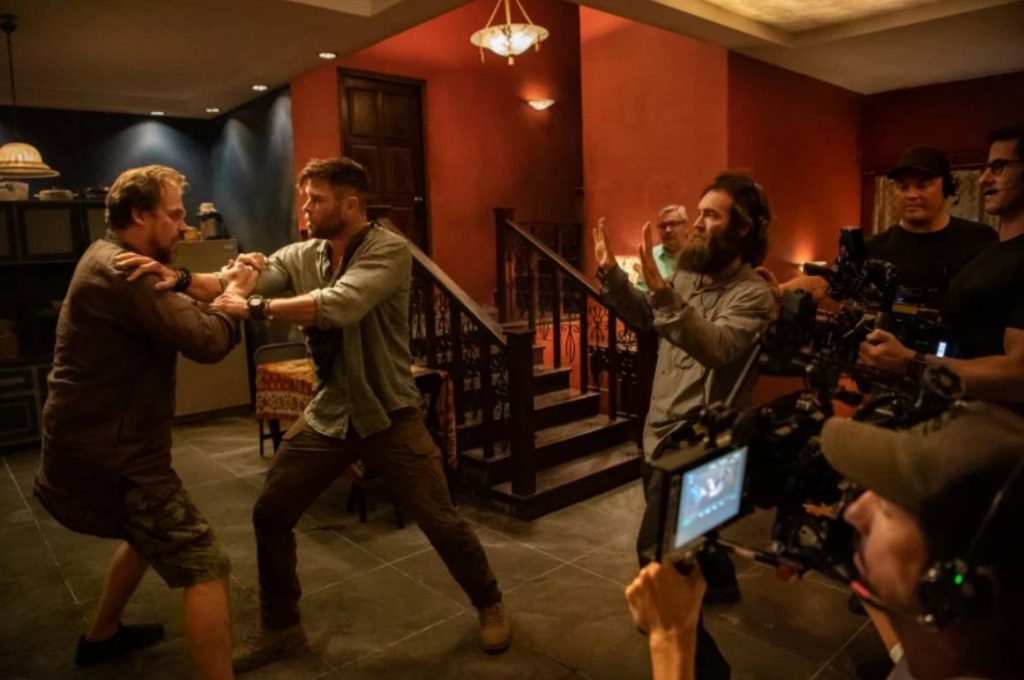 With the ambiguous ending of Extraction, many people are curious to know whether Tyler survived that attack and meets Ovi (as the last scene of the movie depicts) or it was just Ovi’s imagination as he loves Tyler a lot and not ready to believe the fact that he is dead. When the same question has been asked to Director Sam Hargrave, he said that the movie was tested with lots of people. Some wanted including himself & Russo Brothers, that Tyler should be dead in the end as he was living a miserable life, and his self-redemption is over, so there is nothing left for him.

But the rest of the audience who loves Chris a lot don’t want to see him dead in the end and hoping that they might come back after surviving the attack as now he has Ovi in his life. To make everyone happy, and keep the option open for the sequel of the movie, makers decide to give an ambiguous ending to the movie so the audience can predict whatever they want to. If they want to believe that Tyler is dead, then they can think about it, and if they want to believe that Tyler is alive and will come back soon, then they can consider it.

Step 1) Head over to the Netflix app. If you don’t have on your device, download from the official website.

Step 2) Install and open the app. Go to the register/login page and enter your credentials.

Step 3) Once logged in, you can see an Extraction movie poster with details on the homepage as it’s a new release. Tap on it.

Step 4) Now you can see more details about Extraction movie download, watch the trailer, etc. You can start watching it online or tap on the download button for offline watch.

1. Where Can I Watch Extraction Movie Online?

Netflix’s original, Extraction movie is recently released on Netflix App. To watch Extractaction movie online, you have to download the Netflix app, sign in with your details, purchase its subscription, and binge-watch the movie.

As per the Ending of Extraction full movie, it can be predicted that its sequel might come in the future, as Tyler might survive the attack and comes back to live his new life with Ovi. Makers haven’t confirmed anything about its sequel yet, but we will keep you updated once we will get any further information about it.

If you are a fan of Chris Hemsworth and love watching action-thriller movies, then Extraction is a must watch the movie for you. With little empathy, the movie majorly focusses on the brutal fight between rival crimelord and mercenary. Chris’s charm is at the peak in this movie with some good actors like Randeep Hooda, Rudraksha, and Pankaj Tripathi. So, yes, Extraction is worth watching. Extraction movie download and streaming is available on the Netflix app.

As a responsible entity of the country, we do not support or promote Extraction movie download from via torrent. Extraction full movie review and scene details mentioned above are written just to provide our readers with information about the movie. We advise our visitors to avoid piracy content providing sites for Extraction movie download or streaming purpose. The content is entirely created for educational purposes.