Fairy Tail Filler List: All Episodes You Can Skip to Watch Now In 2020 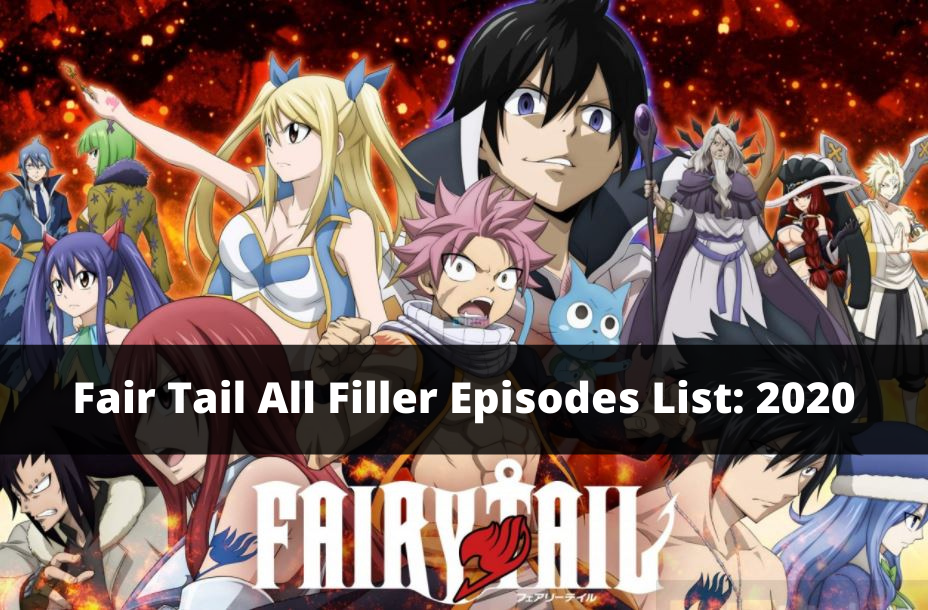 Fairy Tail is one of the most renowned anime series that was aired first in 2009 and managed to run over a decade, till 2019. It basically consists of the story of a mystical guild called Fairy Tail, that welcomes the main character, a runaway celestial wizard Lucy.

From here on, the guild goes through adventures and battles to save people in need, fight off criminals and also the evil incarnates fo Zeref. The series has around 328 episodes, out of which around 63 fairy tail episodes to ignore watching which have been reported to be fillers.

Even though the filler content in Fairy Tail is comparatively low, of only around 19%, a Fairy Tail filler list would sure help to skip those instead. Thus, we have prepared a full-fledged Fairy Tail fillers that have all the episodes reported as fillers. You can safely skip them and watch the others instead, to stick to the main plot. Have a look!

Hiro Mashima is hailed all over the world for his manga collection of fairy tail timeline. the one he wrote that managed to garner immense popularity worldwide Fairy Tail. Fairy Tale is a manga that was written back in 2009, and the same year was it adapted into an anime series which set the anime industry in a storm. Much like the tv show Friends of Hollywood, Fairy Tail is a must-watch for every otaku, ever.

Fairy Tail is the story of a notorious magical guild, that consists of different individuals who have superhuman powers. Their job is to go around different villages, or whenever duty calls, and protect the humans and other people from the mortal enemies.

Throughout the series, the guild and its members come across good as well as evil. The only difference between them both being that most of the evils trying to destroy the guild can be traced back to one person the immortal Dragon Slayer Zeref.

The setting of Fairy Tail anime is in Fiore. Fiore is a whole other word, a fantasy-word where magic is as common as land is to humans. It is full of histories, legends, mythical creatures and mystical practises that’s otherwise not practised in the human world. The whole basis of this enigmatic world is magic, and Fairy Tail isn’t the only guild.

There are other guilds and groups too, who practice similar powers to achieve a set of goals and objectives as their main day to day job. And among all, Fairy Tail is the most premium guild, standing out for its togetherness, core beliefs and promising members.

And then, the audience is introduced to the main character the heart of the show Lucy Hearfillia. Lucy is a wizard, or rather, a runaway celestial wizard who was on the lookout for her celestial gate keys. To achieve the same, she seeks the Fairy Tail guild out, hoping to get into it and become a member hoping that they take her in somehow.

On her way to do so, she encounters a series of events and one of them was her meeting the Dragon Slayer, Natsu Dragneel. Natsu is probably the strongest of all in the Fairy Tail guild and was hailed by everyone for his Dragon Slayer abilities. Natsu saves Lucy’s life when she was about to get kidnapped, by a man who used to identify himself as the Salamander.

Upon entering the guild, she gets an extremely warm welcome from other members too – much to her surprises, She and Natsu get close to Erza, the armoured wizard who had the capabilities to change her armours according to the battle and the situation and also Gray Fullbuster, who had the powers of ice and was also known as the Ice Wizard.

There is, of course, also Happy, who was more like Natsu’s adorable side-kick, who resembles a cat or a Neko. All of them together go on to form their own little group within Fairy Tail.

The group gets assigned many tasks throughout the series. Some of them are to tackle and handle criminals, helping people in need, and most of all fighting the members and defeating the Etherious guild, one that was the brainchild of the dark, evil lord the Dragon Slayer Zeref.

In a sudden encounter, the fairy tail filler arcs guild members happen to meet the evil lord Zeref, on the grounds of Sirius Island. Now, Sirius Island happens to be the place held sacred by the members of the Fairy Tail guild, and thus, a war ensues between the two.

They wage war against the Dark Guild of Grimoire Heart, who were planning to break the seal and release Zeref so that he can dominate the world and become the supreme ruler. The battle draws the attention of another evil entity, also known as the Dragon Acnologia. Dragon Acnologia proceeds to use armed forces and other means of warfare and ammunition to blow the Fairy Tail guild up.

They were almost on the verge of losing but somehow survive the attack with the help of their founder, Mavis Vermillion. Mavis cast a defensive spell where he halted the opponent in suspended animation, to buy the guild members some time to fight back after planning a scheme.

The wizards come back after years and enrol their names in the Grand Magic Games or the Daimatoenbu. The tournament is basically held to determine which guild is the strongest, and the winner gets to have superior rights which are worth fawning over.

Latest: Boruto filler list: all episodes you can skip to watch in 2020

When Fairy Tail participates in the tournament, they unknowingly manage to halt a time travel scheme, oblivious of the fact that they even did it. The time travel scheme was devised by a companion of Rogue Cheney, who also happens to be a Dragon Slayer. The whole point of the plan was to bring about Dragons who could terrify the people living in society.

The evil lord, the Dragon Slayer Zeref gets angered by this whole debacle and decides that it’s time for him to eradicate every ounce of humanity’s existence. Thus, he releases and assigns his guild Etherious’ strongest fighter, Tartaros to do so. A rampant war between the Fairy Tail members and Tartaros now ensues.

The dark entity whom we mentioned above, Acnologia, sees this fiasco as a golden opportunity for him to exterminate both guilds. However, Igneel, who was sealed in the Dragon Slayer Natsu gets released and a fight ensues between him and Acnologia.

Natsu was always on the lookout for his father, who turned out to be Igneel and more surprisingly, it is revealed that he was inside Natsu all along. However, during the war, Igneel loses and dies, shattering Natsu to pieces as he later retreats to some faraway land to train to become stronger.

After a year, Natsu returns and meets his master, Makarov Dreyer. Dreyer was the strongest of all in the continent, and his skillset was unparalleled compared to all other wizards. The way he meets Dreyer was also quite an interesting encounter.

He met him through a battle, which took place to defeat and thus prevent the Alvarez Empire from invading the land. Alvarez Empire was a military nation which was led by Emperor Spriggan and also happened to be the alternative identity of Zeref.

This calls for a battle, a showdown between Zeref’s army and Natsu in the end. And a shocking revelation happens through which Natsu gets to know that he is, in fact, Zeref’s younger brother. His name is Etherious Natsu Dragneel, and Zeref created Natsu to as an avatar of his magic.

After getting to know all of this, Natsu gets even more enraged and prepares to finish Zeref off for once and for all. However, as he was Zeref’s magical incarnate, according to the law if Zeref dies, Natsu would have to die too.

Natsu couldn’t care less and decides to kill him come what may, but he gets interrupted by Happy who promises him to find another way to do it and begs him to live, even if it means keeping Zeref alive.

How Many Episodes Of Fairy Tail Are There?

Fairytail has a total of 328 episodes telecasted combining all seasons.

If magical guilds, fantasy thriller, romance and friendships are what drives you to watch anime, Fairy Tail is it. It literally tops almost every top manga lists, and rightfully so. It teaches you the essence of friendships, loyalty towards one’s guild, the right use of powers and combating your own insecurities and becoming a better you.

And it only ended last year, so you can catch up on it still! However, do refer to our Fairy Tail filler list while watching it. It has the episodes that have been reported as filler, which you can safely skip instead and watch the main plot.

As Fairy Tail is a huge anime in itself, with around 328 episodes, cutting down on the fillers can save you a lot of time especially when you can’t wait to complete it. Save them for some other day, when you’re at leisure and want to have a good time. Other than that, Happy Binging!

The information provided here about anime filler list fairy tail is only meant for educational purposes. We do not intend to promote online websites that are using pirated content to stream fairy tail anime filler list. Our objective is to inform and bestow people with basic knowledge. we have only provided the links of the websites for fairy tail television show.

Accessing the fairytail filler list in pirated form is against the law, and this article is not meant to advocate or encourage it. Piracy is an online offence and can steep fines or imprisonment. We don’t claim any content that is shared on this page as ours. we are just providing the information that you need.