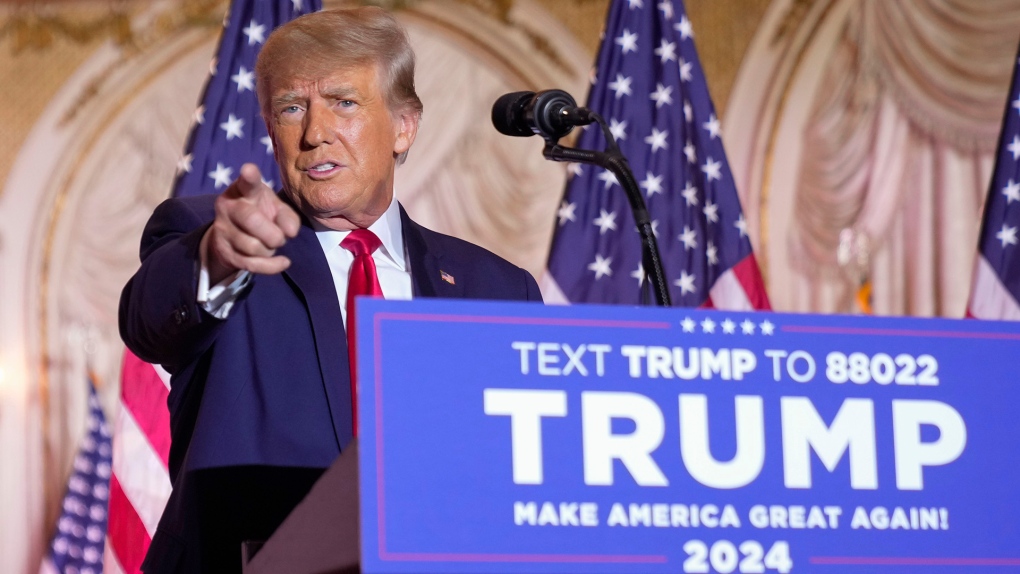 Former President Donald Trump announces a presidential bid for 2024 on Tuesday night. He hopes to run for the Republican presidential nomination in 2024 and become just the second commander-in-chief to be elected to two non-consecutive terms.

Trump addressed a throng assembled at Mar-a-Lago, his seaside resort in Florida, where his campaign will be based.

In order to make America great and glorious again, I am tonight announcing my candidacy for president of the United States.

Trump gave a very understated speech while surrounded by supporters, advisers, and influential conservatives. The speech was full of untrue and inflated statements about his four years in power.

I am running because I believe the world has not yet seen the true glory of what this nation can be. We will again put America first.

Trump attempted to arouse nostalgia for his time in office despite a historically polarizing presidency and his own role in inciting an attack on the US Capitol on January 6, 2021.

He did this by frequently drawing comparisons between his first-term accomplishments and the Biden administration's policies and the current economic situation. Many of those perceived successes, such as the stringent immigration policies, business tax cuts, and religious freedom programs, continue to this day to be extremely divisive.

Trump asserted that the party cannot afford to choose "a politician or conventional candidate" if it hopes to retake the White House as he addressed a roomful of Republicans who anticipate he will face primary opponents in the upcoming months.

Trump declared, "this will not be my campaign, this will be our campaign all together."

Trump's much-anticipated campaign comes as he attempts to retake the spotlight following the GOP's lackluster midterm election showing, which included the losses of numerous Trump-endorsed election skeptics, and the attendant blame game that has developed since Election Day.

With only 215 races called in their favor so far out of the 218 needed, Republicans have failed to win a Senate majority, fallen short in their attempts to fill several statewide seats, and have yet to win a majority in the House. These outcomes have put Trump and other party leaders on the defensive as they deal with criticism from within their ranks.

Just before making his announcement at Mar-a-Lago, Trump filed the necessary paperwork with the Federal Election Committee to officially declare his candidacy.

He only spent a small portion of his speech reiterating his lies about the 2020 race, much to the pleasure of advisers and allies who have long counseled him to wage a forward-looking campaign.

Despite calling for paper ballots and comparing the U.S. electoral process to that of "third world countries," Trump occasionally tried to enlarge the scope of his complaints, bemoaning the "massive corruption" and "entrenched interests" that, in his opinion, have overtaken Washington.

Trump's closest aides are worried that his obsession with spreading theories about the 2016 election would make it more difficult for him to win a national election in 2024.

Trump made it abundantly apparent throughout the hour-long address that he wants Republicans to view his campaign as a self-sacrificing endeavor.

The legal and emotional toll his administration and post-presidential time have placed on his family members was described by him at one point. "Anyone who truly seeks to take on this rigged and corrupt system will be faced with a storm of fire that only a few could understand," he added.

Trump has come under fire following last week's midterm elections for boosting unqualified candidates who spent too much time repeating his allegations of election fraud, alienating crucial voters and eventually causing their defeats.

On Tuesday, he made an effort to refute that allegation by highlighting at least one Trump-backed candidate, Kevin Kiley of California, and emphasizing that Republicans seem certain to regain control of the House.

Trump at one point seemed to attribute his party's midterm defeat to people not yet understanding "the total effect of the suffering" brought on by the previous two years of Democratic rule in Washington.

"I have no doubt that by 2024, it will sadly be much worse and they will see clearly what has happened and is happening to our country – and the voting will be much different," Trump stated.

The first state-level elections are more than a year away, so there is a long way to go before the Republican presidential contender is formally chosen in the summer of 2024 in the US. The rising star Florida Governor Ron DeSantis, 44, and Trump's former vice president Mike Pence, 63, are two prospective rivals for the party's nomination in 2024, and some think Trump's unusually early launch may be intended to stave them off.

According to Republican Party strategist Adolfo Franco, "he’s getting ahead of other Republicans. Being Donald Trump, he would frame any other candidate who were to launch a presidential bid henceforth as disloyal to him as being the former president and in a sense the titular head of the party."

Trump, who was twice impeached while serving as president, however, joins the campaign at a time when he is politically exposed.

He had intended to begin his campaign in the wake of huge Republican gains in the midterm elections, which were fueled by candidates he supported during this year's primaries. Instead, many of those candidates came up short, giving the Senate to the Democrats and giving the Republicans a slim chance of winning the House of Representatives.

Because of the defeats, some well-known Republicans have publicly accused Trump of endangering their party's chances of seizing control of Congress by endorsing unqualified candidates.