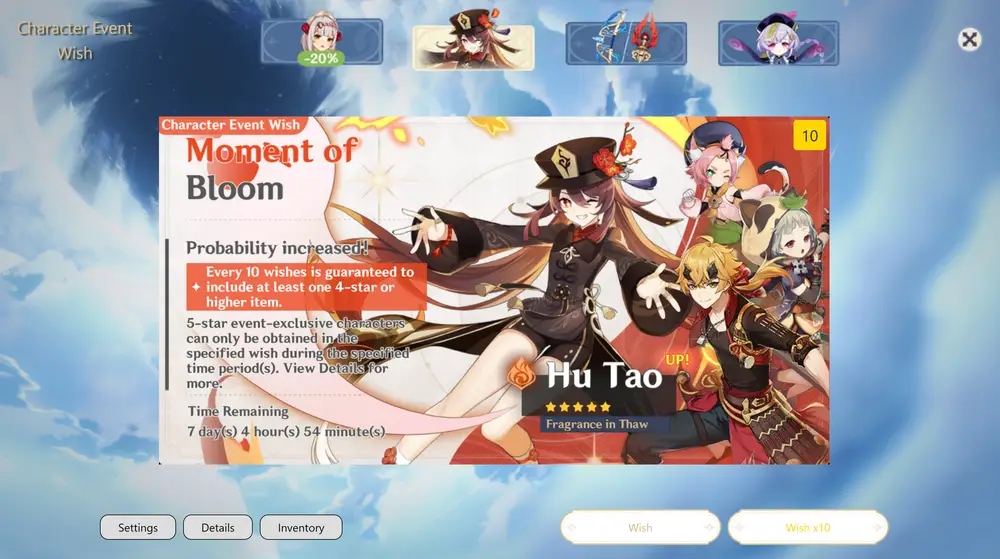 The Genshin Impact Wish simulator is like the game's gacha system. They let players try their luck on copies of all the banners that are currently available.

Because the wish simulators are independent of miHoYo and the main Genshin Impact game, no real-world money or Primogems are required.

Players can freely simulate their desires to see what characters and weapons they might receive from the in-game banners.

The colorful characters of Genshin Impact abound, but unlocking the game's best units can be extremely difficult. This is especially true if you want a specific 5-star rating.

In fact, if the character you want to unlock lacks a level-up banner, your chances of adding them to your roster are slim.

Fortunately, the Genshin Impact Wish simulator can provide you with the dopamine rush of unlocking these characters without having to spend your precious Primogems.

So, to help you get your fix of gacha games, we've put together a list of the best Genshin Impact Wish simulators you can play right now.

What Is Genshin Impact Wish Simulator?

The Wish system is an essential component of Genshin Impact, miHoYo's free-to-play RPG. At its core, Genshin Impact is still a gacha game, so Wishes are how miHoYo makes the majority of its money.

People can now try to predict which characters and weapons they'll pull when making actual Wishes in-game, thanks to a fan-made Wish Simulator.

To make a Wish in Genshin Impact, players must first obtain either Fates (which are extremely rare) or Primogems, the in-game premium currency. Fortunately, miHoYo frequently gives Primogems away for free through events and promotions.

Still, this means that players must exercise caution when making Wishes, which is why the Wish Simulator is so useful. It allows users to simulate their pulls without risking the loss of precious Primogems or Fates.

How Does The Genshin Impact Wish Simulator Work?

The Genshin Impact Wish simulator, while not perfect, can give users a good idea of what to expect when making actual Wishes in the game. It also has a Details tab that explains the pull rates and probabilities.

Users can select which Wish they want to simulate via the Settings tab, and the Inventory tab keeps track of the weapons and characters they've pulled so far.

Players can also check the Inventory tab to see how much real money they would have spent if they were making these pulls in Genshin Impact and paying for Primogems out of their own pockets.

Users can reset their inventories, which also resets the amount of money they would have spent theoretically.

Using this unofficial Wish Simulator can help you figure out how long it would take to get 5-star Banner characters like Tartaglia and some of the best weapons in the game.

It's also a lot of fun to see what users can get if they don't want to spend real money on Genshin Impact. Fans of the free-to-play RPG should give it a try before making their next Wish.

WishSimulator.App is the best Genshin Impact Wish Simulator because it includes all of the current banners in the game.

The screen is also a carbon copy of the one seen in Genshin Impact, so players will be able to listen to background music, purchase Fates, and watch the official banner animations.

As if that wasn't enough, WishSimulator.App also employs a Pity system similar to Genshin Impact.

This means that your pulls are nearly identical to those in the actual game. There is also the option to change various settings such as music, banners, and animations.

Uzair Ashraf's Wish Simulator is a useful tool because it keeps track of how many Fates you've used on a specific banner, indicating when your next 5-star pull is.

If that isn't enough, Travelers can select from all of the game's current banners, so if you want to unlock a specific character, simply switch to them.

You can select the type of wish you want to make at the top of the screen from the Beginners' Wish, Event Wish, Weapon Event, and Standard Wish options. To make your rolls, click the Wish buttons in the bottom right corner.

You may click Inventory to see everything you've unlocked (together with how much it would have cost in real money) or Details to see an explanation of how the odds on that desire are calculated on the opposite side of the screen. To start over with your inventory or choose a different event wish, click Settings.

This Genshin Impact Wish simulator is a little more basic than the others, but it does support Infinite Wishes. This means that travelers can live out their fantasies of having an endless number of familiar and intertwined friends without spending any real money.

Even though the banners haven't been changed yet to reflect the new Sumeru update, you can still use this Genshin Impact Wish simulator if none of the others appeal to you.

Yes, the Genshin Impact Wish simulator is completely free to use.

They are not 100% accurate. The Wish Simulator for Genshin Impact can give users a good idea of what to expect when creating actual Wishes in the game, even though it's not entirely accurate.

What Does Genshin Wish Simulator Do?

The Genshin Impact Wish simulators are websites and apps that allow users to wish on banners without using intertwined or familiar fates. They are not affiliated with HoYoverse, and any characters you win will not be added to your account.

Instead, the Genshin Impact Wish simulator is a fun way to try your luck or a great way to relieve stress after losing 50/50 on Genshin Impact's current banners.