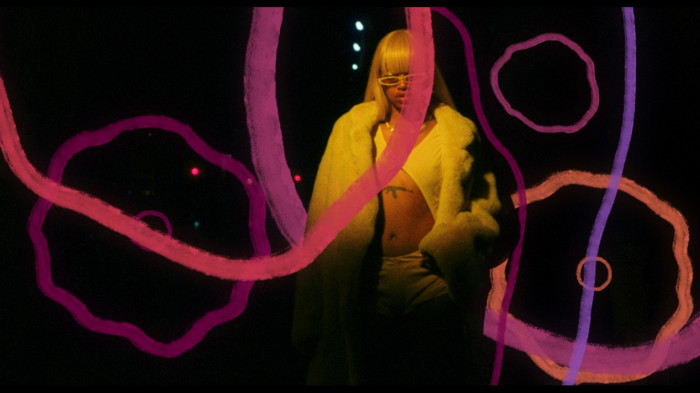 Slick Woods plays the titular streetwise 18-year-old New Yorker in “Goldie,” a character who’s constantly running toward, or away, from things — a life of perpetual motion that doesn’t actually get her anywhere. In the confident hands of Dutch writer-director Sam de Jong, Goldie’s story is one of big dreams and harsh realities, and the difficulty in learning one’s limits. With vibrantly expressive aesthetics that match the energy of its defiant and distressed heroine, this impressive coming-of-age indie, simultaneously premiering in select theatrical markets and on-demand on Feb. 21, heralds the arrival of both a distinctive new filmmaking voice and a leading lady with charisma to burn.

Tattood, gap-toothed, scantily clad Goldie has grand music video ambitions. However, as evidenced by an early dance performance at the community center where she lives with her adolescent sisters Supreme (Jazmyn C Dorsey) and Sherri (Alanna Renee Tyler-Tompkins), as well as her mom Carol (Marsha Stephanie Blake) and her mom’s boyfriend Frank (Danny Hoch), her enthusiasm far outpaces her actual talent. With closely cropped hair dyed the color of her name, Goldie is a little girl in a grown woman’s body. Director de Jong amplifies that impression through bold visual strokes: painterly animated colors swirling around and outlining his protagonist, and character-intro title cards in which a kid’s voice yells out each new individual’s name, in a manner reminiscent of “Sesame Street.”

Sharing a single room with her entire clan, Goldie’s life on the fringe is hardly perfect, but it collapses completely when Carol is arrested for selling drugs, and the three kids are forced to flee the community center before child services can take them into custody. Thus begins an odyssey of frantic desperation, as Goldie attempts to secure some money and a stable place to lay low with Supreme and Sherri. Her primary plan involves performing in an upcoming video for a hip-hop star (A$AP Ferg), which in turn necessitates, in her mind, the purchase of a glamorous yellow fur coat to match a skimpy canary-hued outfit she stole from a local shop. It’s an all-consuming goal, such that visions of her wearing the coat — along with sunglasses and a wig she’ll subsequently pilfer from rival Princess (Angela Griszell) — frequently materialize on screen in sudden blooming bursts.

To procure the coveted garment requires cash, though, which Goldie aims to earn by selling her mom’s stash of prescription pills. This leads them to visit former teacher Janet (Edwina Findley Dickerson); recently paroled friend Eli (George Sample III); remarried father Richard (Gbenga Akinnagbe); and sometimes boyfriend José (Jose Rodriguez), most of whom — along with Frank (who threatens to swindle her out of her drugs) — offer the same advice: Turn to child services for help, because it’s in the best interests of Supreme and Sherri. Convinced she can hustle her way out of this jam and make celebrity-grade money with her upcoming gig, Goldie refuses their guidance, thereby propelling her further down a wayward path.

Buoyed by a Nathan Halpern score that melds Latin and Jamaican hip-hop tunes with more lyrical storybook melodies, and Shawn Peters camerawork which alternates between whooshing handheld pans and gauzy slow-motion, Jong’s stewardship is at once wild and controlled, which can also be said of Woods’ performance. Her naked anxiety hidden, often clumsily, behind her giant radiant smile, Goldie is a tough nut with the best of intentions but subpar ideas on how to make them a reality. It’s a captivating turn, and one elevated by a sense that Woods’ heroine knows, deep down, that she’s in over her head. Clever and reckless in equal measure, Goldie has a hardened exterior to match her color-coded asphalt-jungle milieu — all sharp edges and sweaty, grimy, rough surfaces — along with a tenderness that makes her a most endearing underdog.