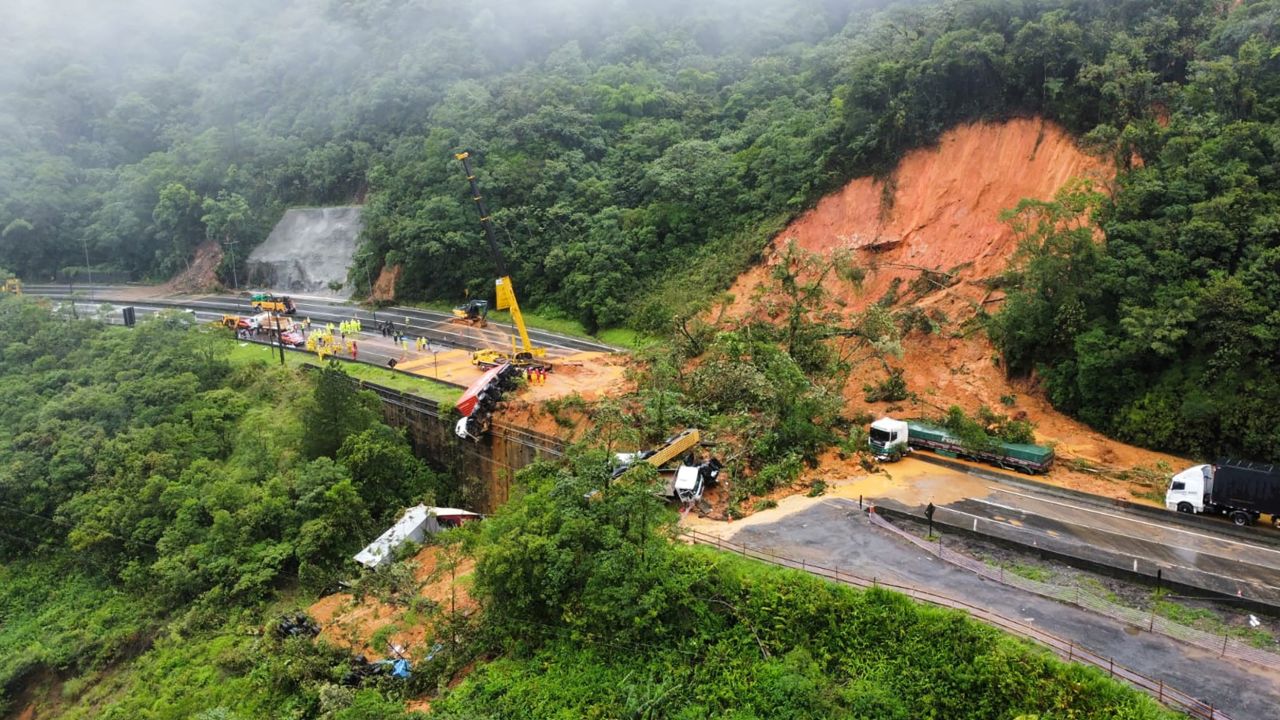 A landslide in the state of Paraná in southern Brazil claimed the lives of at least two individuals and left many missing. The landslide wipes out Brazil highway on Wednesday, November 30.

A landslide that followed a period of severe rain damaged Brazil's BR-376 highway. On a 200 meter (656 foot) length of the road, six trailers are thought to have been buried, along with up to fifteen other cars, according to the authorities.

According to a fire department spokesperson who spoke with the local media, between 30 and 50 persons may be missing.

It's hard to know the exact number of victims. A vehicle could have one to five people inside. We're working with an estimate of 30 to 50 people missing.

The spokesman went on to say that rescue attempts and cleanup of embankments are being helped by military police, firefighters, civil defense teams, and rescue dogs.

Images from the emergency services show that the enormous mudslide also took away a portion of the highway. According to police, over 20 automobiles and trucks were also carried away on Wednesday.

One of the six people the squad managed to save was the mayor of the seaside city of Guaratuba.

It was horrible. The mountain just fell on top of us. It swept away every last car. We're only alive by the grace of God.

Other coastal municipalities were also affected by flooding and flash floods brought on by heavy rainfall.

More than 500 impacted homes, some of which were destroyed, and more than 680 individuals were affected.

Drones with heat-detecting cameras are being used by a rescue team, which consists of 54 firefighters and specialists, to look for survivors. The responders claimed that the search effort is challenging due to the persistent severe weather and distant location.

The Parana state security authority said in a statement on Wednesday that 54 firefighters had been working continuously for more than 35 hours while also expressing his worries about additional landslides.

Fifty-four firefighters have been working non-stop for more than 35 hours. The teams are working around the clock. The situation in the area, which is already at risk, is likely to worsen in the coming days if it continues like this.

Authorities reported on Wednesday that dozens of people are still missing in Parana state as a result of landslides caused by recent heavy rains in southern Brazil.

Since Tuesday, vehicle traffic toward the coast has been prohibited on the BR-277 road to the ports of Paranagua and Antonina. The state of Parana announced that it planned to partially open the road at 3:30 pm (18:30 GMT).

According to the port authority, trucks carry about 80% of the goods exported from Paranagua, Brazil's second-largest port for grains and sugar. However, it was not possible to calculate the disruption's financial impact.

The stored products at Paranagua are already being moved by operators and terminals, and they should be sufficient until the weekend.

The Paranagua port authority stated that "if the situation is not normalized by the weekend, it is very likely that from Sunday and Monday we will already have difficulty in reception of cargo for boarding ships, especially in the export corridor."

Cargo train service to Paranagua has resumed with restrictions, according to rail operator Rumo (RAIL3.SA). Rumo claimed that it was keeping an eye on the state of the tracks and that cargo was being conveyed to the port.

Disastrous Landslides Are Common In Brazil

At least 56 individuals were reported missing, 25 were hurt, 3,957 were without a place to stay, and 533 were displaced, according to Regional Development Minister Daniel Ferreira, who spoke at a press conference earlier on Sunday in Recife, the state capital of Pernambuco in northeastern Brazil. On Wednesday, the first deaths that the authorities have acknowledged occurred.

Globo television channel claimed that a landslide in the Ibura neighborhood in the port city of Recife resulted in 19 deaths.

It further stated that a second landslide at Camaragibe, close to Recife, claimed the lives of three additional individuals. Two people passed away in Recife, and a third in Jaboatao dos Guararapes.

Local press accounts reported that a landslide in Olinda claimed the lives of three people, and a fourth person died after falling into a canal there as well.

The area has recently experienced severe rain, with more than 200 milliliters of rain falling in the greater Recife area in a single day.