Locals Stay Despite Russians Urging Them To Leave Kherson 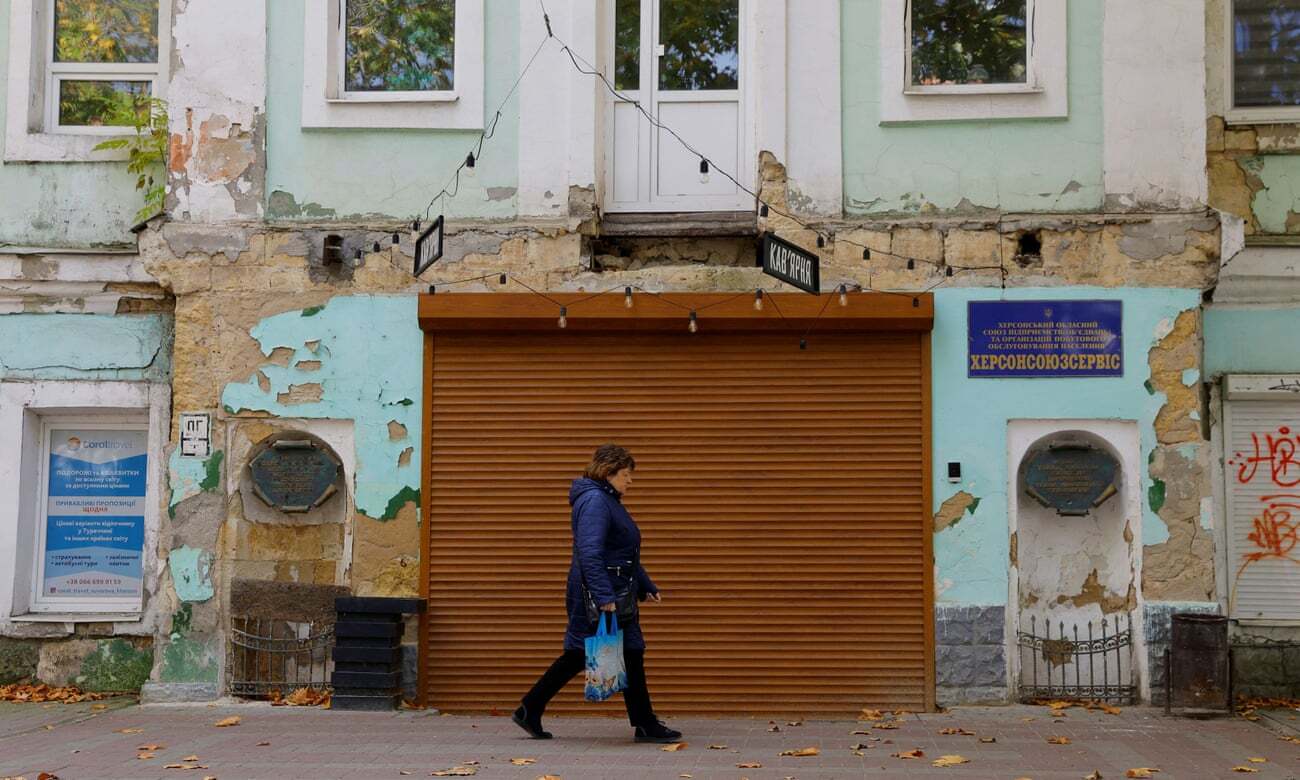 The city is heaving and gloomy more than eight months after the Russian military captured Kherson. Residents are urged to leave the city via a loudspeaker-equipped car, and late-night SMS messages are also issued. Locals stay despite Russians urging them to leave Kherson.

They stock up on food and water. They reject the idea of coerced relocation. There are rumors that people are being transported to distant parts of Russia.

Everything is veiled and frozen. There aren't any people out on the streets after 3 pm. They leave the house in the morning to do grocery shopping before relaxing at home.

The Russians are robbing Kherson. Everything has been removed, including office chairs, barges, fire trucks, and monuments to Suvorov, Ushakov, Potemkin, and Margelov. They enter apartments by force. Even the city hall's windows have been taken out. The city is currently the target of extensive, planned pillage. Loot is delivered to the river by cars, where it is then moved to the left bank by boats.

Kherson seldom has any internet access. Even Russian TV channels have stopped broadcasting, and communication has vanished. Because of this, there are a lot of rumors. While they wait for the release, they can hear Russia and Ukraine engage in an artillery duel.

A brave local from Kherson shared the daily struggle of those who stayed with The Guardian:

I’m used to living like this. I’m feeling philosophical.

In some ways, the living conditions are normal. There is water and electricity, heating works, rubbish is taken out. There is food, but food prices are rising daily. Some shops and hospitals are closed. Although medical equipment has been removed, I read on Facebook that the doctors of the city’s first maternity hospital are delivering babies. Somewhere they found an old gynaecological chair, tools and medicines, and they work. In war, too, children are born. Three pharmacies remained in Kherson. The rest were evacuated. I don’t need medication. I do not complain about my health.

For the past few months, I have been preparing food for the winter. Occasionally, I meet colleagues at work, acquaintances. If there is internet, I advise employees. Sometimes I go to the dacha. I’m reading – mostly fiction and memoirs – and improving my culinary skills. Last Thursday, I met a colleague and went to the grocery store. While I cooked, I talked with relatives. In the evening, I read for two or three hours. Last week, I made 11 litres of grape juice with grapes I picked at the dacha. It took over six hours. In the occupied city, the days go by slowly and monotonously. You need to find something to do.

I don’t feel safe. Russian soldiers can stop you on the street and detain you. They can break into your apartment, search it and take away anything. My apartment has already been searched and we were detained at the dacha, which is near the Antonovsky railway bridge. They thought that we were gunlayers. They beat me up and threw me in jail. They took away my travel equipment – backpacks, tent, money, a phone and a laptop – but nothing incriminating was found and they released me a day later under house arrest. Now the city is in chaos. I will go to the dacha again, to help my friend move to the right bank. Everyone who lives in the dachas have been told to leave by the end of the week.

Those who wanted to leave Kherson and could, left. But we did not have humanitarian corridors and organised evacuation to Ukrainian territory. To leave was either very expensive or you needed your own car. Those who couldn’t afford to leave stayed in Kherson.

All my pro-Ukrainian acquaintances ignored Russia’s “evacuation”, which was mainly used by collaborators and their families, and those who were frightened by their false claims that Ukraine would blow up Kakhovka hydroelectric power station and attack Kherson. This is a journey into the unknown.

I’m not hiding. I live in my apartment. I’m not alone. My cat, Hunter, lives with me. There is a family Telegram chat where every morning there is a roll call – they write to me from Kyiv, Chernivtsi, Bucharest. If there is a connection, I talk to them.

We know what’s going on with everyone.

There are few civilians left in Kherson now. I think 25% to 30%. I live in a multistorey building with 260 apartments. In the evening, no more than 20 windows are lit. Before the war, about 350,000 people lived in Kherson.

Soon, I think the right-bank part of the country will be liberated and that Ukraine will win. I am preparing to fight. I have built up food and water stocks, prepared the gas burner and decided on a reserve place to live. I stocked up on Hunter’s food as well. It is very hard to wait but I believe in liberation. I think it will happen this month.

Life has changed dramatically since Russia’s invasion. For people in occupied Kherson, the main thing now is to survive. I think about what will happen after the war.

When the occupation is over, I dream of seeing all my relatives and friends and returning to a peaceful life. I want to work, relax, travel. Faith in the imminent liberation of the city is keeping me going.

We want to create a family agricultural company and I will definitely go to the Camino de Santiago with my wife. Maybe someone else will join us, too. We had planned to do it back in 2020. But the pandemic happened, then the war. In the 21st century, only bloodthirsty savages are capable of this. They have no place in the civilised world.

Kherson, a significant port city in Ukraine, was one of the first to fall victim to a Russian attack after Vladimir Putin started conducting military operations there.

Eight months after the start of the Russia-Ukraine war, there are still no signs of a cease-fire. According to a confidential assessment, Kherson City is not only deserted during the day and at night, but its charm has also significantly deteriorated.