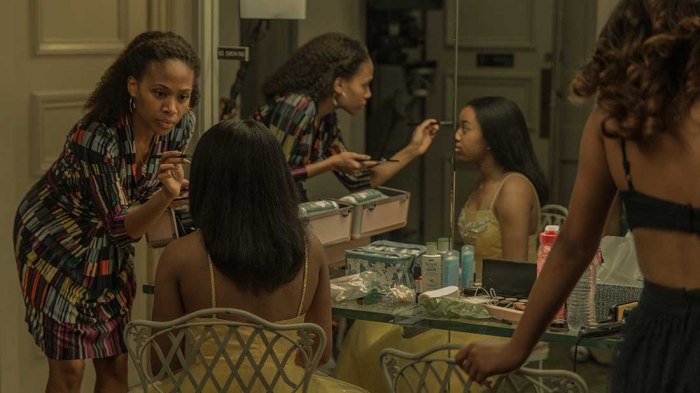 “Miss Juneteenth” richly captures the slow pace of ebbing small-town Texas life, even if you might wish there were a bit more narrative momentum to pick up the slack in writer-director Channing Godfrey People’s first feature. She’s got a very relatable heroine in Nicole Beharie’s Turquoise, an erstwhile local beauty queen whose crown proved the peak rather than the kickoff to her dream of a better life — high hopes now transferred to a daughter reluctant to inherit that burden.

This portrait of a whole community dogged by debt and diminishing prospect has a basic authenticity that will ring true for many viewers unaccustomed to seeing themselves onscreen. That is, people whose aspirations toward the middle-class American Dream grow ever more remote as the middle class itself struggles to maintain its position. (As one bleakly realistic character here opines, “Ain’t no American Dream for black folks,” anyway.) Rewarding if somewhat predictable in its overall storytelling arc, the indie drama might look more attractive to buyers if another editorial pass tightened its sometimes too-leisurely tempo a bit.

Juneteenth is celebrated in many African American communities, but got its start and raison d’être in the Lone Star state, where it marked the abolition of slavery in 1865 — a tardy two and a half years after the Emancipation Proclamation. (Being in the farthest-flung Confederate territory, Texas slave owners eluded compliance longer than their more eastern neighbors.) Beharie’s heroine had her moment of glory in 2004 as the local pageant winner, a title she worked hard for, as she does everything.

Yet she’s still stuck in a hometown that remains poor and segregated (presumably whites live in other Greater Fort Worth hamlets), working two job and behind on her bills. She’s still involved with the father of her child, Ronnie (Kendrick Sampson). He’d like to marry her, but she can’t stop thinking she shouldn’t settle for an auto mechanic, petty gambler and generally none-too-reliable old beau. Offering Ronnie competition is Turquoise’s boss at the funeral home (Akron Watson) where she logs a few hours sprucing up corpses, when not working at Wayman’s BBQ and juke joint alongside gregarious Betty Ray (Liz Mikel).

What Turquoise does want is for 15-year-old daughter Kai (Alexis Chikaeze) to become the next Miss Juneteenth, using the pageant’s college scholarship and other perks to do all the things mom meant to but didn’t. But Kai’s dreams aren’t her mother’s, and she’s beginning to chafe under prudish parental restrictions more apt for a Catholic girls’ boarding school. Of course, Turquoise isn’t thrilled that Kai already has a boyfriend (Jaime Matthis). She’s even less enthused about her offspring’s burning desire to join a competitive dance squad, despite rumors that Turquoise once had to pay the rent as a stripper.

These conflicts (plus our heroine’s tense relationship with her own mother, Lori Hayes’ semi-reformed alcoholic-turned-evangelical holy roller) simmer nicely, yet never quite come to a boil in a film that isn’t dull but can feel laid-back to a fault. It doesn’t help that some of the dialogue is a bit muddy (or just mumbled), and the soundtrack of R&B and church music seemed to be mixed too low at the Sundance premiere. This movie needs at least an occasional surge of energy, either emotional and aesthetic. Instead it stays on too even a keel, with some scenes meandering to the brink of rudderlessness.

Nonetheless, the major characters feel well-defined in the writing and in their capable interpreters’ hands, with Beharie and Sampson fine as easy-to-read yet complicated personalities. There are good support turns, too, even if a few minor roles verge on caricature.