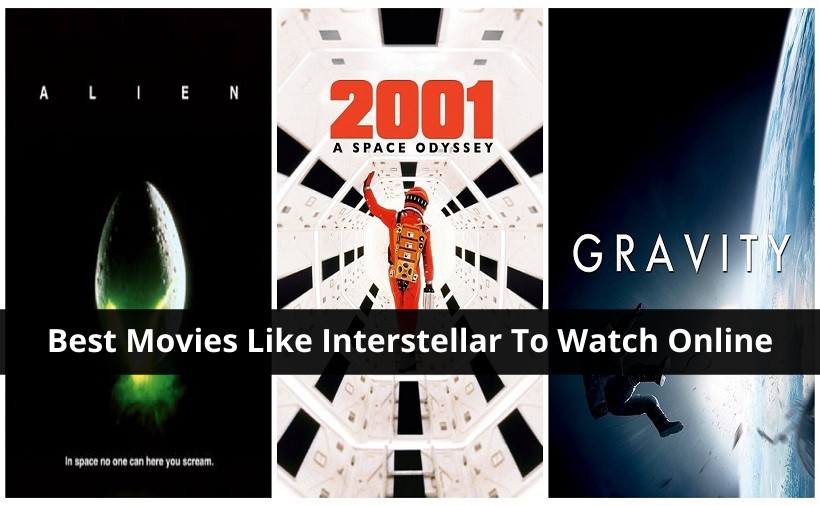 It doesn’t matter if you like space movies and astronauts, Interstellar makes you like them. The plot is so riveting and twisted that by the end of the day, you are questioning your life choices, not liking space movies being one of them.

The plot is pretty complicated and it can take you a double watch to understand the main concept. But, let’s be real, every minute watched is worth it in the end.

Latest: Best suspense movies of all time made in Hollywood

All that said, if you liked Interstellar and you are looking for similar movies to watch, we have a list for you to go through.

Overview: If there is one space movie that paved the way for more, it’s this one. A Space Odyssey is a legend in itself and if you have watched Interstellar, you’ll know that both these movies are made on similar themes.

As for the plot of the movie, it involves Discovery One and a supercomputer, which work together to seek the presence of a mysterious monolith that appeared even before the dawn of men on this planet.

For a movie that was released in 2001, directed by Stanley Kubrick, this sure does pack in every last detail that a space lover would want to indulge in.

Overview: Next up is Gravity, a 2013 release directed by Alfonso Cuarón, a Mexican film director. The movie is an astronaut’s worst nightmare. The movie familiarises you to the characters of Ryan Stone, a space engineer, and Matt Kowalski, a veteran on his last mission before retirement.

But, as luck has it, their spaceship crashes, leaving behind remnants. The only thing they now have is the remains and a ticking clock. As people look for gravity to ground them down, that is the last thing they have and as they spiral more, they move farther away from Earth, their home.

The build-up of the movie is pretty complex and slow in the beginning but it does get over time. You won’t even realise that you are likely praying for the characters by the end.

Overview: Now, before you question things, this is not your typical space movie. But, the themes are a lot similar. The movie was released in 2016 and directed by Denis Villeneuve.

The movie starts with Louise Banks, a linguist, and Ian Donnelly, a physicist, getting recruited by the military to make contact with a group of aliens or the seven-limed heptapods, and possibly find out what they want.

For a plot that is interesting and such heavy twists every turn, the movie has managed to bag eight Academy Awards nominations. If you are someone who doesn’t enjoy movies about aliens, this is going to be an exception you make.

Overview: Released in 2007, Sunshine is yet another pleasing space movie you wouldn’t regret watching. Just like the name of the movie suggests, this one deals with the sun and a possibly dying planet. A credible team of astronauts is assigned to assess the situation and possibly save the sun.

But, as luck would have it. Things don’t go as smoothly as planned and soon a disaster puts the lives of the astronaut in danger. Even though the movie did fail to make a good impression at the box office, this movie contains everything that a possible space thriller needs. You need to give this a try before you say no. This movie is directed by Danny Boyle. This movie is available to watch on Amazon Prime & Youtube online.

Overview: This 1979 release is nothing short of a masterpiece. Apart from the space elements, the movie packs in sci-fi genres with horror elements that keep you hooked from the start till the end.

When the crew of a spacecraft, Nostromo, consistently receives a distress signal from a planet near them, they try to get into it and dissect the issue behind. But, as luck would have it, things take a turn for the worse when an alien attacks their spaceship and then takes control over it.

This movie is directed by Ridley Scott. The movie is more than just a space movie. It packs in discussions concerning traditional gender roles, reproduction, and feminism.

Overview: Adapted from Stanislaw Lem’s novel, Solaris is a treat to watch. It is a very different movie from some of the traditional space movies involving investigations and disasters.

In this, a psychologist is sent to a space station orbiting a planet named Solaris. They are sent there to find answers behind the death of a doctor along with some of the concerns of the mental health issues of cosmonauts on the station. Upon investigation, they soon find that the water available in Solaris is a form of the brain that reignites repressed thoughts and memories in individuals. The movie is directed by Andrei Tarkovsky.

Overview: Based out of the little village of West Virginia, October Sky is a budding inspiration for space scientists. Starring the characters of Homer Hickam Jr. along with his friends, the very first artificial satellite in the world instils hope in their minds that there is more to be done.

The movie is a whole lot of science experiments featuring DIY rockets from scavenging railroads to launching them with disastrous trajectories. The movie is based on a true story of how Hickam made his journey to NASA and depicts Homer’s ride to space. The movie is directed by Joe Johnston and released in 1999.

Overview: This movie is more than what life as an astronaut is. It shows the dark side of the profession and how things are not as easy as they seem to be.

The movie depicts the story of a lonely astronaut, Sam Bell, who is on the moon on his lunar mission, with the company of some dejected robots and computers around him. For a movie that starts with some amazing shots and cinematography, you soon tumble down to the bottom end of the ladder.

The end of the movie is a cross between dystopia and hallucinations that leaves Bell questioning the base that he is currently working on. The movie was released in 2009. You can watch it on Amazon prime and Netflix.

Overview: We all know about Apollo 13, don’t we? But, this movie is the best representation of the near-fatal moon mission that has been etched down in history. This is hands down one of the best space movies to exist to date.

The movie depicts the lives of astronauts Lovell, Haise, and Swigert who go on the Apollo 13 moon mission only to be faced with a disaster of their spaceship getting damaged. With so much stress and no possible way in sight, NASA now has to find a way to bring them back home. The movie was released in 1995 and was directed by Ron Howard.

Popular: List of best Tornado movies for you to watch online

Overview: Adapted from a novel written by Carl Sagan, Contact is yet another space movie that you’d like watching if you are still recovering from the essence of Interstellar. The movie talks about some heavy scientific questions and arguments that science buffs will enjoy unravelling.

The movie begins with the character of Dr Ellie, a radio astronomer, who finds the existence of aliens with the help of radio signals. Upon receiving and interpreting the signals, she works with her colleagues to promptly decipher the instructions to finally build a machine. It was released in 1997 and was directed by Robert Zemeckis. This movie is streaming on Netflix and Amazon prime online.

Overview: Released in 2016, Hidden Figures is a pretty recent movie that packs in all the elements of thrill and space that you would want after watching Interstellar. This is a women-centric movie highlighting the impact of African-American mathematicians in the history of US Space programs.

The movie introduces the world to three African-American mathematicians whose contribution played a major role in the launch of John Glenn into the orbit. But, as normal instances happen around the workplace, their credibility consistently meddles with racial and gender discrimination at work. This movie is directed by Theodore Melfi.

Overview: If you keep up with space news and just the history surrounding it, you’d know that the Russians are the first to put out Sputnik into space. With Russia on the leaderboard, the U.S works even harder to catch up.

This leads to seven pilots signing up for the very first American space program, Project Mercury. But, things do take a turn for the worse when Chuck Yeager, the best of them, denies going on the mission. But, with the first round, things are tested out and soon reveal how the space programs lack the expertise and how people select things unimaginably. The movie was released in 1983 and directed by Philip Kaufman.

2. Where Can I Watch Similar Movies Like Interstellar Online?

You can watch similar movies on OTT platforms like Netflix, Amazon Prime, Youtube, Vudu, Disney and so on. Other platforms can be reached by searching them on different search engines like Goole, Bing & Yahoo.

3. What Is The Language Of This Interstellar Kind Of Movies?

These kinds of movies are available in almost all languages. Primarily these films are available in the English language. and they are sometimes produced in the national language of a particular country and are then dubbed in other languages so viewers across the globe can enjoy such kind of films.

4. Are Interstellar Kind Of Movies Worth Watching?

If you like the Interstellar movie and love watching science fiction and thriller stories online, then you must watch this kind of super graphics, based on future earth and mind-blowing drama story movies. Such movies will give you a thrilling experience while watching, but they are always worth every minute of watching. People who want to experience the space, moon, and universe with twists, and turns like in the Interstellar through cinema then they would love similar kind of films mentioned in this post.

5. Is It Possible To Download Movies Similar To Interstellar Online?

No, you need to rent or buy to watch movies on platforms like Amazon prime and youtube. incase if you want to watch movies on OTT Platform like Netflix then you need to take their paid subscription based on your need and interest. Always support the original content creators by watching movies only through official & legal sources on the internet.

Space Movies are more than your typical spaceships and aliens. Interstellar is complicated on the first watch but it tickles your senses making you want to watch more around the similar themes. In case you are still recovering from watching Interstellar and want to have a go at some similar movies, we have listed out a few for you.

Only for you: Why Murph from Interstellar looks so familiar

We don’t assist or promote any kind of piracy stuff or torrent websites here. Piracy of any authentic content material below Indian legislation is a punishable crime and we oppose this piracy. We are just providing legal information that is available on the internet. The content material that’s given above is simply to provide the wanted details about unlawful actions. We have only provided the official, legal links to watch movies on their respective OTT platforms. Its objective shouldn’t be at any time and in any solution to assist in piracy and morally unsuitable acts. So, we request our readers to please steer clear of such web sites and decide the precise manner or authorized websites to access movies online.