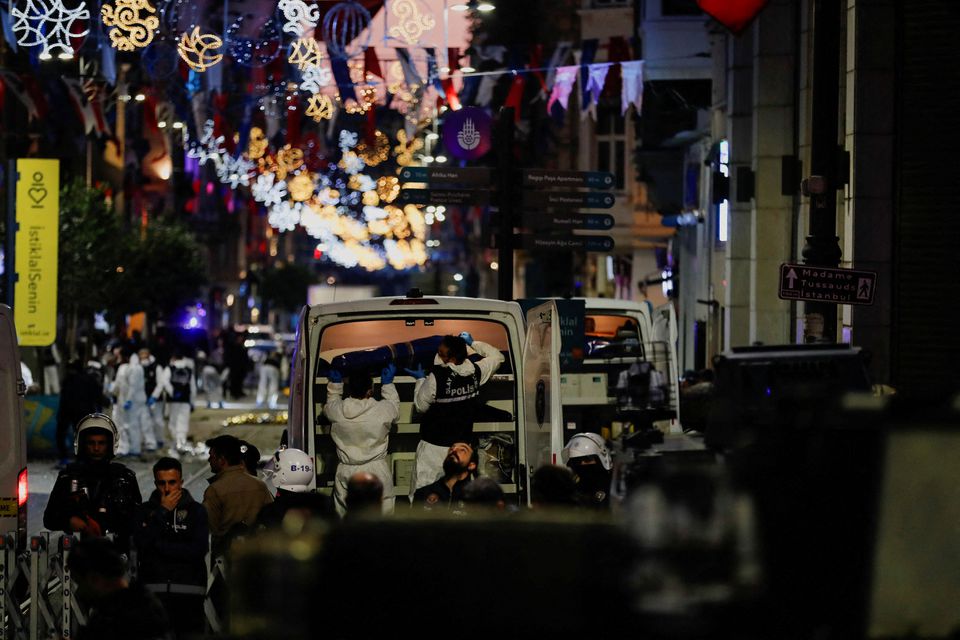 A suspected terror attack in the heart of Turkey’s Istanbul kills 6, wounds 81 on Sunday.

Following the explosion, hundreds of people fled the famed Istiklal Avenue as police and paramedics rushed to the scene. The neighborhood in the largest city in Turkey, Beyoglu, had been busy during the weekend with shoppers, tourists, and families as usual.

Speaking on Sunday before leaving for the Group of 20 (G20) summit in Indonesia, Turkey’s President Recep Tayyip Erdogan called the explosion a "treacherous attack" and promised that those responsible would face consequences.

At a press conference, he stated that "our people can rest assured that the culprits behind the attack will be punished as they deserve," adding that preliminary data suggested "a woman played a part" in it.

It would be wrong to say this is undoubtedly a terrorist attack, but the initial developments and initial intelligence from my governor is that it smells like terrorism.

According to Erdogan, two individuals died at the hospital and four perished at the scene. The explosion happened on Sunday at about 4:20 p.m. (13:20 GMT), according to authorities.

Vice President Fuat Oktay visited the scene hours after the explosion to provide the most recent fatality and injury toll and made a "very soon" vow to tackle the issue.

Authorities later revealed that two of the victims were a federal ministry employee and his daughter. Two of the five patients in intensive care were in a critical state.

Pictures of the woman who authorities assume was responsible for the attack and who was a PKK member have been provided to Al Jazeera.

Bekir Bozdag, Turkey's Justice Minister, told A Haber television that a woman was seen sitting on a street seat for more than 40 minutes.

He claimed that she had only recently gotten up when the explosion happened.

There are two possibilities. There’s either a mechanism placed in this bag and it explodes, or someone remotely explodes [it].

The other two suspects are two extremely young men who were born after 2000, according to what she gathered through her sources.

There are two possibilities. There’s either a mechanism placed in this bag and it explodes, or someone remotely explodes [it].

I learned from my sources that the other two suspects are two very young men who were born after 2000.

Koseoglu stated that no information about the offenders' names was currently available.

According to Koseoglu, there haven't been any recent alerts about assaults in the city, thus the explosion is shocking.

However, she added, "but security measures have remained high in the area."

People were seen ministering to the victims in footage from the attack's aftermath. Later, white-clad detectives could be seen gathering evidence from the area.

"When I heard the explosion, I was petrified, people froze, looking at each other. Then people started running away. What else can you do," asked Mehmet Akus, a 45-year-old waiter at a restaurant on Istiklal.

"My relatives called me, they know I work on Istiklal. I reassured them," he said, according to Reuters.

A helicopter hovered above the incident, while Taksim Square, nearby, had a lot of ambulances stationed there. According to the Turkish Red Crescent, blood was sent to area hospitals.

If true, it would be Istanbul's first significant bomb explosion in a number of years.

A militant Kurdistan Workers Party (PKK) offshoot claimed responsibility for the twin bombings that occurred outside an Istanbul soccer stadium in December 2016, which left 155 people injured and 38 dead. Turkey, the European Union, and the United States have all designated the PKK as a terrorist organization.

Grievances for the victims and condemnations of the incident came from a number of nations, including Greece, Egypt, Ukraine, the United Kingdom, Azerbaijan, Italy, and Pakistan.