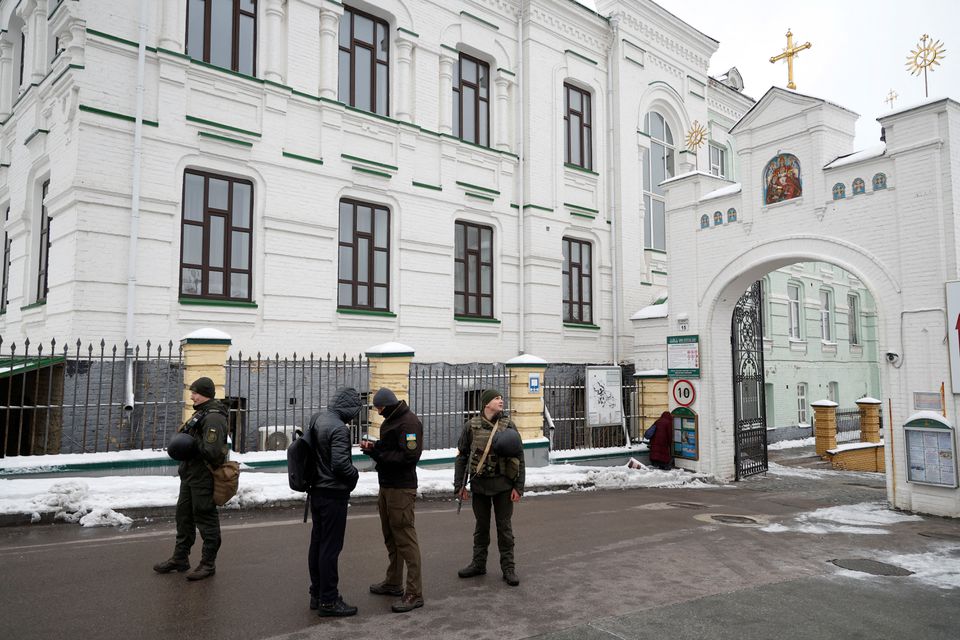 In an effort to stop what are believed to be "subversive activities by Russian special services," Ukraine's SBU raids Russian-backed monastery in Kyiv.

The expansive Kyiv Pechersk Lavra complex, also known as the Kyiv Monastery of the Caves, is located south of the city center. It is a Unesco World Heritage site, a 1,000-year-old Orthodox Christian monastery and a Ukrainian cultural treasure, and the seat of the Russian-backed branch of the Ukrainian Orthodox Church that is under the Moscow patriarchate.

Some of the UOC's most prominent clergy have been charged with continuing to covertly assist Moscow and using their position to sway churchgoers.

The Kremlin stated that the raid was another assault by Kyiv against Russian Orthodoxy.

On Tuesday, the SBU security agency in Kyiv declared that it was carrying out "counter-intelligence measures" to combat the "subversive activities" of Russian special services. It claimed that areas that draw sizable crowds of people carry a higher danger of attack, sabotage, and hostage-taking.

"These measures are being taken ... as part of the systemic work of the SBU to counter the destructive activities of Russian special services in Ukraine," the Security Service of Ukraine (SBU) said in a statement.

SBU also stated that the search was conducted to investigate concerns "about the use of the premises ... for sheltering sabotage and reconnaissance groups, foreign citizens, weapons storage," with the intention of preventing the cave monastery from becoming "the centre of the Russian world."

The monastery, which is a UNESCO World Heritage site, was among the Orthodox churches searched by officials on Tuesday in response to concerns that clergy members may have been supporting the Kremlin and extolling Russia.

A week ago, a video of pro-Russian propaganda being performed that alluded to Mother Russia's awakening surfaced, prompting the opening of a criminal investigation.

Days later, the leader of a diocese in central Ukraine's Vinnytsia region was tasked with creating leaflets supporting Russia's invasion.

Ukraine has allegedly been "at war" with the Orthodox Church for a very long time, according to Kremlin spokesman Dmitry Peskov. Kirill, the patriarch, denounced "act of intimidation of believers."

The patriarch, who serves as the head of the Russian Church, is largely regarded as President Vladimir Putin's buddy and has endorsed the Russian conflict in Ukraine wholeheartedly.

He painted the conflict as a struggle of "metaphysical significance" against sin and Western pressure to stage "gay parades" shortly after the invasion started.

In a more recent statement, he claimed that any Russian who enlisted for duty in Ukraine was performing "an act that is tantamount to a sacrifice".

President Vladimir Putin's new foreign policy theory, which strives to defend Russia's language, culture, and religion, is centered on the idea of the "Russian world." Conservative ideologues have used it as justification for foreign involvement.

The SBU withheld information regarding the results of the raid on Tuesday. Before allowing worshipers inside, armed officers were spotted checking their IDs and going through their bags.

Relations between Russian and Ukrainian Orthodox Christians will become much more strained as a result of the attack. The searches were condemned by the Kremlin as being the most recent act in Kyiv's "war" against the Russian church.

The Russian Orthodox Church and Ukraine have been at odds for a very long time, according to Dmitry Peskov, a spokesman for the Kremlin, "we could see this as yet another link in the chain of these military actions against Russian Orthodoxy."

"Like many other cases of persecution of believers in Ukraine since 2014, this act of intimidation of believers is almost certain to go unnoticed by those who call themselves the international human rights community," said Vladimir Legoida, a spokesman for the Russian Orthodox church.

The war has exacerbated an ongoing dispute over religious loyalty between the Orthodox churches of Russia and Ukraine. Three years ago, the Ukrainian Orthodox church effectively seceded from Moscow's control, costing Russia numerous Ukrainian parishes; yet, many ancient churches and monasteries have continued to adhere to Russian political and theological policies.

A senior clergyman from the western Vinnytsia region was accused by the SBU last Friday of trying to distribute flyers that supported Russia's invasion of Ukraine.

The Russian church's backing for what Moscow refers to as its "special military operation," rather than an aggressive war, led the Ukrainian Orthodox Church of the Moscow Patriarchate to sever its ties with that country's church in May.

According to a study conducted in 2020 by the Razumkov Centre in Kyiv, 34% of Ukrainians identified as belonging to the country's primary Orthodox church, while 14% belonged to the Moscow patriarchate church.

In an effort to move away from Russia and toward the west, the Ukrainian Orthodox Church announced early in November that it would permit its congregations to celebrate Christmas for the first time on December 25. Historically, Ukrainians have celebrated Christmas on January 7, which is when Jesus was born according to the Julian calendar.

Moving the holiday to December 25 was considered as a step in a larger national process of destroying communist, Soviet, and Russian symbols that began in 2014 with Putin's annexation of Crimea and the outbreak of a pro-Moscow rebellion in the eastern Donbas region.