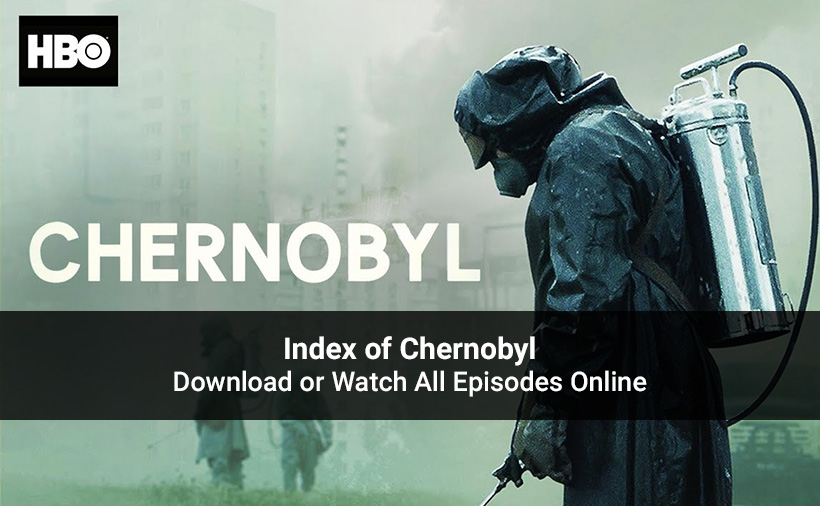 HBO made some unforgettable web series like Game of Thrones, Big Little Lies, and Silicon Valley. One such most effective and popular mini-series of HBO is Chernobyl series. Created by Craig Mazin, Chernobyl is a historical drama mini-series based on the most horrific human-made Nuclear Disaster of 1986 in Pripyat City of Ukraine, and its after-effects. It is based on Alexievich’s book depicting the incident of the Chernobyl Power Plant. It revolves around the story of brave people who sacrificed their lives to save Europe from this human-made disaster.

Chernobyl series will give you the perception of how the misconduction of some people led to the explosion of the nuclear reactor and how the Soviet government tried to cover it up by putting innocent lives in danger. The Chernobyl series will reveal one mystery after another, and each episode of this series will depict a complete and unique story. So, if you haven’t watched this excellent Chernobyl TV series yet, here is a small recap with the index of Chernobyl series for you.

You May Like: Is ‘Big Little Lies Season 3’ coming? What We Know So Far!

Interesting News: Chernobyl’s Craig Mazin to adapt The Final of Us for HBO

So, are you excited for the Index of Chernobyl? Here you go!

Chernobyl Season 1 Episode 1 Plot: The first episode of Chernobyl season 1 revolves around the explosion of the Chernobyl Nuclear Power Plant and how government officials try to suppress it by risking innocent lives. The episode begins with Valery Legasov, the chief of the commission investigating the disaster. On the second anniversary of the disaster, Valery records a tape blaming other engineers Anatoly Dyatlov and his superiors for the explosion, hides the videotape, and dies after that. Two years back, Vasily’s pregnant wife witnesses the explosion of Reactor 4 of the Chernobyl Nuclear Power Plant at 01:23:45. Please note that Chernobyl season 1 episode 1 subtitles are available on the Hotstar VIP. 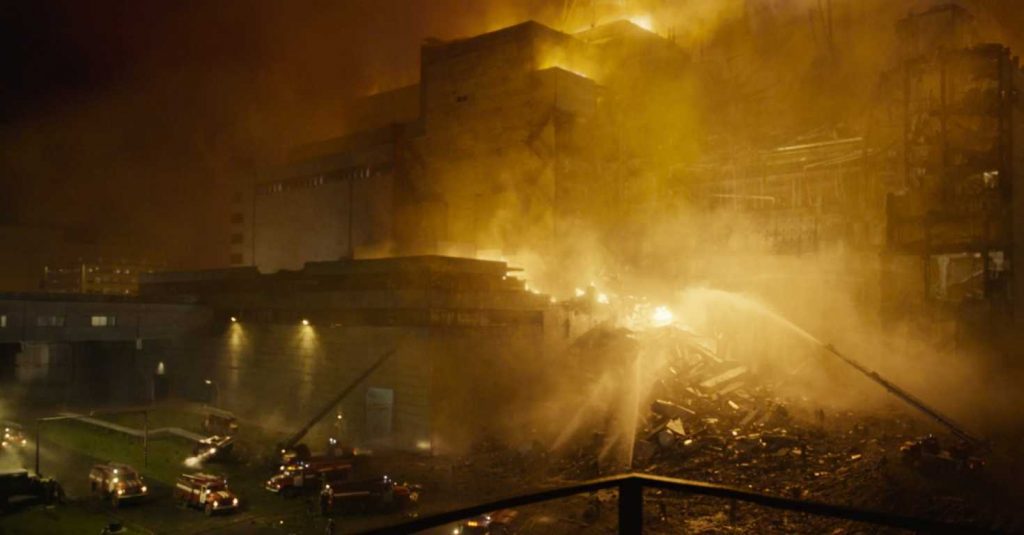 Chernobyl Season 1 Episode 1 goes ahead like this: At the control room of Reactor 4, Anatoly Dyatlov abates the evidence of Reactor Explosion and calls firefighters to control rods to restore cooling manually and resigns from his post. During this operation, multiple firefighters, including Vasily, comes in contact with harmful radiation and suffer from Acute Radiation Syndrome. Plant Director Bryukhanov, Chief Engineer Fomin, and Dyatlov together concluded that the explosion of hydrogen caused leakage of contaminated vessel water and elected the Pripyat Executive Committee to minimize the incident’s effects and block evacuation. Sitnikov, Deputy Chief Operational Engineer, notices the Nuclear Graphite on the ground, but others reject it. Dyatlov dies due to ARS, and Sitnikov exposes to lethal radiation during his inspection. Committee informs Legaslov about the under-control accident and asks him to provide Technical advice to manage the response.

Recommended For You: Contagion Movie – Download or Watch Online! 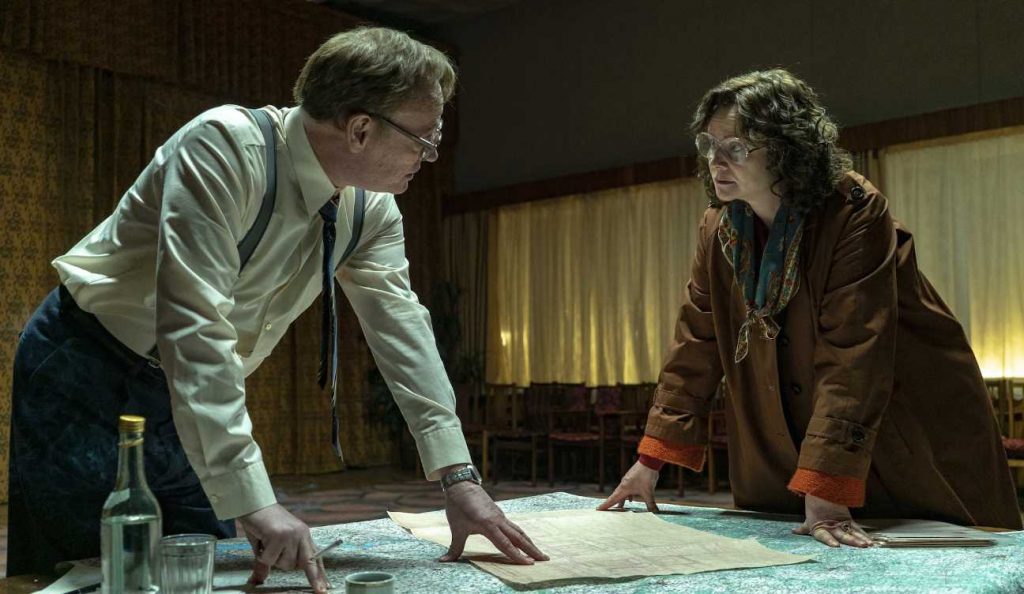 Chernobyl Season 1 Episode 2 Plot: After seven hours of the explosion, Ulana Khomyuk detects the rise in the radiation level in Minsk. When she discusses it with the local authorities, they deny it, and she leaves for Chernobyl, the primary source of radiation. At the overloaded hospital of Pripyat, Lyudmilla finds that Vasily and the other ARS patients are being evacuated to Moscow. Legasov learns that situation is much serious than the committee informed him and leaves to investigate the incident with Boris Shcherbina. Legasov witness the graphite debris and blue rays from Ionizing radiations, which confirms that Core Reactor was exploded. When Shcherbina confronts Fomin and Bryukhanov about it, they accuse Legasov to misinform the case. Chernobyl Season 1 Episode 2 goes ahead..

But high dosimeter reading of Pikalov confirms that Legasov was right. News spread, and Pripyat starts evacuating. Legasov gives instructions to the Military to use Sand and Water to suppress the fire, but for that, they have to risk their lives. But Khomyuk warns Legasov that a massive steam explosion will happen if water will come in contact with the molten core in the flooded basement. Considering his warning, Legasov authorized the lethal mission to drain the water and Plant workers Ananenko, Bezpalov, and Baranov volunteer for this mission.

The Chernobyl season 1 episode 2 is available to watch with subtitles. 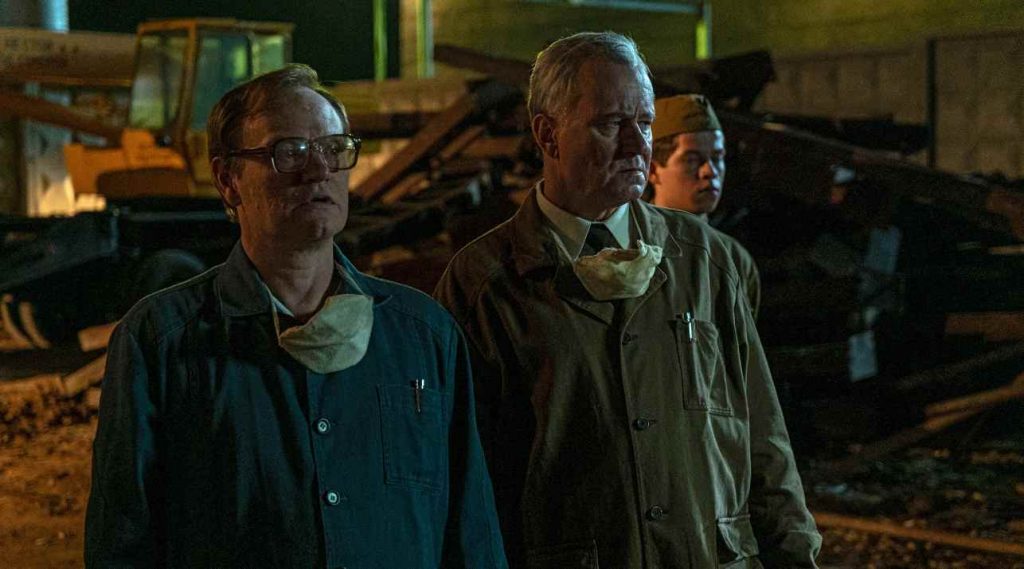 Chernobyl Season 1 Episode 3 Plot: The third episode revolves around the after-effects of the disaster. Water from the basement is successfully drained, but the nuclear meltdown has started, which will result in the contamination of groundwater. Shcherbina and Legasov ask Gorbachev to provide a heat exchanger under the plant. To excavate the tunnel and control the condition, Glukhov recruits Mikhail from Tula Miners. Legasov admits Khomyuk to a Moscow hospital where she witnesses Dyatlov is not cooperating with the hospital staff. There she met Tuptonov and Akimov, who are about to die.

They confess to Legaslov that reactor 4 exploded because Akimov triggers the emergency shutdown, which was thought to be impossible. To meet her husband, Lyudmilla lies about her pregnancy and violates the rule to stay with Vasily, whose condition is deteriorating every day. After learning about Lyudmilla’s pregnancy, Khomyuk threatens them to report everything to the committee, on which KGB agents arrest her. However, Legasov manages to release her. Scherbina and Legasov discuss their plans of decontamination and ask for the mass mobilization of liquidators. Vasily dies from ARS, and his body is buried at a mass grave in concrete. In case, you love watching TV series with subtitles, chernobyl season 1 episode 3 comes with subtitles on the Hotstar VIP.

Episode Name: The Happiness of All Mankind

Chernobyl Season 1 Episode 4 Plot: The fourth episode revolves around the rescue operation to save humankind and how innocent animals lost their lives in this process. Decontamination process begins, and residents are evacuated from Chernobyl Dangerous Zone. Hundreds of abandoned animals are killed to prevent the spreading of radiation. 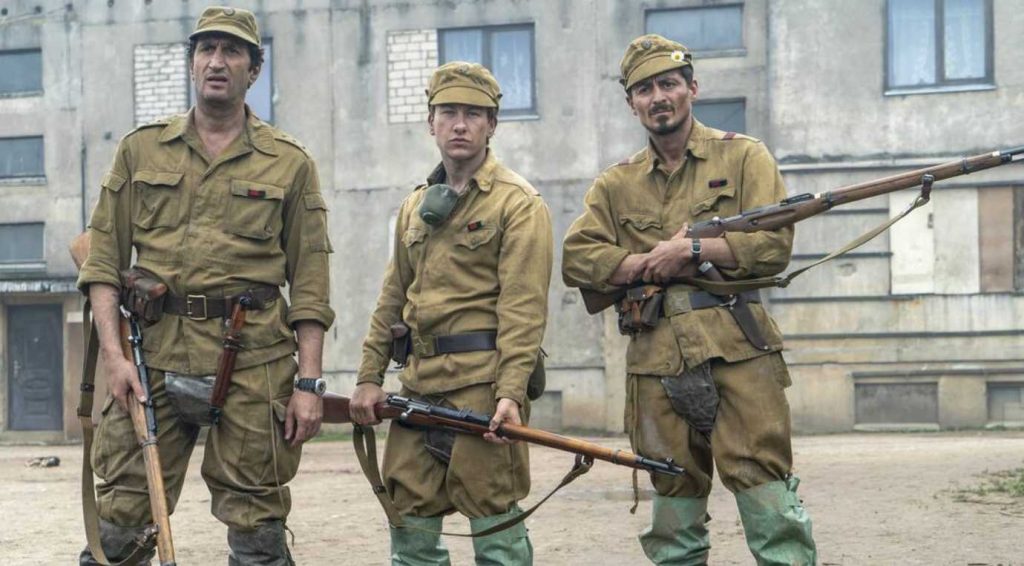 Khomyuk starts investigating the Moscow archives and confronts Dyatlov, who is recovering now to know the whole truth. Khomyuk displays the article based on a similar incident in 1975 at Leningrad Nuclear Power Plant and how KGB agents tried to suppress it. Lyudmilla gives birth to a baby girl, but she will die soon due to radiation poisoning. Khomyuk requests Legasov to confess the complete truth in front of the International Atomic Energy Agency, while Scherbina takes precautions to save the team from the retaliation of the government. Moreover, Chernobyl season 1 episode 4 also available with subtitles!

Chernobyl Season 1 Episode 5 Plot: The finale episode of Chernobyl revolves around the testimonies of Plant workers and government officials and how they led to such a horrific Nuclear Disaster. Legaslov lies in his first testimony in IAEA in Vienna, after which Dyatlov, Bryukhanov, and Fomin are confined in the abandoned city of Chernobyl for trials. Shcherbina reveals in his statement about the working of the Nuclear Power Plant. After this, Khomyuk and Legaslov provided details of the accident and how it happened.

The flashbacks depict that delay of 10 hours, and Dyatlov’s impatience caused the blockage of the reactor and to control the situation Akimov initiated the emergency shutdown. But the flaw in the design caused the control rods to spike the power ten times than the reactor’s limit, and it exploded. 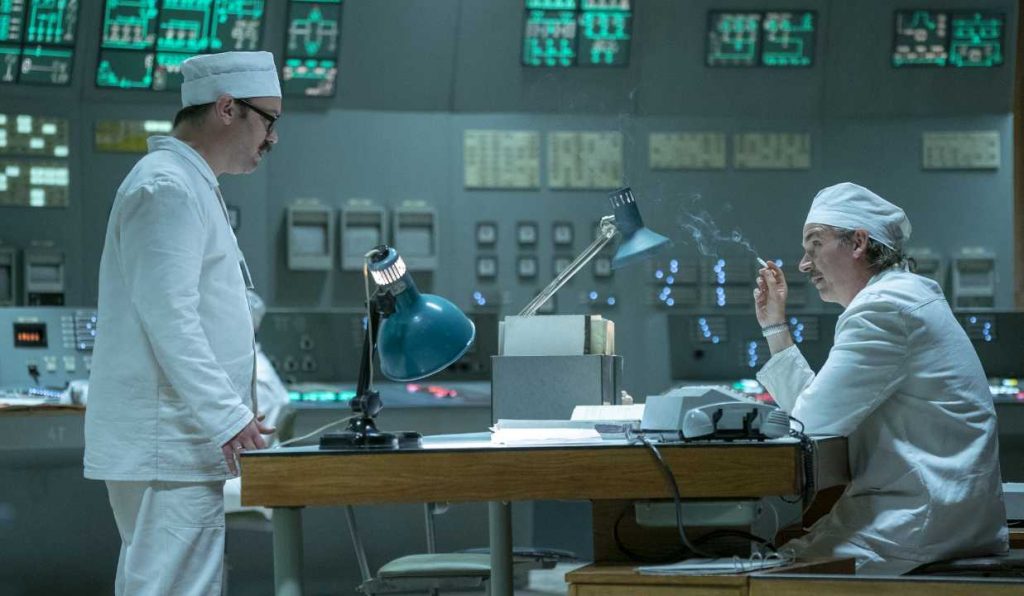 Legaslov also reveals that he lied in his first testimony and suppressed the information about Leningrad Plant. Legaslov also told that KGB detained him and warned him not to talk about Chernobyl with anyone; otherwise, he won’t be able to work in the future. The ending of the episode depicts the fates of Legaslov and other figures, and the after-effects of the disaster. The mini-series depicts the sacrifice of innocent people and how the mistake of few people led to the sufferings for hundreds of people.

Despite being a mini-series, Chernobyl is not a fast-pacing web series, and every episode perfectly builds the story. The last episode of the mini-series provides answers to almost every query that will come into your mind while watching this series. The story of Chernobyl mini-series is gripping with perfect background music and costumes. So, if you haven’t watched this mini-series yet, it is the ideal time to binge-watch it. Chernobyl season 1 episode 5 is a finale of the mini series. 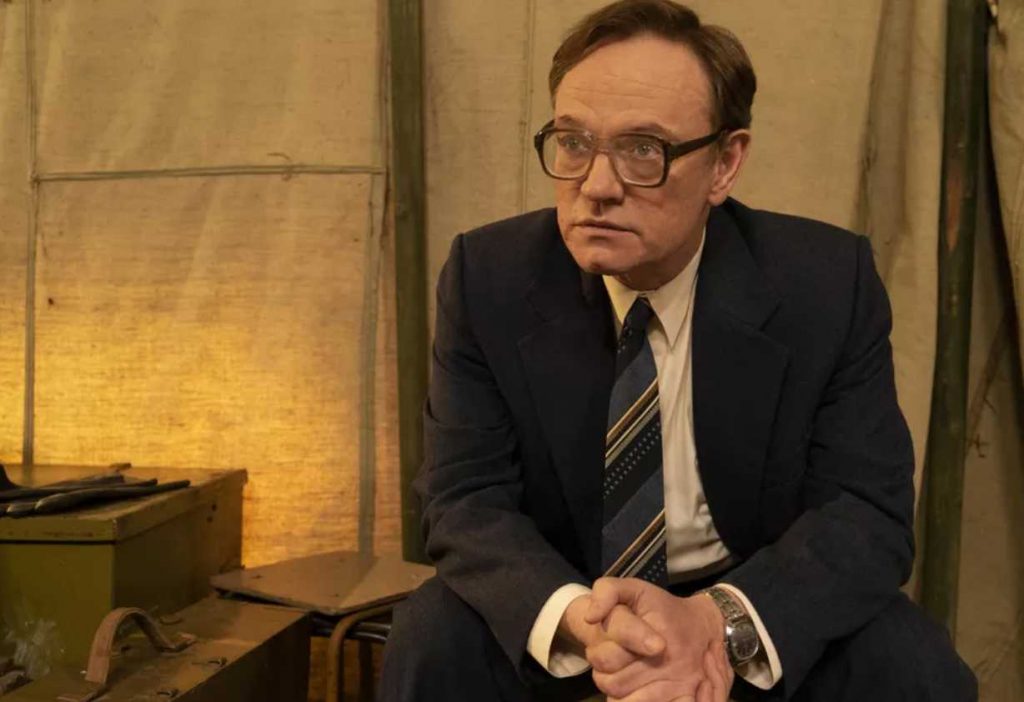 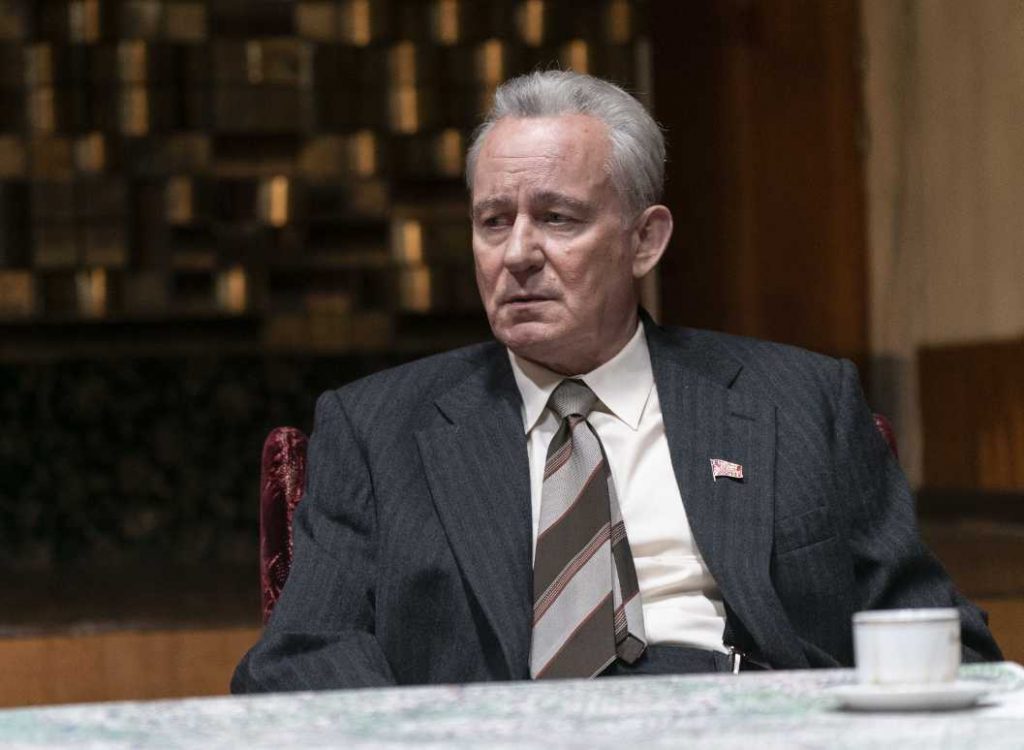 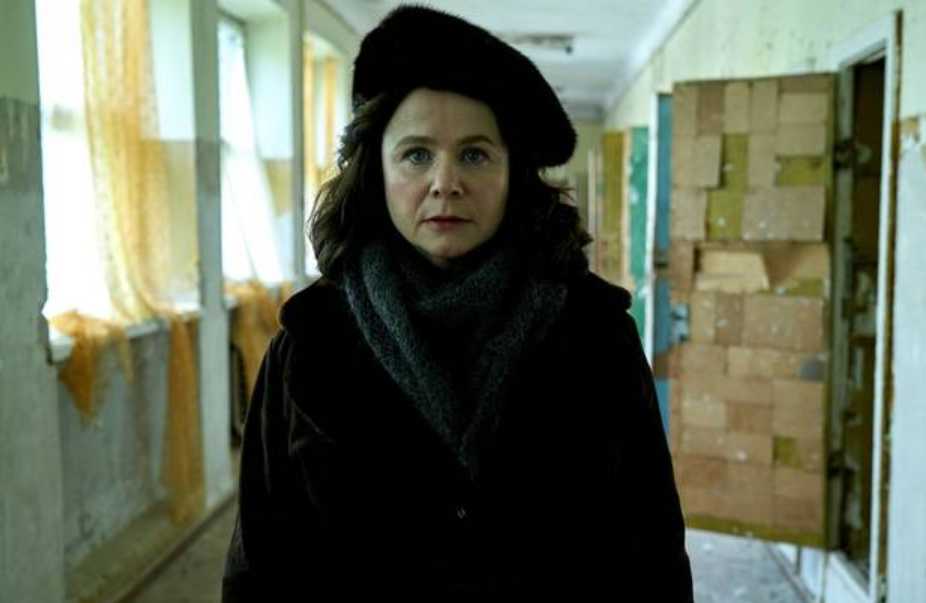 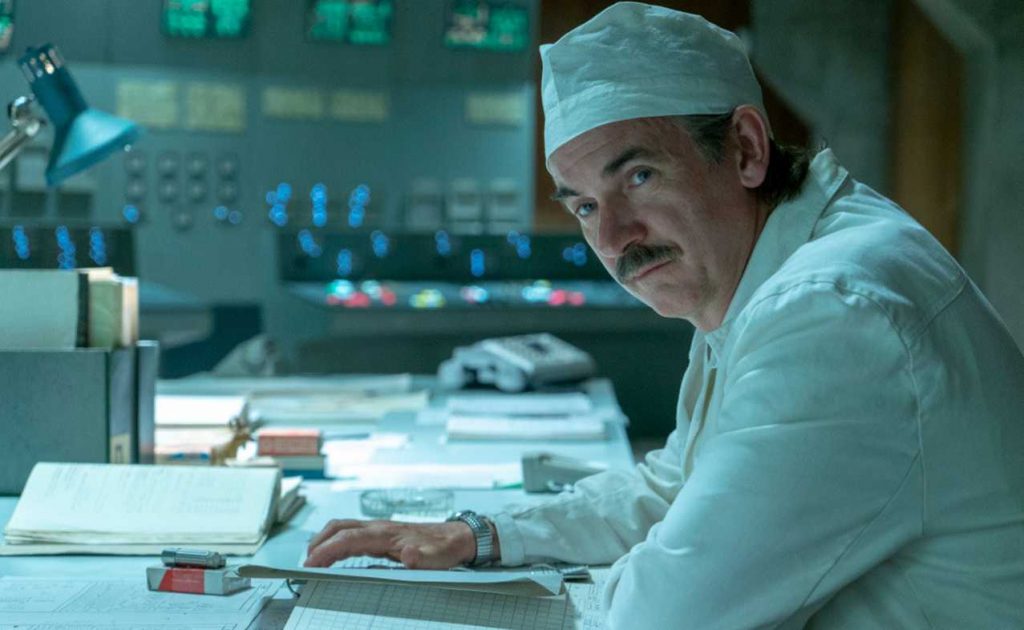 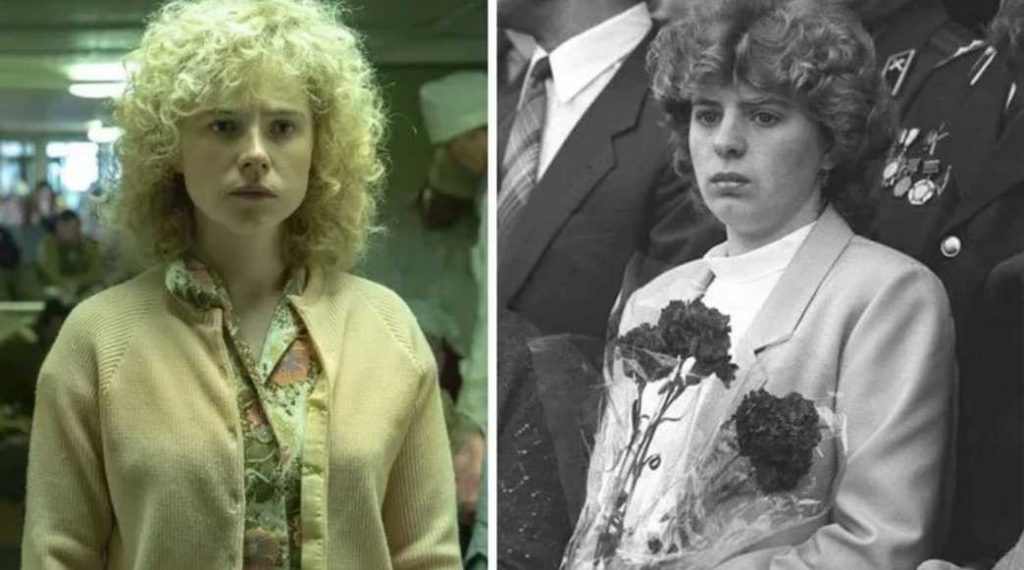 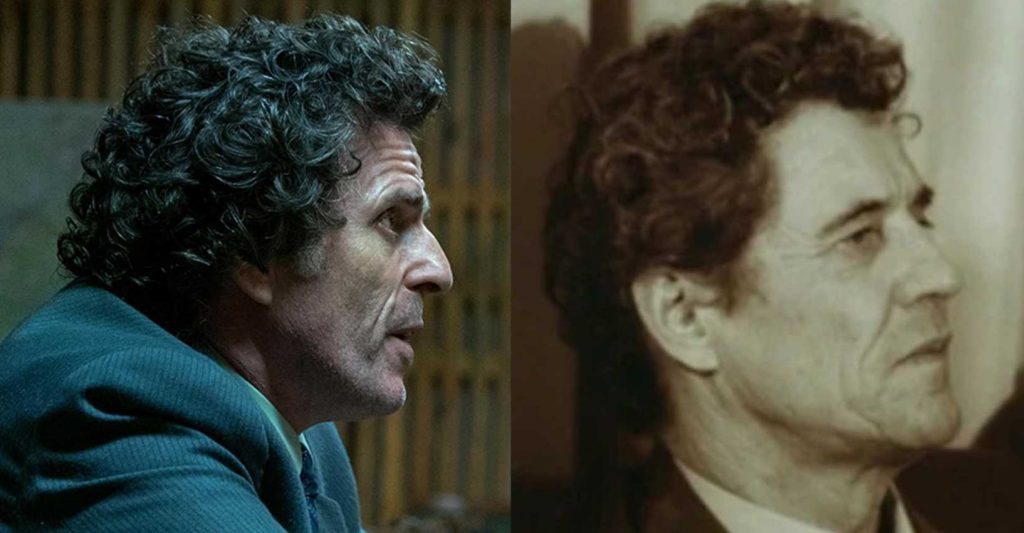 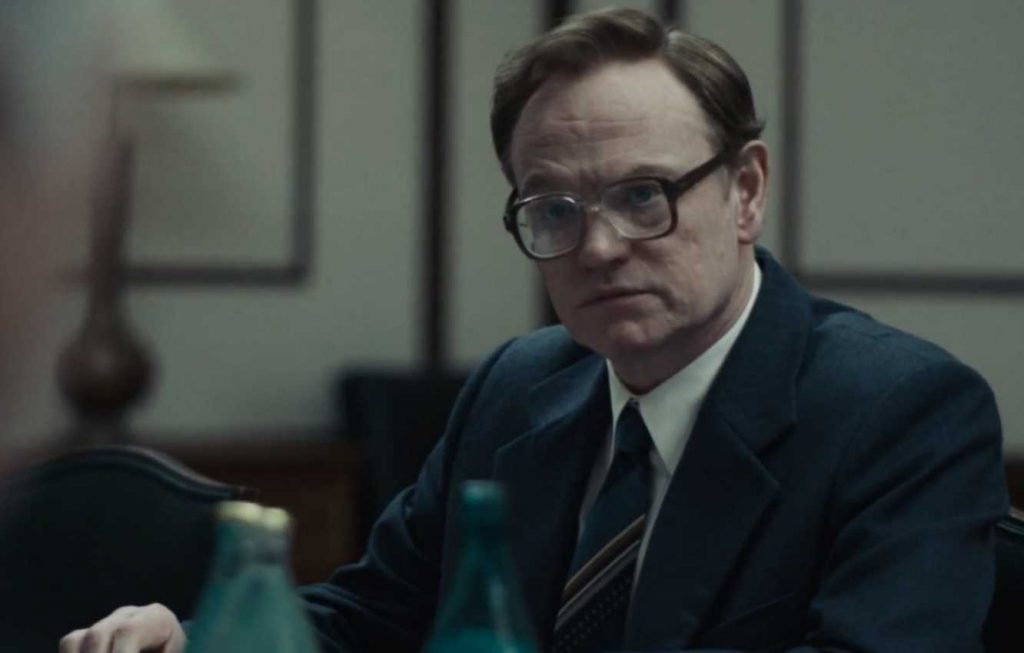 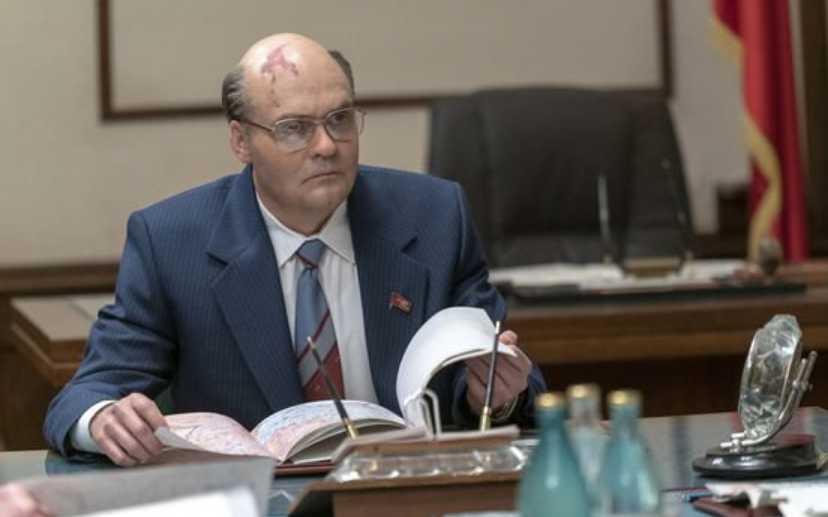 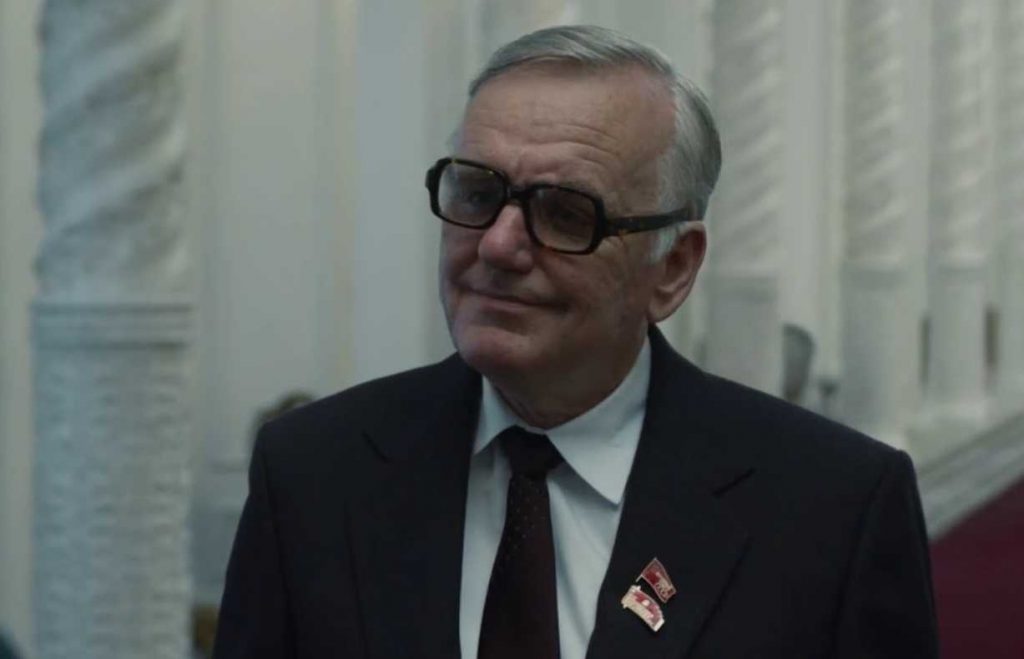 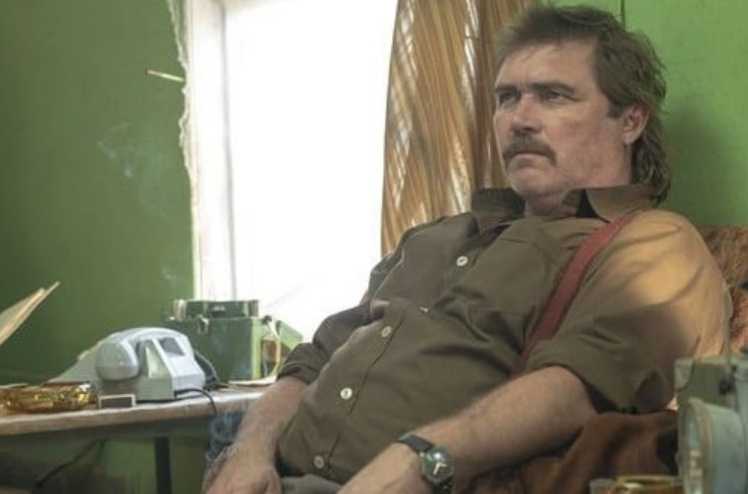 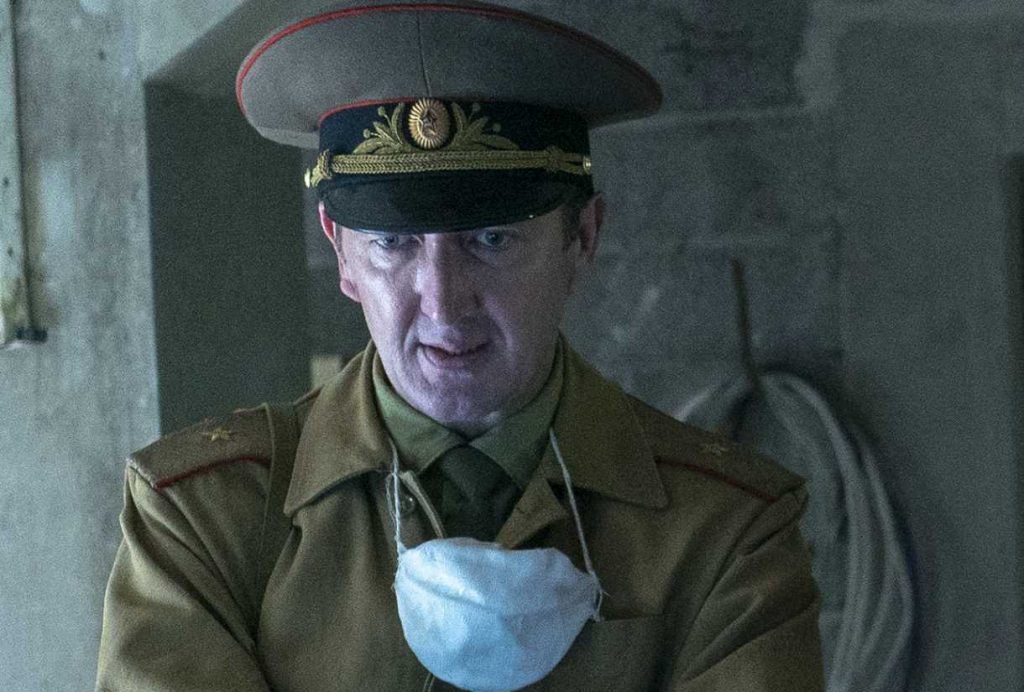 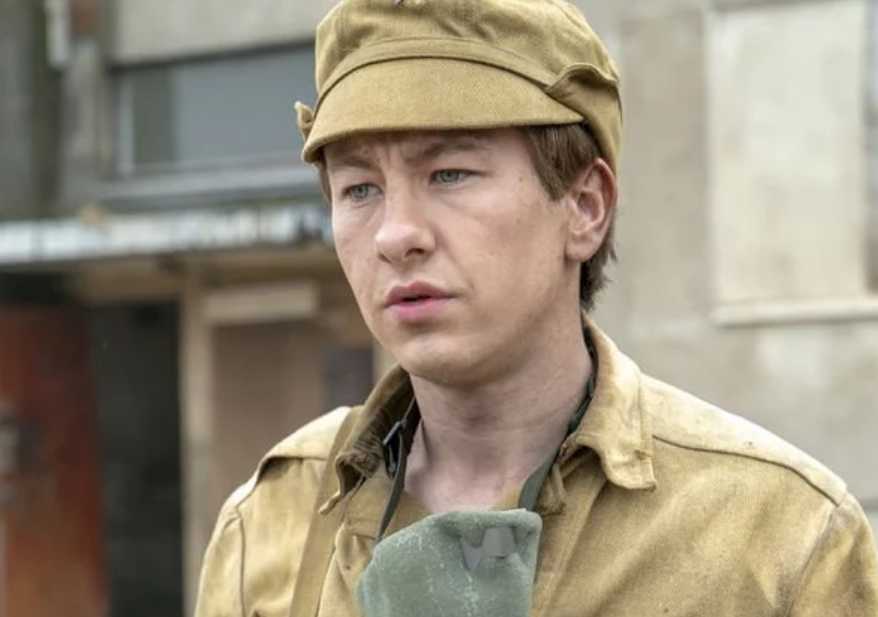 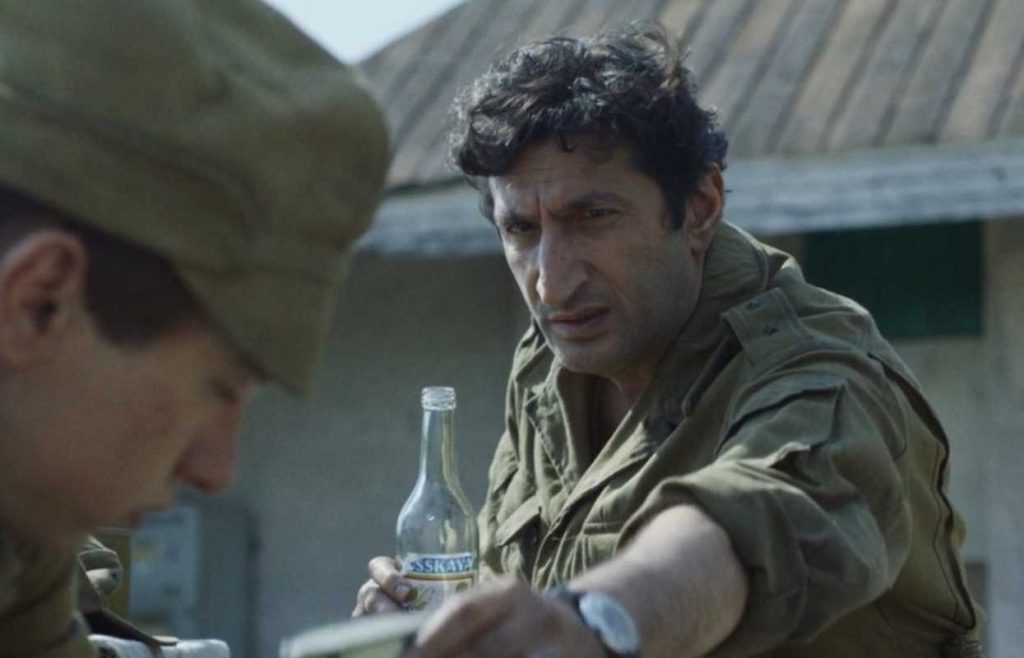 1. Is Chernobyl Series Based On The Real Incident Of The Chernobyl Power Plant?

Yes. The Chernobyl series is based on the real human-made Nuclear Disaster that happened in 1986 in Pripyat City of Ukraine. The disaster occurred due to the explosion in reactor 4 of the Chernobyl Nuclear Power Plant, and its radiation caused Acute Radiation Syndrome in many people for a long time. The series revolves around the mystery behind the explosion and its after-effects.

2. How To Watch Chernobyl Online Free?

Chernobyl series was premiered on HBO channel in 2019, and it is available to binge-watch online. You can either watch it on HBO Go app by purchasing its subscription, or you can enjoy it on Hotstar App, as all the episodes are available there. You just have to download the app, purchase its subscription accordingly, and enjoy the whole series.

3. How Many Episodes Are There In The Chernobyl Series?

As per the Index of Chernobyl, it has total 5 episodes that are available to stream on HBO as well as Disney+Hoststar VIP. Chernobyl season 1 is available along with subtitles so TV series lovers gonna enjoy it like anything!

4. What Is The Duration Of Chernobyl Series Episodes?

Chernobyl series has total 5 episodes and each episode is around 70 minutes long in length. So you can finish this mini-series in one or two days. For the availability and Chernobyl series download, visit this article where we have provided Index of Chernobyl.

Chernobyl TV Series is exclusively available to stream on HBO and Disney+ Hotstar VIP. To download the Chernobyl HBO series, one should check for the platforms, whether they provide offline downloading option or not. In the case of Netflix, it has ‘download offline on app’ feature which is quite useful for many of us.

Sharing pirated content and piracy of the authentic content is a punishable offense and act of crime. We stand firmly against theft. Index of Chernobyl and other information provided in this article are bare to people aware of the mandatory details. In any way, we don’t encourage immoral acts and piracy. It is our request to the users to avoid using websites that share pirated content. Use proper and premium platforms to for Chernobyl series download or stream.

It May Also Interests You: