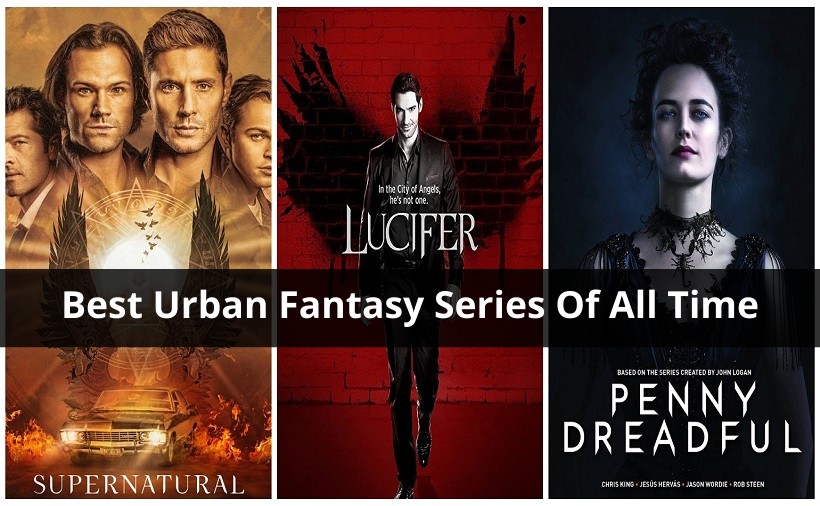 Urban fantasy is a genre that is not for everyone. While some people devour the TV shows, some tend to shy away. One of the main reasons behind the same is the monotony of the plot. The same old supernatural elements and the blood and gore. That is all there is to such series, right?

Well, wrong. If you are a bibliophile, you’d know how addicting Urban fantasy books are. Not only do they bring along a wide range of available variants and themes, but they also do pack in a lot of good plotlines that will leave you baffled by the end.

Suggested: Best tv shows with nudity to watch online if you are over 18

To help you enhance your binge-watching list, we have sorted out some of the best urban series with romance for adults and tailored just for you.

Overview: For a series that has an 8.2 IMDb rating, you know it’s going to be good. If the title didn’t give it away, this series involves vampires. If you enjoy horror and dark fantasy shows, you will like this one. It includes a lot of elements and plot lines that get better with the episodes.

Overview: Released in 2018, this Netflix series is a quick and dark adaptation of “Sabrina the Teenage Witch”. It is mainly a dark coming of age series the packs in elements of horror and occult. If you have watched Riverdale, this is a quick spin-off of the same.

The protagonist of the series, Sabrina, who is half-human and half-witch, tries her best to maintain a balance between the good and the evil side to her. Aside from the darker elements, the movie does contain your typical teenage romantic drama and the angst that you have been craving for. The series is a completely different spin-off to the comics series.

Overview: When we are talking about the Urban Fantasy series, not mentioning Supernatural is a crime that even Sam wouldn’t leave you for. The plot with the Winchester brothers, Sam and Dean, every season of this series brings you something new to enjoy and look up to.

The show has supernatural elements if the title wasn’t a giveaway. That said, it does pack in a lot of amazing appeal with demons and angels and the classic tale of good and bad with some killer storyline that leaves you guessing what is to come. The series was released back in 2005 and has since then gained a lot of popularity.

Overview: Another must-watch fantasy web series is the iZombie. Released back in 2015, this is now available on Netflix. The show has five seasons in total and has garnered more and more audiences with each season, especially because of how well curated the plot of the movie was.

Even though the series was set to see its end in 2018, the last season was produced on demand from the avid watchers of the show. After The Walking Dead, this is likely the best zombie web series that you can binge-watch without any regrets at all.

The plot of the movie highlights the character of Liv, a medical student who turns into a zombie. To satisfy her cravings for human brains, she takes up work at the morgue.

Related: iZombie’s Rose McIver to hang around with Ghosts for CBS

Overview: When talking about Urban Fantasy shows, this American television series is a must-watch. The show has every last element of fantasy that you’d possibly need. From the vampires to the fairies, you name it and the show possibly has it.

Unlike the other ones, this one is targeted towards an adult audience with more mature themes and elements. There are explicit scenes and bad language that you wouldn’t want your 10-year old to listen to. But, all in all, this show brings in a breath of fresh air, especially after the majority of the traditional options available around.

Overview: If you have watched Buffy the Vampire Slayer and wanted an updated version to the same, Angel is the perfect option. It packs in every last element of Urban fantasy that you need for your weekend evening plans.

Angel is a series narrating the story of a vampire, who leaves his true love behind and travels to Los Angeles to get a fresh new start to his life. But, with a dark tainted past, soon things start to unravel in a way that creates a lot of disturbances, hindering him to get the fresh start that he moved for. The show was released in 1999 and has 5 seasons.

Overview: Even though this has a movie version, directed by Tim Burton and starring Johnny Depp, the series is worth a watch. It brings in several elements and a varied plot that makes it worth binge-watching. The TV series is based out of the plot of the movie but is hands down a lot better version than that.

The series follows the role of two characters who chase and hunt down monsters from varying supernatural fields, trying to prevent them from unleashing all the evil. The series was first aired in September 2013 and ran till March 2017 on Fox Broadcasting Company.

The story highlights the character of Nick Burkhardt, a homicide detective, who has the superpower to see things that normal people don’t. He can see through the world of mythical and mythological creatures, making him one of kind. He later finds that he is selected as the latest Grimms meant to protect the world.

Overview: If there is one American teenage horror fiction drama series that has gained immense popularity, it has to be this one. Don’t get confused with the movie under the same name. The plots are nothing alike.

Aside from the amazing plot of the series, every single actor makes it what it is today. With some renowned actors like Tyler Posey and Dylan O’Brien, this TV series is worth all the time you spend.

The plot of the series follows the character of Scott McCall, an awkward teenager in his sophomore year. He turns into a werewolf when he is bit by one and tries to adapt his identity from the world by shielding himself.

Overview: If you are tired of watching similar plots when it comes to the Urban Fantasy movies, this is your safest bet. The reason why this is such a loved series is mainly because of how offbeat the plot of the show is.

Unlike the other fantasy series, this has a different approach to the story that makes you want to watch it from the start till the end. The story is based on a novel penned by Brian McGreevy.

It narrates the story of Hemlock Grave, a steel town in Pennsylvania. The town consists of people living in dire poverty and with filthy rich people. As the season progress, you come to realise that every single resident in the town has a secret nobody knows of.

When there is a killer on the loose, Vanessa Ives recruits Ethan Chandler and Sir Malcolm to catch the killer. But, as soon as they come close to catching the killer, they realise that they are up against a non-human entity, something that they likely can’t compete against.

The series was released in May 2014 and went on till June 2016 and has three seasons in total.

Overview: Even though this doesn’t have the traditional elements that define Urban fantasy, this is likely one worth mentioning in the list. Set within the horror genre, it has elements involving witches and dark entities that make up the story.

Coven features a very enticing plotline. But, that is not what makes this stand out. The series packs in a lot of amazing humour that will make you giggle one moment and then scream out in fear in the next.

All the actors in the series have managed to make this a success with the acting. The show has nine seasons in total.

Overview: If the title of the series wasn’t a giveaway, this one deals with witches and supernatural elements. The plot of the series is based out of the 1800s when the presence and concept of witches were in its prime.

The plot of the story weaves the basic history behind the place and amazing turn of events throughout. The main characters, John and Mary, who are romantically involved, find themselves stuck amidst the lies of a supernatural town that is consistently hiding behind a bed of lies and secrets. The show has three seasons and first aired in 2014.

Overview: You are likely searching for a list of the best supernatural and urban fantasy series after watching Lucifer. That is how addictive the series is. Available on Netflix, this series deals with the concepts of demons and evil.

The pivotal character, Lucifer, is a demon who has returned from hell to Los Angeles and runs a club in the city. Things progress as he gets involved with the local police authorities of the state to help them solve crimes and murder cases. The show first aired in 2016 and is currently on its fifth season airing in August 2020.

Overview: Last in the list of the best Urban Fantasy series is Lost, Girl. For a series that last aired in 2015, it sure has a consistently rising audience even to this day. The show does incline more towards a female audience but you can watch it nonetheless.

The series narrates the story of Bo, a small-town girl who is on the run following a case of bad sexual assault that ends up with her boyfriend’s death. She soon comes to know that she is not your typical human and a succubus instead, someone who feeds off of other people’s sexual energy.

1. What Is The Best Urban Fantasy Series On Netflix?

Naming one Best Urban Fantasy Series on Netflix among this lot of good ones is difficult. But to name some of the best TV series to watch on your free time are listed below They are:

2. Is It Possible To Download Urban Fantasy Series On Netflix?

3. Can We Watch Urban Fantasy Series Online For Free?

No, Almost all the Urban Fantasy series listed in this article are only available to watch on Premium OTT platforms like Netflix, Hulu and Amazon Prime etc. you need to take a paid monthly/annual subscription to watch.

Urban fantasy series is more than the tedious and boring plotline. They harbour several twists and turns with a thrilling plot that you wouldn’t want to stop watching. Every single option that we have mentioned here has a plot that is different than the other. With elements of horror to some riveting plots with historical significance, the list goes on. We hope you find something to binge-watch this weekend.

Here at Bingepost, We don’t encourage any piracy or pirated content. We are just providing legal information that is available on the internet. The content material that’s given above is simply to provide the wanted details about unlawful actions. Will advise you to watch the movies/series directly on Netflix, Prime, Hulu, or any other OTT Network Premium by taking its annual/monthly subscription To support their platforms and original content creators. All the links available in this article are legal and official for entertainment purposes only. Binge-Watch & Chill!